Home » Alumni » Education » WOU in the news » WOU in the News: To Improve Teacher Diversity, Salem-Keizer Focusing on Training its Own Students, Classroom Aides 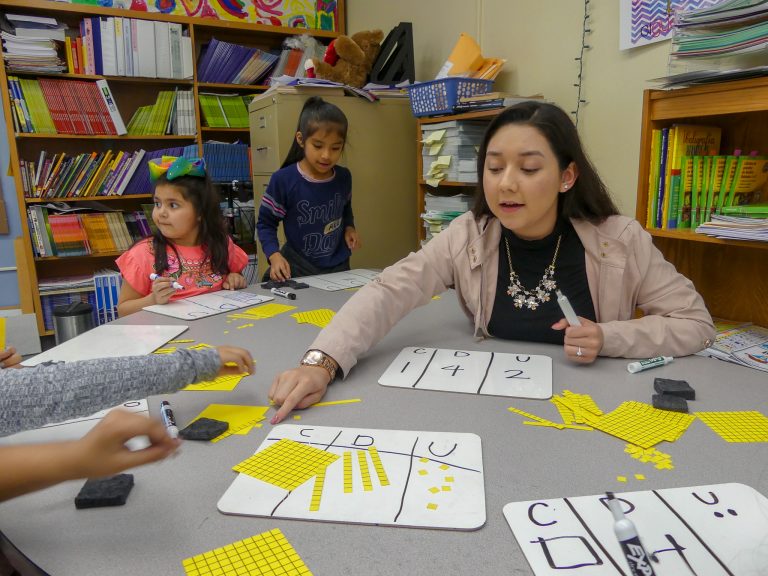 Jessica Zamarron was inspired by her first-grade teacher at Swegle Elementary.

Seeing Karina Rodriguez, another bilingual Latina, in front of the classroom, Zamarron knew her teacher had similar life experiences. If she had a problem at home or needed advice, Rodriguez was the teacher she went to.

“I related to her,” Zamarron said. She remembered thinking, “She’s kind of like me and she’s a teacher, maybe I can do it too.”

Zamarron is now in the final year of a bilingual teaching program at Western Oregon University and helps in Swegle classrooms as part of her training.

But her inspiration for becoming a teacher – seeing another Latina at the front of the classroom – is one that’s not available for many Salem-Keizer students.

Salem schools are among Oregon’s most diverse. About half the district’s roughly 42,000 students are white, and 40 percent are Hispanic or Latino. Nearly one-third grew up speaking a language other than English at home, with Spanish by far the most common.

Yet roughly nine out of 10 of the district’s 2,000 teachers are white, and most don’t speak Spanish.

Research shows that students perform better on tests and have fewer absences and suspensions when they’re taught by a teacher of the same race.

That’s in part because teachers of color tend to have higher expectations of students of color than white teachers do.

“Students of color that have at least one teacher in their K-12 experience that look like them have a better opportunity to graduate and be successful,” said Cynthia Richardson, Salem-Keizer School District director of student equity, access and advancement.

Before moving to that job in 2017, Richardson was the first black high school principal in the district, spending seven years at McKay and another seven at North Salem. During that time, the district became more racially diverse.

She found other staff sometimes had blind spots about students’ abilities and tended to recommend mostly white students for honors and advanced courses.

Increasing teacher diversity is an issue Superintendent Christy Perry made a priority in the four years she’s been at the district.

“Our kids need to see themselves in our educators in our schools,” she said. “I know it matters for kids.”

Teachers from the same cultural background may also have an easier time understanding and relating to their students.

Ben Reyes Arellano, a bilingual kindergarten teacher at Chavez Elementary, saw the difference Latino teachers can make when he was a student.

He grew up speaking Spanish at home and was in bilingual school through seventh grade in Anthony, a small border town near El Paso, Texas.

In eighth grade, he moved to all English classes. His science teacher spent the year mocking his accent.

“She would say, ‘Shame on you,’” when he spoke Spanish, Reyes Arellano said. “I didn’t learn a thing.” When he needed help or advice, he sought out bilingual teachers, who encouraged him.

Now, Reyes Arellano wants to serve as a model for his students. Many come from families of migrant workers who may not have gone to college, he said. He wants to show them that higher education is a possibility.

“I have very smart students. They can do it,” he said.

Salem-Keizer isn’t alone in wanting a more diverse teaching workforce, and the district has worked to recruit more teachers of color, particularly Latino teachers, for years.

But those efforts often yield teachers who stay only a few years before moving for a job closer to home.

Under Perry’s leadership, Salem-Keizer has taken a new approach: find people already in the district who want to become teachers and help them qualify.

Nelson said the district had been chronically short of teachers for bilingual programs, especially in elementary school.

To fix that, the district took a two-pronged approach. Four years ago, it began recruiting bilingual high school students like Zamarron who had shown an interest in teaching.

The district negotiated a tuition discount with Western Oregon University, which students can receive in exchange for agreeing to spend a minimum of three years teaching for Salem-Keizer after earning their licenses. Teachers who don’t stay with the district that long must repay some of their tuition.

Zamarron is part of the first year of students to graduate from Western Oregon as part of the program. She hopes to begin student teaching elementary school next fall.

To fill gaps while those teachers were in school, the district also began paying tuition for classroom aides to become teachers through a partnership with Corban University. Over two years, that program paid for 25 aides to become licensed bilingual teachers at a cost of $230,000. Twenty-two of them are still teaching.

These aren’t new ideas, Nelson said. Salem-Keizer has periodically started programs to help train a more diverse teacher workforce. But those programs have typically been driven by grants or other funds that only last a few years.

“Once the grant dried up or the funder decided to fund something else, the program went away,” Nelson said.

What’s new is Perry’s commitment to directly fund this training, he said.

The district has spent about $115,000 over two years to support 24 aides and teachers in the diversity pathways program.

Brent Turner, a classroom aide and football coach at North, will finish his teaching program in April because of such support.

He grew up in California in a poor family where his parents lived paycheck to paycheck, an experience many of his students can relate to.

“My grandma did a great job with me and my young siblings. When we got home, it was always homework first,” he said. He discovered a love of English, particularly Shakespeare, which he hopes to share with his students.

Ricardo Larios, a Waldo Middle School leadership teacher, is among the recruits training to become an administrator. He’s been with the district for 12 years and was named the best educator in Oregon by the Milken Family Foundation in 2016 for his efforts to connect with students and families.

Sometimes, Larios said, those connections come through simple moments in the hall. He high-fives students between periods and will tell Spanish-speaking students “¡Apúrate!” — hurry up — if they’re running late. His goal is to sound just like their moms at home.

“It immediately creates a bridge between their home and their school,” he said.

Larios said Richardson called him early in the 2017 school year and asked, “Are you ready to be an administrator?”

“I was like, ‘No, I gotta go pick up my kid,’” he remembered saying. But eventually, she talked him into applying. He started an 18-month online educational leadership program at Concordia University last January.

Zamarron said she’s grateful for the district’s help in becoming a teacher and thinks a more diverse group of educators is something all students can benefit from.

“In high school, the teacher try to prepare their students for the real world,” Zamarron said. “The real world is made up of people from everywhere.”

This article was published in the Salem Reporter and written by Rachel Alexander.