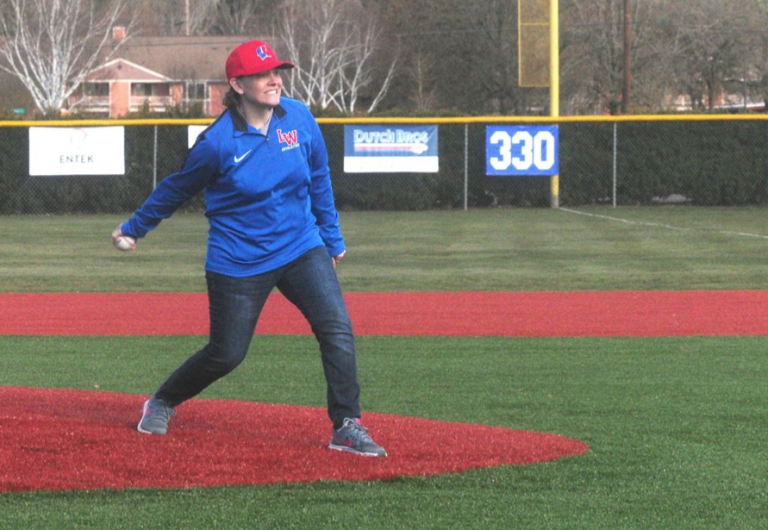 What could be worse than finding out that you have cancer?

For Anne Williams, it was being told that she would not be able to teach this year at Lebanon High School.

For Williams, 42, the diagnosis of colon cancer came as a relief after she had started to not feel well last July.

“It came on very, very quickly. I woke up not feeling like myself and had the worst back pain I’d ever had in my life,” she said. “I had been incredibly healthy.”

So when she went in for a colonoscopy in September, she was certain the test was going to show something, and it did.

“I wasn’t upset, I was relieved that I had a diagnosis. I didn’t get upset until October when my doctor said I couldn’t go to work anymore. That was more devastating than finding out I had cancer,” Williams said.

Williams has spent much of her life teaching language arts at Lebanon High School. She grew up in Portland and went to Western Oregon University, earning both her bachelor’s and master’s degrees there.

This is her 21st year at LHS and she and her husband, Bryan, have settled into life in Lebanon with their son Jack, 13. Bryan is a longtime employee at Linn Gear.

A year ago, Williams felt on top of the world. She was named the 2017 Educator of the Year at the annual Distinguished Service Awards. Now she is facing a very different challenge.

Williams launched a first round of chemotherapy in October followed by a surgery to remove the tumor. She suffered a setback in January and had to undergo an emergency surgery after going into kidney failure.

She has bounced back from that and is now undergoing a second round of chemotherapy, partly to attack the cancer which has spread to her liver. When this round is complete, she will have an operation in June to remove whatever cancer remains in the liver.

“I’m just going to fight. I’m very competitive. The cure has not been taken off the table,” Williams said. “That’s what I’m working for every day, we’re still working toward a cure.”

Both of Williams’ paternal grandparents had colon cancer, although their cases did not develop until much later in life. Both underwent successful surgeries and lived healthy lives after. Williams has learned that she has a gene mutation which makes her more susceptible to having colon cancer.

At the same time she is facing this struggle, her brother James is in his own fight against brain cancer. He was diagnosed five years ago and has had to undergo numerous procedures to extend his life. He is also a school teacher and lives in Rochester, Minn. Williams is thankful that he has received top-notch care at the Mayo Clinic.

“This, sadly, has brought us together,” Williams said, saying that they communicate much more regularly now than they did before their health issues. “He’s been through hell and back compared to what I’m going through.”

The family’s friends have been extremely supportive and meals are delivered almost every night. Still, one of the main issues she faces is the isolation of being at home and not at work. She loves the social aspect of teaching in a high school and misses it dearly.

Sports has gone a long way to meeting her need to personal interaction. Jack Williams played football and basketball this year at Seven Oak Middle School and is now starting track and field. Attending his games was therapeutic.

“It gives me something to look forward to,” Williams said. “Almost every day there’s something.”

In addition to her son’s sports schedule, Williams has also been embraced Lebanon High School athletics. The Warriors wore a ribbon sticker on their helmets last fall honoring Williams and the volleyball squad wore blue ribbons on their shoelaces.

This spring, the baseball team has dedicated its season to Williams, who threw out the first pitch at the Warriors’ season-opener last week against St. Helens.

The Warriors’ caps have Williams’ initials stitched on the back as a season-long reminder of their support.

Warriors baseball coach Jeff Stolsig had Williams speak to the team before the start of the season.

“It’s very humbling,” Stolsig said. “Our kids gain an appreciation for what they do have.”

He thanked his wife, Lori, the athletics office manager, for suggesting and helping organize the first-pitch ceremony.

“She’s very close to Anne and it was a great idea,” Stolsig said.

Williams said she is the one who benefits from the interaction with the teams and says her message is very simple.

“You can’t win a game alone and you can’t fight cancer alone,” Williams said. “It’s about being positive and how amazing our community is for supporting me and my family. I know if something happens to me, this town is going to take care of my son.”