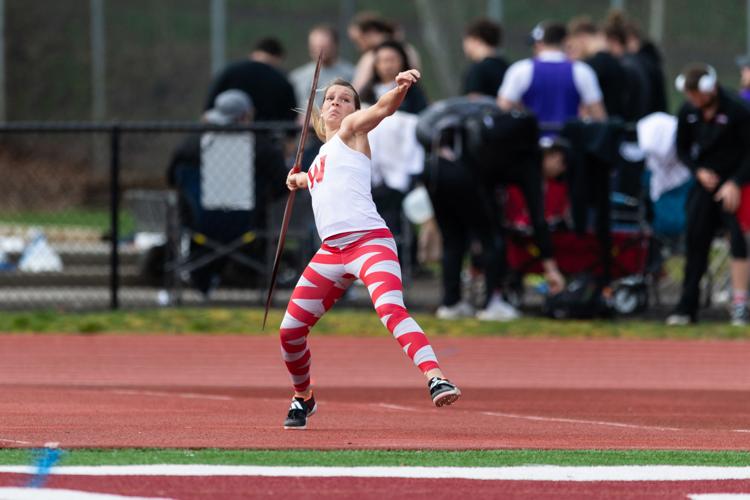 MONMOUTH — Darian Wilson had an impressive start to her collegiate athletic career on the Western Oregon University track and field team last year, when she competed in the NCAA Division II National Championship for javelin, came in seventh, and picked up an All-American accolade along the way.

A freshman then, Wilson said she had so much fun last year that she changed her major from the two-year nursing program to community health because of track.

“Last year was awesome,” she said. “It was fun. I changed my major because of last year so I could be here longer. I got to go to nationals, that was really cool. A little bit eye-opening, like, okay, I guess I’m not just this little, small-town girl.”

Originally from Coquille, Oregon, a small town on the southern Oregon coast, Wilson said going into the national championships was a little overwhelming.

“It freaked me out,” she said, laughing. “I didn’t know what to expect. I’ve never been a part of something like that before. I mean, state in high school, it’s like all the kids in your division, but not people from all over the United States. I remember asking one girl, like, ‘yeah, where are you from?’ and she said something like, ‘Texas,’ and I was like, ‘wow these are people from literally everywhere.’”

She tossed a 145-2 at nationals for her seventh-place finish.

Now, she’s onto her second year with the Wolves track team following an indoor season that she said went OK.

“Indoor, that’s really not my specialty, it’s my I-need-to-improve event, so it was OK,” she said. “It was a little rough. I think the one thing that stood out for me was, one of my most confident events in high school, which is long jump, was, we’re kind of trying to change how I do stuff, so I’m kind of taking a few steps back, and I’m not hitting the marks that I’d like to be hitting, but I mean, you have to take a few steps back to take a few more forward, right? I hope.”

The outdoor season began on March 2 at Willamette University in Salem, and on March 9, Wilson unleashed a meet-winning javelin distance of 139-0, which tops the NCAA DII provisional barrier of 136-5, and dropped her to the No. 4 mark in the country.

The big question for her this season is whether or not she’ll have another chance at nationals.

“I just have a bunch of little things I need to figure out, but once those all meet together in the middle, I think it will click and I think good things can happen,” she said.

This article is published by the Polk County Itemizer-Observer and written by Jennifer Biberston.