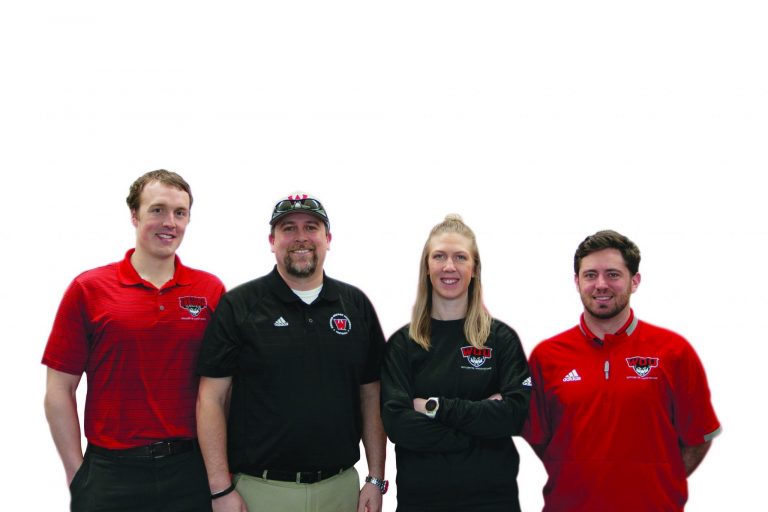 Long-time Head Athletic Trainer Kurtis Kidd retired in 2018 after 30 years at WOU; that kind of longevity could be intimidating for athletic trainers who follow in his footsteps.

The current team doesn’t look worried. They appreciate the processes Kidd created and plan to build upon them.

“Everyone has their own style, their unique abilities that they bring to the table, but we are using Kurtis’ foundation as the basis to help us grow and progress,” said Chris Thew, the associate athletic trainer who works primarily with the football team.

Alyssa Asay is the new head athletic trainer after working last year with Kidd. She takes care of the women’s basketball, baseball and volleyball teams. Rounding out the athletic training staff are Bo Johnson, another second-year team member who works with cross country and track and field, and Brandon Walcott-Ayers, who is new to the team and works with softball, cheer, men’s basketball and soccer.

No matter how long athletic trainers have been in their jobs, building relationships with coaches and student-athletes is the key to success. The WOU team agrees that establishing trust is vital in their line of work.

“We each kind of find our own way of bringing our personalities into the relationship,” Johnson said. “That helps (coaches) to see us as not just a worker bee. It’s more of a personal relationship.”

Walcott-Ayers takes a straightforward approach when working with students, who can be reluctant to open up. “I found that just being pretty brutally honest with them and talking with them as much as possible really helps build that trust,” he said. “They won’t talk to you if they don’t trust you, and having them talk to you is the only way you’re going to know when something’s going on.”

Laughter breaks out when topic of job confusion comes up. People constantly mistake what they do—medical care and injury rehabilitation—for what strength and conditioning coaches do. “We’re not just water carriers, either,” Thew says with a chuckle.

In the end, they all agree, the important thing is not whether they are recognized. They are there for the Wolves teams, of which they feel personal ownership.

“The best reward is working with an athlete who was injured during the season and progressing them through the recovery process to get them back on that field or court,” Asay said as her staff nodded. “You create a bond with that athlete because you see them every day. The minute they are able to first start running again or something, you are part of that with them.”