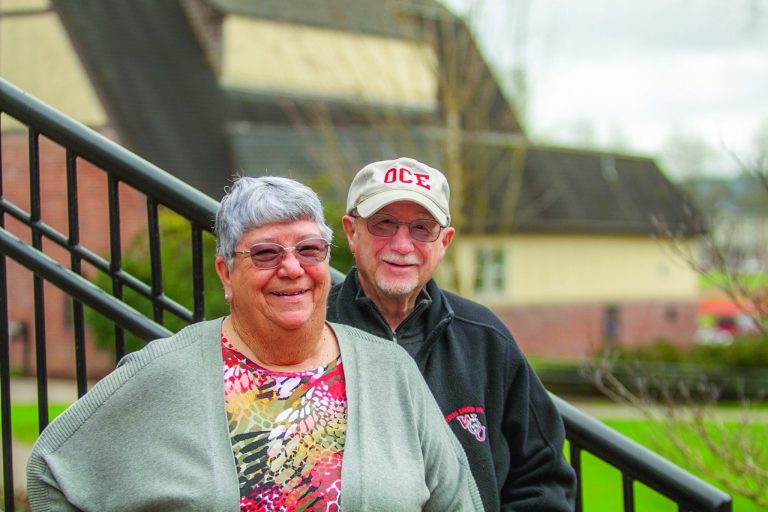 Donna and Clark Hamor recently became Sustainers with the WOU Foundation, but
their support for the university goes back for decades, a fact borne out by Clark’s
collection of time-hopping WOU clothing.
Donna, a WOU grad from the OCE era who earned a bachelor’s in 1970 and a
master’s in 1976, and Clark, who graduated with a masters in educational media in
1977, have been volunteering their time to boost WOU’s visibility throughout the Pacific
Northwest. Donna routinely mans the WOU Admissions booth at college fairs, and she
represents the university during weekly Greeters events with the Salem Area Chamber
of Commerce. Clark participates, too, because that’s how it works for them.
“Our marriage philosophy has always been that if one of us is passionate about
something, the other one does it, too, to be supportive,” said Donna. Clark represents
one of his alma maters, University of Montana, at college fairs and touts Travel Salem
at Greeters.
The Hamors’ double-team approach works well for a lot of reasons. One is longevity:
“You have to keep the mind and body active,” Clark explained vehemently. “I’ve lost too
many friends who retired, went home, sat down with their coffee cup and cigarette and
that was it.”
Clark has been involved in the WOU Alumni Association for more than a decade,
serving as a board member, secretary, vice president, president and past president
during that time. He’s about to finish his current term in June.
“We got involved because it was a way to give back without giving money,” Donna
said. “Though in recent years, we’ve been able to do that, too, because the university
needs that.” In addition to being Sustainers, they donate to their favorite university on
Giving Day; they participated in the Morton Memorial Lobby fundraiser; and they provide
items for the Wolves Athletic Auction each year.
When asked why they support WOU with their time and money, Donna doesn’t hesitate
to answer: “Because it’s an awesome university. It meets the needs of the kids not only
from the large schools but more importantly from the smaller schools in the state. It’s a
place where they can come, be active and not get lost in a crowd.”