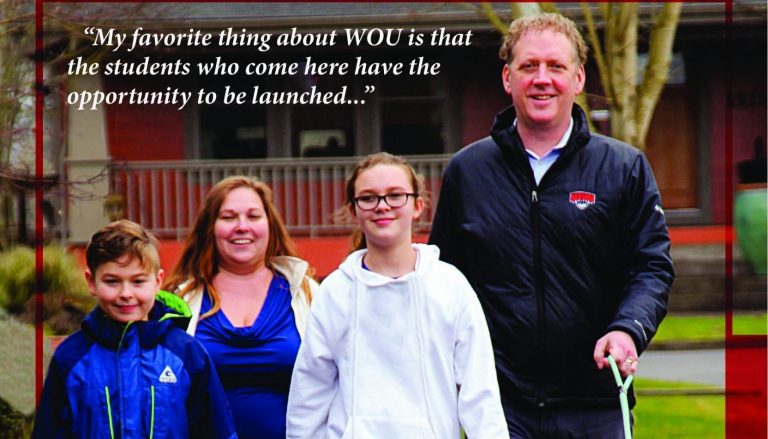 Rob Winningham took over as provost and vice president for
Academic Affairs at the beginning of March, but he has been
a fixture at Western Oregon University for nearly 20 years.

He started in 2000, just a month removed from defending his doctoral thesis in neuroscience at Baylor University in Texas. As an assistant professor of psychology at WOU, he had his sights set on tenure. But in 2002, something else caught his eye: a helpful collection development librarian at Hamersly named Camila Gabaldón.

“I had checked out a laptop at the library, but it wouldn’t work off campus because it wasn’t hooked up to the internet,” Winningham recalled.
“I was pretty upset and asked to talk to a librarian about it. I couldn’t be too mad when she came because she was so helpful. And we married three years later.”

Winningham’s concise summary of the couple’s early years omits quite a few details. He moved up to associate professor in 2005. Soon after starting at WOU, Gabaldón-Winningham had shifted her focus in the library to technology. “Database design and website stuff have always been my jam,” said Gabaldón-Winningham, who earned a bachelor’s at Willamette University and a master’s at Emporia State University in Kansas.

The couple have always been involved with both their on-campus and off-campus communities, but the bond was cemented in 2007, when they started having children. There happen to be many WOU-based couples, and those who were building their families at that time grew close. They remain so today.

“This is our community,” Winningham said. “It’s hard for us to tell where our workday ends and our personal life begins,”

“For better or worse,” Gabaldón-Winningham interjected.

“When we started having children, Camila was reaching out to faculty with young children of the same age, so we had this really strong cohort of people, which is a really neat thing for us and the kids,” he continued.

All four of them went on an epic journey last summer, spending six weeks traveling Europe and Morocco. The tour took them to Iceland, Switzerland, Italy, Germany, France, Morocco and Spain, where they stayed put for three weeks on the shores of the Mediterranean. The kids attended a Spanish language institute during the visit.

“It was a wonderful experience,” Winningham said. “Morocco was really memorable.”

Despite both being academics, the couple aren’t certain whether they’ve raised their children with an overly education-focused approach.

“You know, it’s hard to tell because we’re surrounded by friends who are also academics,” Winningham said. “I guess it’s fair to say our parenting has been largely scientifically based because Camila is a science librarian. You have to be careful what you research though because sometimes it’s better to not know all the things that could happen to your kids.”

One thing they are sure of, however, is that they are all in for WOU no matter what. Both have provided leadership over the years for the betterment of the university; Winningham created the state’s first four-year gerontology degree and served as interim dean of the College of Liberal Arts and Sciences. Gabaldón-Winningham has created online four-year plans that help WOU students reach graduation and played an important role in the recent general education program redesign. She’s also the faculty adviser for the Alpha Chi Omega sorority.

They want to do anything they can to help students succeed at WOU, and the possibilities surrounding that objective have them both excited.

“My favorite thing about WOU is that the students who come here have the opportunity to be launched,” explained Winningham. “Upward mobility still exists here. I don’t think that’s true of a lot of schools. Mobility not only changes students’ lives, but it changes generations—their children’s lives and their grandchildren’s lives.”

Gabaldón-Winningham’s support for WOU is part of her heritage. “I grew up here. My entire life has had Western as part of it. In high school I’d come to study in the library. Even in elementary school, I’d come here to take violin lessons with some of the music professors,” she said. “My parents both earned degrees here. Western’s success is huge thing for me. That’s why I wanted to be part of the process when the gen ed reform came up.”

It’s not a stretch to imagine Winningham’s shift from faculty member to provost could be a difficult one, but Gabaldón-Winningham is convinced her husband’s dedication and openness will carry him through the change.

“Rob’s transition has been easier because he listens,” she said. “And he’s made it clear he will continue to listen. It’s not like he’s shutting his door and hiding in the office all day. It just works best if everyone tries to do their best to communicate with everybody.”

“When I’m all done with this, I hope people will say ‘He was transparent, and he sought our input’, ” Winningham said. 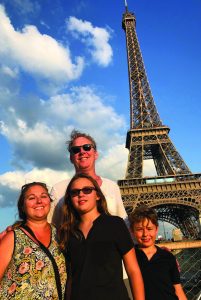 The family took a six-week trip last summer that included Paris (left) and Morocco (below). 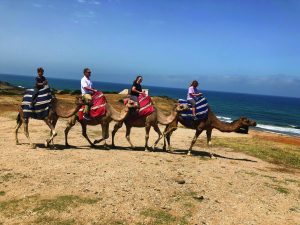 The family on its European trip. 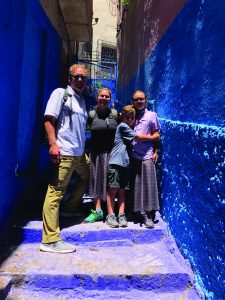