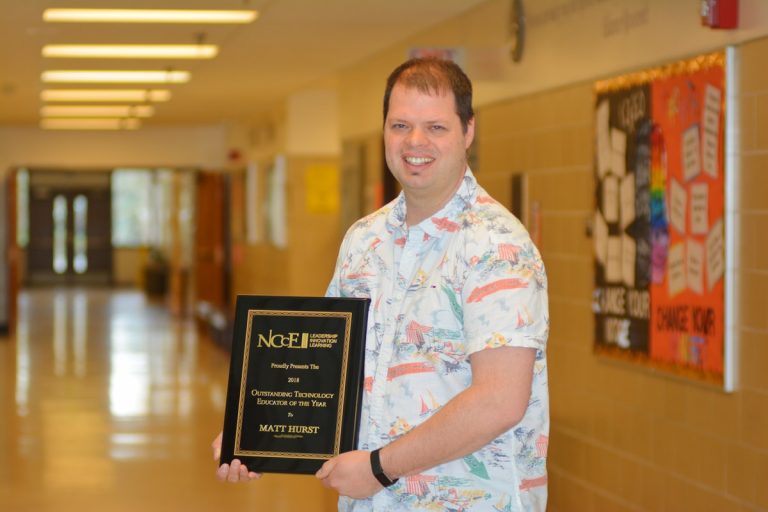 Matt Hurst has always gone beyond the call of duty to help the teachers and students with whom he works. And back in February, it was clear that his dedication didn’t go unnoticed.

Hurst, who is an instructional mentor at Whiteaker Middle School, was honored with the 2019 Outstanding Technology Educator of the Year award, which was given by the Northwest Council for Computer Education (NCCE).

“It was a total surprise. I had no idea,” Hurst said. “It was quite an honor to be recognized. I just feel blessed.”

Hurst was honored for being a strong peer leader and instructional mentor while attending the Northwest’s largest educational technology conference in Seattle.

As a highly experienced educator, Hurst uses his skills and expertise to be a mentor and coach to other teachers at Whiteaker — often times showing teachers how to implement technology into their instruction.

“I am solely here to support teachers and the goals that they have,” Hurst said.

After receiving his master’s in teaching at Western Oregon University, Hurst taught English Learning Development for five years in Southern California before moving to Keizer in 2007 to teach ELD at Claggett Creek Middle School.

But with only experience teaching at the high school level, working at a middle school was a bit of an adjustment for Hurst.

“I had a hard time transitioning from high school to middle school, especially in teaching students with low language levels and a lot of other challenges compared to what I was used to in high school.”

However, after meeting with DeWitt — who was an instructional coach at Claggett Creek at the time — Hurst was able to come with a more effective way to teach his class by breaking them up into three separate stations.

“After I implemented that, the kids were much more engaged because it was like having three different classrooms in one,” Hurst said.

Hurst wanted to expand on that idea with the use of computers, which is how he first got hooked on introducing updated technology to his students.

When Hurst moved to teach at Houck Middle School in 2013, he continued to build on what had been working for him at Claggett Creek.

“I felt like I was ready to take the next step of using technology in the classroom,” Hurst said.

Along with teaching a language development class, Hurst also taught an iPad elective, where he instructed kids on video production, coding, photography, editing with apps, computer programming and computer science.

“It was a big challenge because I had to come up with my own curriculum essentially,” Hurst said. “But it was fun to let kids explore different areas of technology.”

“I wanted to give kids career explorations through technology.”

In 2015, when Whiteaker had an instructional coach position available, DeWitt knew who the right person for the job would be.

“You want someone who is a learner first, but also someone that the staff really trusts as they implement new strategies,” DeWitt said. “Matt totally fit the bill.”

Four years ago, Whiteaker was a technology poor school that had outdated computers and didn’t have access to things like iPads or Chromebooks.

But after just a year at the school, Hurst was vital to making sure that changed.

Thanks to district help and dedication of school funds, Whiteaker has purchased new sets of Chromebooks and iPads in each of the last three years that can be checked out to be used in the classroom or the library.

The move has also very cost affective as the school has been able to spend significantly less money on computer repair, as well as their print budget.

During the technological transition, Hurst did all kinds of trainings for teachers on how they could implement the new technology in their classrooms.

Hurst even does similar trainings all across the district and state.

“One of the reasons I was hired in this position was because of the technology that has been changing in schools,” Hurst said. “That idea was foreign to a lot of teachers.”

Last summer, Hurst even hosted a technology camp for eighth graders that featured circuitry and electronics, plus engineering and product design.

“There’s a lot of really innovative and fun ways for kids to access learning opportunities through technology. It’s the wave of the future. Kids are using a lot more of it in daily life.”

“It’s nice to give them a technical skill that they can fall back on.”

This article is published by Keizertimes and written by Matt Rawlings.