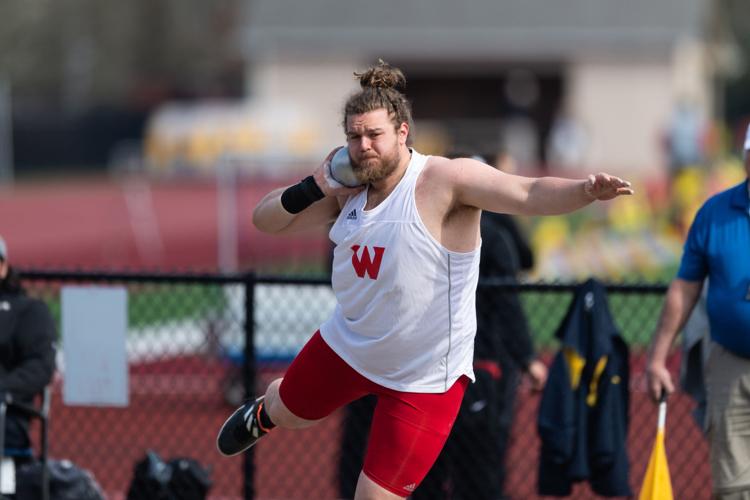 MONMOUTH — There’s nothing like coming back to the roots from which you came.

Samuel Cole, a sophomore on Western Oregon University’s track and field team, knows that to be true.

After spending a year at Clackamas Community College, he came back to Independence, where he was born and raised, to attend classes at WOU and compete as a shot putter and hammer-thrower.

“I chose Clackamas Community College because I wanted to see what it would be like to get out of town, but something brought me back,” Cole said, smiling.

Cole competed in the indoor season and is now a few weeks into the outdoor season.

“In (indoor) this year, we did shot and a weight, it’s like 35 pounds, very similar to the hammer, but it’s how we throw it indoors,” Cole said.

He said he was surprised by how his first indoor season with the Wolves went.

“It went a lot better than expected,” he said.

His indoor season bests include throwing the weight 52-10 at the SPU Final Qualifier, and 45-7 3/4s in the shot put in the Great Northwest Athletic Conference Championship, nabbing a 13-place finish.

The outdoor season began March 2, and he said he’s excited about it.

“I love it. It’s definitely a different atmosphere than indoor. I love being outside. A lot of people don’t like being outside when it rains, but that’s my favorite time to throw, makes the ring a little slick, and it’s a lot faster.”

One of the meets he’s looking forward to the most is on April 19-20, in Torrance, Calif.

“I threw there many years ago at Junior Olympic Nationals when I was nine, so it will be kind of cool to get back there,” Cole said.

So far this season, Cole took first place in the hammer in the Willamette Opener on March 2, throwing 162-3, and took sixth in the shot put at the Lewis & Clark Spring Break Opener, hurling a 45-1. On March 23, Cole nabbed a season best in the shot put with a 47-0 3/4.

Track and field, and sports in general, have been in the Cole family for awhile. All of his siblings are involved in sports in one way or another, including his younger sister Emily Cole, who pitches for the CHS Panthers, and his older sister Sara, who is one of the assistant coaches for the Panthers track and field team.

“My dad threw hammer in college,” Cole said, “and my big sister (Sara) went to University of Oregon and threw hammer, and I loved it from early on seeing everyone else do it.”

This article is published by the Polk County Itemizer-Observer and written by Jennifer Biberston.