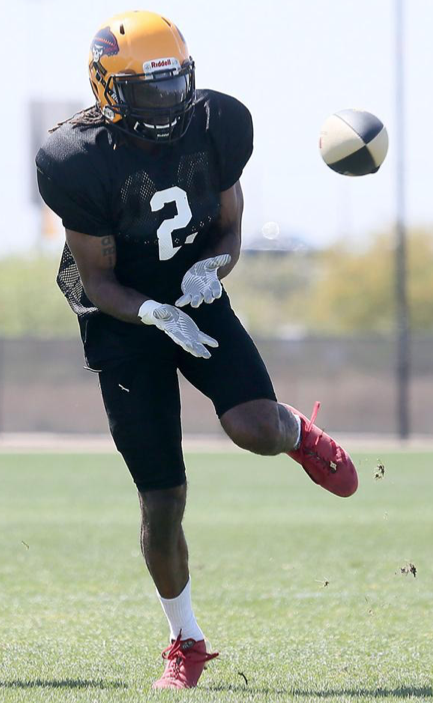 Roster turnover happens often in any nonmajor professional sport. One week a player could be the best for a franchise and by the following week, they can find a new opportunity in a different league.

It’s “the nature of the business” as Sugar Skulls coach Marcus Coleman puts it.

When the Sugar Skulls (3-2) host the in-state rival Arizona Rattlers (5-0) on Sunday, Tucson will be without All-IFL defensive lineman Keith Jones Jr., who left the team to look for a roster spot in the Arena Football League, which only features six teams but is managed by high-profile owners.

It’s not just the Sugar Skulls, either. The Rattlers have also been hit with the roster turnover bug nearly halfway through the season. Tucson’s defense will line up against an offense that features six new starters from the previous matchup between the two teams nearly a month ago.

“It’s the most turnover I’ve ever had on one side of the ball,” said Rattlers coach Kevin Guy.

Tucson hasn’t had significant turnover similar to the Rattlers, but the Sugar Skulls have dealt with a slew of injuries as well, specifically at wide receiver, defensive line and in the secondary. With injuries, depth issues snowball on Tucson’s 26-man game day roster.

Defensive linemen Shakore Philip and Michael Kluge have both battled injuries, while cornerback Dee Maggitt Jr., dealt with an ankle injury at the start of season. Kluge, an addition from the Rattlers before the season, was using crutches during Tucson’s practice on Wednesday. On offense, starting receiver Donovan Rasberry left the team this week for unspecified reasons.

So Coleman called in reinforcements.

“He’s got a good football mind and a really high football IQ,” Coleman said of Harrison. “And the thing I like about him is that he’s physical.”

The Oakland, California, native was raised to be a football player. He is a cousin of former Seattle Seahawks and Raiders running back Marshawn Lynch, and is close friends with Los Angeles Rams defensive back Marcus Peters.

Harrison combed through memories in his head of growing up with Lynch around. “We got too many stories with each other. That’s my son, though,” Harrison said.

“We’re in a whole different world. Once you come out there, we’re going to hit you in the head with something you don’t even know and you’ll be there like ‘What are you talking about?’ When you get out there, you’re going to have to link up with someone you know or else you’ll be lost like a star in space.”

Harrison wears Oakland on his sleeve and took part in developing the “Family First” foundation, an organization founded 11 years ago by Oakland athletes that helps the self-esteem of underprivileged youth. Family First hosts community events for children and young adults to seek help and receive advice from Oakland natives that dealt with similar struggles.

“Hard times don’t last, but tough people do,” Harrison said. “Every day you see the same things. People selling drugs, people dying, people that are doing things they aren’t supposed to be doing. That’s not out of the norm. Once you break that cycle and show the community that there is something bigger out there and you can have an impact in this world, people will change their mentality. That’s what we try to provide. If I can do it, then you can do it.”

Before Harrison finished high school, his family moved to Tracy, California, and the defensive back wasn’t highly recruited. So he took the junior college route before transferring to Oregon. Harrison was in Eugene from 2013-14 and was a grayshirt in 2014 when the Ducks beat the Arizona Wildcats in the Pac-12 title game en route to the national championship game. He transferred to Western Oregon in 2015 and graduated in January 2018.

Harrison attempted to play for the Arkansas Twisters of the National Gridiron League, but once the league folded, he “focused on life” and become a behavior therapist for Oakland youth.

“Then I talked with my family and my agent and they said, ‘You got to keep the dream alive. You still have some juice. You’re still young and you only get one time to do it.’ Once I heard that, that was all I needed to hear,” Harrison said. “Once that happened, I reached out to my resources and Coach Coleman was one of them and he gave me the opportunity. … Once the opportunity was there, I grasped it with both hands and ran away with it.”

Canty and Henderson weren’t in the same boat as Harrison.

Canty, a 6-3 receiver from Riverdale, Georgia, a town just outside Atlanta, has focused on his studies since he last played at Vanderbilt in 2015.

Canty was a graduate student at Florida Atlantic and worked as a pharmaceutical sales representative when the Sugar Skulls called. By April 3, he was in Tucson helping the team prepare for its road trip to Nebraska.

“I got the call and let my job know and they encouraged me to take the job (with the Sugar Skulls) as well,” Canty said. “From there, I packed my stuff and left.”

Days later, he was installed into the offense and caught his first professional touchdown.

“It was my first game in full pads in quite a while, but it’s football,” he said. “It’s an offense where everyone can get the ball.”

Henderson, a Las Vegas native, didn’t have the luxury of playing at a Power Five program in college and finished his career at Weber State, where he won a Big Sky Conference championship. The last time Henderson was in Arizona was when Weber State played at NAU last season.

The 6-1, 290-pound defensive tackle was released by the Salina Liberty of the Champions Indoor Football league earlier this year. He’s still getting used to the culture and dimensions of the field with the Sugar Skulls.

“At the end of the day, it’s still football and as a professional athlete, you have to be able to adapt,” Henderson said.

The new guys will have to adapt quickly if the Sugar Skulls want a chance at revenge against the Rattlers on Sunday at Tucson Arena.

This article is published by Eastern Progress and written by Justin Spears Arizona Daily Star.