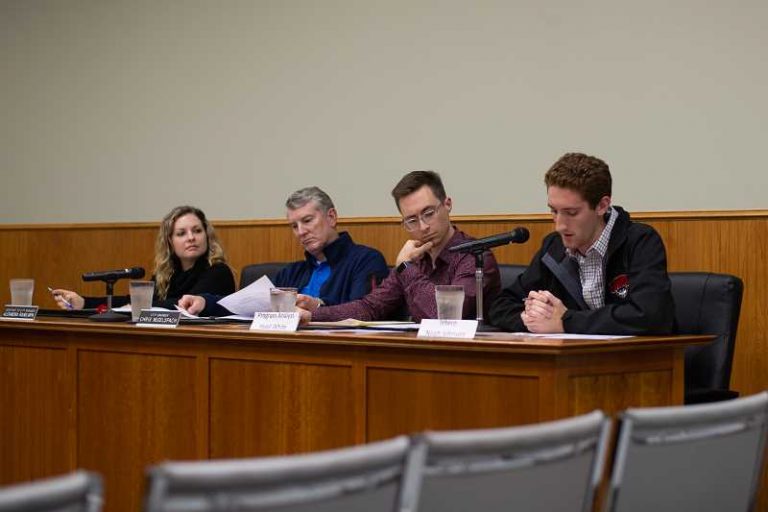 By Anna Del Savio, published in the Columbia County Spotlight

During a period of rapid growth, including residential and industrial, team of new city interns sets a productive pace.

Now assistant to City Manager Michael Sykes, Alexandra Rains started working for the City of Scappoose as an intern in 2015.

Rains was working toward her master’s degree in public administration at Portland State University when a professor in the department heard Sykes needed an intern. Rains interviewed and started interning part-time in September 2015.

The next year, Rains graduated with a specialization in local government administration and her internship in Scappoose turned into a full-time position as a program analyst.

Before graduating, students in Rains’ program outlined the positions they hoped to hold throughout the first decade after graduating. Right now, Rains said, she’s right on track.

In a larger city, similar internships are generally focused on a particular department.

“Working in a smaller community, you get a chance to do a lot more,” Rains said.

“I hope you guys look at how young this team is,” Sykes said at the City Council’s last meeting.

“You’re only as good as the team you have,” he added. “We’ve been really lucky to have good interns and then good employees who are really excited about our community.”

Those interns “take a big part in helping us keep up with this crazy amount of growth that I don’t think any of us expected,” Sykes said.

Rains now serves on an advisory committee for the PSU program that she graduated from, which led to the city finding another intern last year: Huell White.

White, who is working toward his master’s in public administration, started as an intern with a one-year term.

“Things just really worked out and we asked him if he wanted to stay on another year,” Rains said.

White has been a key city staffer on the proposed fuel tax and sidewalk program, which will appear on the ballot next month. That ballot measure would create a three-cent-per-gallon tax on fuel sold within city limits. The revenue would fund improvements to Scappoose’s sidewalks.

White is also currently working with Sykes on an informational brochure about the city, among other projects.

More recently, the city welcomed a local summer intern. Noah Johnson graduated from Scappoose High School in 2017 and is currently an undergraduate student at Western Oregon University. Earlier this year, he approached city staff and secured an internship.

Before returning to school, Johnson led an ordinance change for the city, which amended city code to allow city officials greater enforcement capability when construction crews close a road without the necessary permissions.