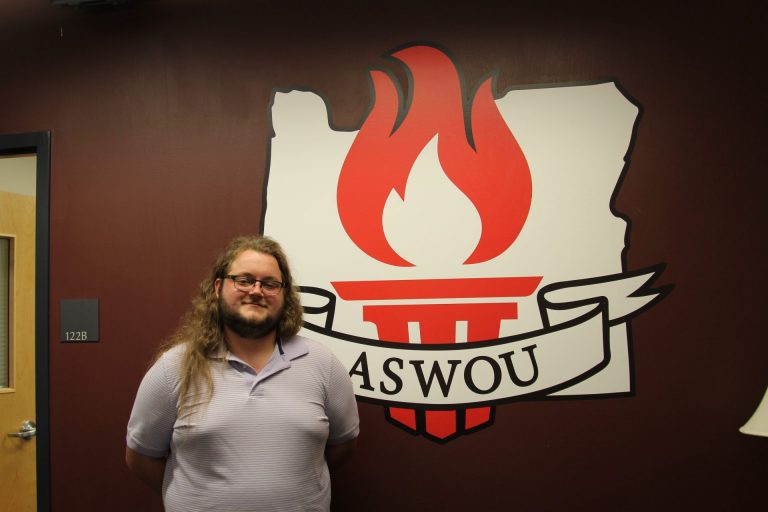 A third-generation student, Erik Morgan Jr. can pinpoint the events that propelled him from being “only partly politically aware” to being elected Associated Students of Western Oregon (ASWOU) president.

At Stayton High School, Morgan Jr. played soccer and acted in school plays. Student government wasn’t on his radar. Not knowing what he wanted to study in college, he attended Chemeketa Community College, a turning point in his life where he took his first philosophy class. He also met students who shared their stories of struggling to pay for college and everyday expenses, making him realize not everyone grew up with the same advantages he had.

Following in the footsteps of his parents and grandparents, he did what he could to help.

“My family taught me the importance of advocating for others,” he said, adding he has fond memories of his grandparents and parents volunteering at the local food bank and community dinners.

Enamored by his philosophy studies, it changed his outlook on life and how he thought about life.

When it came time to transfer to a four-year university, he looked at philosophy program throughout Oregon and Western Oregon “hit all his check marks.”

Morgan Jr. is proud of his family’s achievements at Western Oregon.

“My maternal grandparents who have been married for 50 years were the first to attend here in 1967, then my mom and some uncles and my cousins,” he said. “My grandfather played baseball and three of my uncles played on the football team and one of my cousins on the women’s soccer team. My mom was the editor of the school newspaper. They earned teaching and criminal justice degrees and I have four family members who are high school teachers.”

It wasn’t his intent to become involved with ASWOU. Instead, it happened by chance.

While walking to class in the winter of 2017, he ran into a fellow Stayton High graduate who invited him to attend a Unidos Club meeting, a support system for anyone who identifies as undocumented and/or are DACA recipients.

“I could see how much the club made a difference for the students and I was really motivated by the good work the club was doing,” he said. “I became a member of the executive board.”

His next leadership role was serving on the ASWOU judicial board, then vice president and now president.

“I want our student government to be student focused once again,” he said.

He also wants to empower students to learn how they can advocate for themselves and has encouraged students to speak before the Oregon State Legislature.

“As ASWOU president, there are very few things that I enjoy more than seeing students take responsibility for themselves and really engage politically,” he shared. “I believe our vote does matter especially at the local and state level.”

He worked with fellow students to advocate for the lowest tuition rate increase for state schools, and he organized and led a Defeat Hate march in response to hate speech graffiti found in Monmouth.

His vision for the 2019-20 ASWOU is to be fiscally responsible at all times, and for students to clearly see how their students’ fees are being used. As president, he wants to make sure his executive cabinet understands the vision.

“We can have respectful disagreements about how to enact that vision,” he said, adding he welcomes input from all students.

“Erik cares deeply about making sure that students’ rights are continuously being advocated for on a local, national and federal level,” Knox said. “He’s a hard worker and cares so deeply for this school and its student body that it’s impossible to not feel excited just being around him.”

A professor of philosophy and religious studies, Ryan Hickerson said from the moment he met Morgan Jr. that he was “unusually engaged” with tutoring, community service and ASWOU.

Hickerson said Morgan Jr. likes the conceptual problem-solving of philosophy, but he is particularly attuned to the practical problems facing other people, and especially the problems facing WOU students.

“I am seriously impressed by the way that he prioritizes the issues faced by WOU students, even when they come from a background quite different from Erik’s own,” Hickerson said. “Understanding the problems of others as one’s own is, I think, the source of all leadership.”

It reads, “I believe we all seek a place where all people can act, live, love, and think whatever they choose without fear: providing this safe place is our shared priority—our shared mission.”

“Those words really struck me because that’s the purpose of all government,” Morgan Jr. said. “Government on all levels is here to allow citizens to have a place where they feel safe and where they are allowed to prosper.”

And by taking this approach to student government, he believes he is helping every student discover their own legacy at Western Oregon.