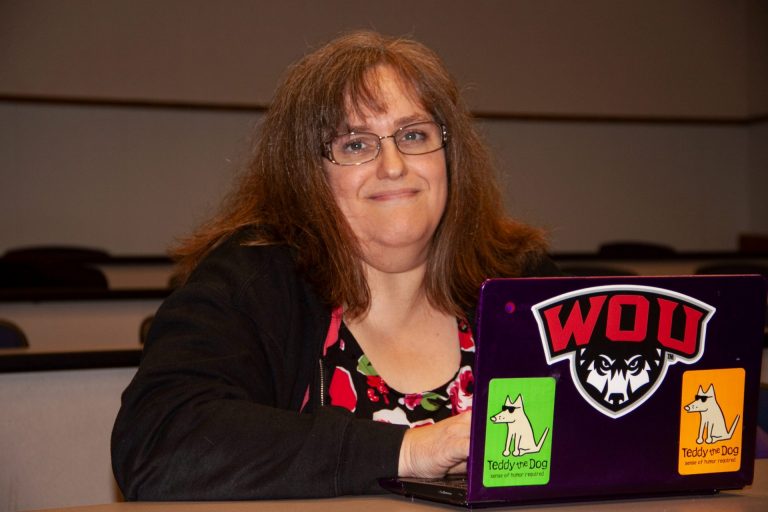 As the father of three children, Matt Wick, 29, wanted the quickest route to earn a degree that would allow him to “work with his brain instead of his back.”

He was surprised to discover that pathway would lead him to Western Oregon University.

Wick had worked in construction and owned a small business for several years. After researching that computer science and information systems were growing industries, he decided pursue something in the realm of computer science.

He enrolled at Chemeketa Community College for the second time with the goal of earning an associate’s degree and then finding a job. Instead, he learned he could earn his bachelor’s degree from WOU in about the same time it would take to earn his associate’s degree.

Wick said the credits he earned the first time he attended Chemeketa in 2010 could be transferred to WOU.

“If it weren’t for Western Oregon’s transfer pathway for computer science and information systems majors, I would have stopped at earning an associate’s degree,” he said.

Wick is grateful for his mentor Don Kraus’ guidance throughout the transfer process. Kraus is an instructor and adviser of computer science and information systems at Chemeketa Community College and Western Oregon University.

“Kraus genuinely cares for his students and does everything in his power to help them succeed,” Wick said.

Wick is just one of the many success stories linked to Kraus and Tad Shannon, a professor in the Computer Science Division. Along with Ted Beers, they worked on the curriculum to make the smooth transition for students to transfer their credits from a community college to WOU, where they can continue in information systems.

“We have created pathways to assist students to earn a four-year degree from an AAS degree,” Kraus said. “It doesn’t matter where you started. We want Western Oregon to be where students finish their computer science and information systems degrees.”

This fall, Western started offering a cybersecurity concentration within the information systems major with the first group set to graduate in June of 2020.

Wick is excited about his future, especially because cybersecurity is a growing industry.

“I think it’s an important skill that will help me with finding a well-paying job as well as a broad spectrum of industry opportunities,” Wick said.

Gathering courage to start over

Tricia Holman, 47, remembers she was 10 years old when she first began playing with computers.

“I liked to figure out how things worked and liked looking behind the scenes and seeing what different things did,” Holman said.

Holman said her colleagues would ask her to solve their computer issues at her various workplaces.

She considered returning to college many times but decided against it because of her age. The combination of several life events and career starts and stops prompted Holman to return to Chemeketa in 2015 where she met Kraus.

“Don told me that he recognized my potential and I needed to go to Western to earn my applied baccalaureate,” she said, adding she is set to graduate in June 2020.

Holmes is interested in a career where she can use her web development and programming skills. The median annual wage for computer and information technology occupations was $86,320 in May 2018.

Both Holmes and Wick encourage anyone who is considering a career in computer science or information systems to learn about Western’s programs.

“What I appreciate about WOU is the supportive environment,” Holman said. “I know all my professors, and I can meet them or send an email if I have questions and they always answer.”

Wick said Western has all the resources to help students succeed.

“I’m not traditionally a techy or coder type, but I hope to be proof that there is hope for retraining adults in the complexities of computer science and information systems,” Wick said.