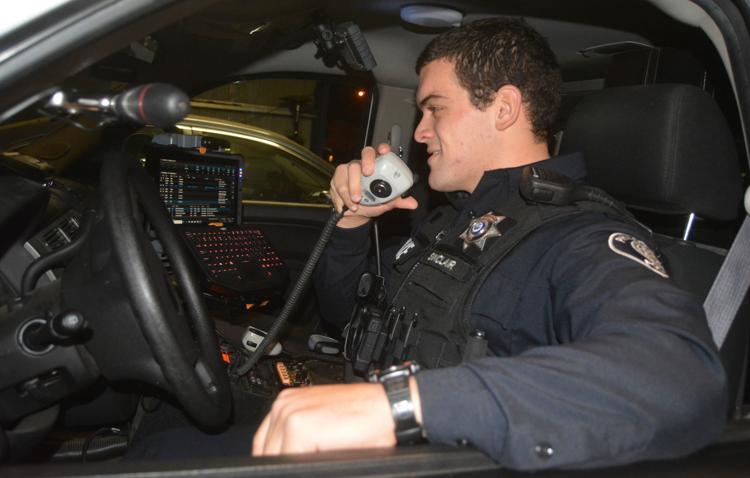 By Brad Fuqua; published in the Philomath Express

Patrolling Philomath’s streets and responding to calls overnight on graveyard shifts, 23-year-old rookie police officer Lucas Sinclair has a high degree of familiarity with the lay of the land. A little more than five years earlier, Sinclair had received his Philomath High School diploma to embark on new adventures.

The path led him right back to Philomath. And that’s not a bad thing.

“It’s awesome; I feel super fortunate to have gotten the opportunity to give back to a community that basically raised me,” said Sinclair, who graduated from the state’s police academy this past summer and is now a couple of months into the job. “I started out in Blodgett but from the fifth grade on, I was in Philomath so I feel fortunate to give back in a professional capacity and serve my community.”

For a fresh-out-of-the-academy officer like Sinclair, he’s eager to soak up the experience and knowledge that he has around him with the Philomath Police Department.

“Just working under a guy like Chief (Ken) Rueben with that much experience is great and with Sgt. (Dave) Gurski, I’m just working with a stellar team that they have here,” he said.

Sinclair grew up in Summit — although he usually tells people Blodgett because that’s more familiar to others — with his parents and a twin brother, older brother and older sister. Nobody in the family has a background in law enforcement, so what sparked his interest? It came down to his senior year at Philomath High School.

“We had to do a senior project and I didn’t know what I wanted to do after high school,” Sinclair said. “Mr. (Scott) Ballard, who was the shop teacher at the time in Philomath, had the idea of doing a career exploration kind of thing for my project.”

“I shadowed a machinist, I shadowed someone at a mill and then I went on ride-alongs with the Benton County Sheriff’s Office and the Corvallis Police Department,” Sinclair said. “Ever since I did ride-alongs with them, I just sort of fell in love with it and I could picture myself doing something like that in the future. That’s where it all started.”

Sinclair attended Blodgett Elementary through the fourth grade and then finished up in Philomath, graduating with the class of 2014. With the ride-along experiences, he began looking for a college to continue his education in the direction of law enforcement.

“I decided to pursue a degree at Western Oregon because they were the closest school that had criminal justice,” said Sinclair, who earned a bachelor’s degree in 2018.

Sinclair entered the Oregon Department of Public Safety Standards and Training basic police class in Salem back on April 15 and graduated with his class on Aug. 9.

“Most of it was fun — the driving, the shooting, even just the classroom bonding with everybody,” he said. “The academics weren’t too tricky.”

Sinclair had grown up around firearms, although he had limited experience with a handgun. The toughest part at the academy came down to the various scenarios that instructors would throw at the candidates.

“Some were pretty challenging and made you think, especially because I have the school experience (at Western Oregon) but I didn’t have any reserve experience or any time with anybody (in law enforcement) before I went up there,” Sinclair said.

In other words, the majority of police academy cadets have a background as a reserve officer.

“My roommate was a reserve for like four years, so he was kinda used to that stuff,” Sinclair said.

But he got through it all and is now working through his current training phase. Sinclair can’t go solo just yet — his readiness for that will be determined by his training officer. Having a familiarity with Philomath has helped.

“It does help me, although there’s definitely some spots in Philomath where I never went when I was here, so there are areas that I’m still trying to familiarize myself with, like on the outskirts of town,” Sinclair said. “But in general, I know where a lot of the stuff is and it was probably easier for me to get adjusted to the geography than someone who came in from out of town, for example. So that has helped.”

Sinclair would actually like to call his office the outdoors later in his career.

“Ultimately, I want to end up working with Fish and Wildlife someday,” he said. “That’s kind of my end goal. Obviously, I was super grateful to get on here with Philomath. I just couldn’t be happier.”

Sinclair’s high comfort level in the outdoors comes from his past experiences.

“Most of my time spent off duty, the vast majority of it, is fishing and hunting,” Sinclair said. “I love the outdoors — fishing, camping, hunting, anything to do with the outdoors.”

For now, he’s enjoying learning on the job in Philomath.

“It’s been fun. I’m only two months out of the academy, but I’m learning something new every day,” he said.“The training I’ve been doing has been really good.”