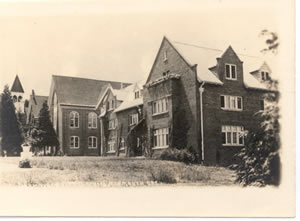 Todd Hall rests at Western Oregon University, built as the first dorm in 1912 and was named in honor of Jessica Todd, who was the first Dean of Women. Her legacy lingers in the building’s halls due to her well-known discipline, even after her retirement in 1931. She made sure the floors were scrubbed once a week in the rooms and every morning in the entryway, and the traditions she led, like guest dinners and family-style Sunday dinners, which carried on until the 1960’s. It’s also been said that Todd significantly helped girls with their social, familial, or financial hardships. A former dorm resident, Janice Powell, wrote in a 1960’s era book filled with memories of Todd describes how she expected girls to be “worthy representatives of teaching.”

Another former student from the late 1940’s, Margot Burridge Miller, says they were required to announce when men entered the building and where they were located, and girls would hear through the building, “man on second!” Alumni also tell stories of Todd having dates say their goodbyes outside and immediately locking doors at curfew. Although Todd passed away in 1944 from a stroke, her spirit is rumored to linger in Todd Hall. Since 1980, male visitors claim to feel uneasy, while other guests describe the peculiar feeling of being watched. Sights of thick mists in hallways, odd lights in the highest windows, and drastic temperature changes are only some of the persistent activity. Staff members have also claimed to find objects mysteriously rearranged overnight and some report hearing disembodied voices in the basement when alone.

On the night of a memorable Christmas Eve in 1997, public safety officer Keith Carlton and another dispatcher were the only employees on campus that quiet night. That evening, every sprinkler valve in the locked building had been turned on enough to set off the fire alarms and set the public safety officers into action. Carlton thoroughly investigated each empty floor, yet he found nothing and decided to review security footage. In a third-floor room, a strange light brightened and dimmed for 15 minutes. Upon seeing that, he decided not to go back to check it out, stating in a later interview that “there was nothing in that room that could glow.” The ghost of Jessica Todd is rumored to still roam both Todd Hall and The Cottage, another residence hall used in 1917. Todd Hall is now utilized as the Psychology building and Teaching Research Institute, but the legacy of Jessica Todd will echo in the building for years to come.

Want to read more? Check out this story by student Cheyan Swan, which includes an interview with Dean about this project.