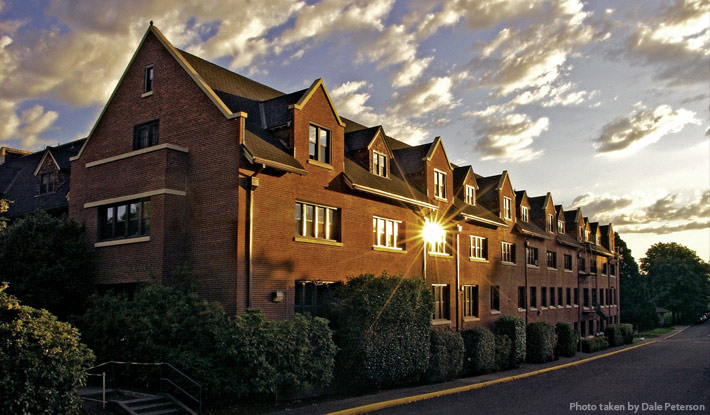 During October, there is an abundance of ghostly, paranormal, and spiritual content to consume. The afterlife and the make-believe take center stage during America’s preparation for the frightful and fun-filled night of All Hallows’ Eve. Humans have displayed an interest in the afterlife since the early days of society, ranging from the lore-based traditions of the ancient Egyptians to the strict religious practices of Catholics, Muslims, Jews, and other such affiliations. Death is one of the guaranteed aspects of life, yet we constantly pose the question of whether death is truly final. This quest drives our fascination for the paranormal, seeking ghostly encounters and signs from the great beyond.

Here on the WOU campus, we have our own infamous, historical haunt⁠—Todd Hall. Named after the late Jessica Todd, who was the dean of women in the university’s past, this campus site is surrounded by myth and speculation. Although its history has sparked interest from many students, one in particular—Natalie Dean⁠—began a thorough research journey of her own for the sake of contributing to the “History and Mystery in Monmouth” project, which took place early this month.

Natalie dug into the library databases, seeking out old newspaper clippings and other relative accounts of history about Todd Hall and The Cottage. She said she was inspired when, “I discovered the legacy that Jessica Todd left/Todd Hall’s overall history.” She also searched online for personal stories from WOU faculty and students. “The entire research and writing process took a bit under a month, I spent a little under two weeks doing thorough research and another week or so to write,” Natalie recounted. “I covered multiple stories, and most of my sources came from Scott McArthur’s book ‘Monmouth, Oregon: The Saga of a Small American Town.’”

Natalie’s writing isn’t typically centered in the supernatural. Rather, “My writing primarily falls under memoir and poetry, although I do have some poems that cover supernatural events/elements.” Despite that, she said she had quite a good time looking into local history, and she has found that she would enjoy delving into similar subjects in the future, as well.

Intermixed with the ghostly tales were generally funny and entertaining tidbits about Todd Hall’s namesake. Natalie shared a few of her favorites. “I found that Jessica Todd used to shut and lock the front doors right when curfew hit, as well as when young women were saying goodnight to their dates so they knew not to be late,” she stated, sharing a piece that relayed the stricter part of Jessica’s personality. “It was also required that any time there was a man in the building, ladies would have to yell out their location, such as ‘man on second!’ These tidbits were funny and sweet to me, since they showcase what a caring and attentive woman Jessica Todd was, and what life was like for students then.”

Among the facts and stories Natalie heard during her process, one particular story stood out to her. “[It] came from the paranormal group that investigated the attic of Todd Hall. The investigator had a real skeptic in his group, that is until he turned on an electronic voice phenomenon (EVP), and it said the name of the skeptic student, then the name of her twin sister who wasn’t even there, and then the word ‘twin.’ After the student heard that, she apparently left the tour and refused to go back inside. I’m a firm paranormal believer, and even that story freaked me out.” The attic is where Jessica Todd’s office was located, and it seems to be one of the most haunted portions of the building⁠—perhaps Jessica’s spirit still occupies her office today.

Of course, given the overall topic of conversation, I had to ask Natalie about any other paranormal experiences she may have had in her own life. It is, after all, the season of the undead. Natalie had a childhood story to offer: “The first [experience] I had happened when I was five after my grandmother passed away, and I totally believe that I saw her at her own funeral. I believe she appeared as a little girl, and when I brought it up to my dad, he said I was supposed to be the only little girl there. To me, that cemented in my mind that it was my grandmother not saying goodbye, but as a ‘see you later.’”

No matter our reason for seeking out supposed remnants of the past, spiritual activity is undoubtedly a fascinating topic. Skeptic or not, there’s no harm in wondering what parts of us⁠—if any⁠—may be left behind after our bodies have passed. There is a certain comfort in entertaining that part of the unknown.

If you’re looking to hear more from Natalie Dean, you can find her input in an article from the Polk County Itemizer-Observer, or check out her article published through WOUstories.