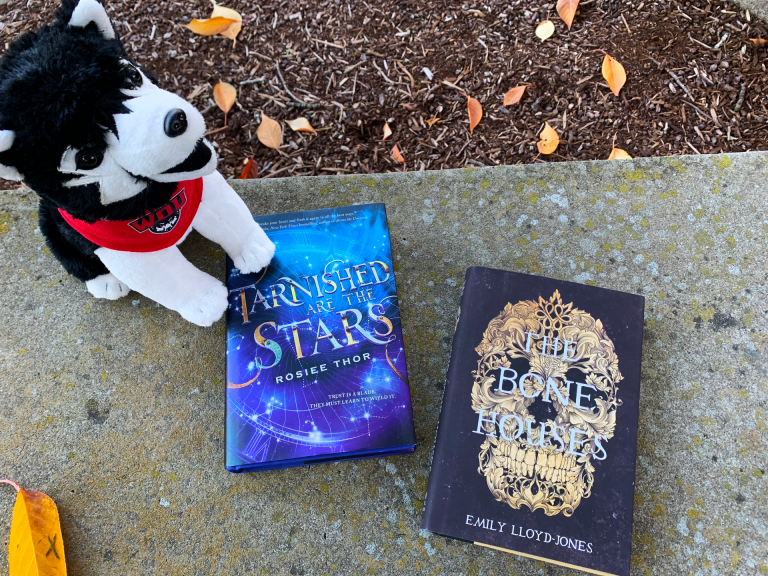 A 17-year-old gravedigger and three futuristic teens can trace their stories’ beginnings to their authors’ experiences at Western Oregon University.

The gravedigger protagonist belongs to the imagination of Emily Lloyd-Jones ’10, and the space-age tech and steampunk-style clockwork teens to Rosiee Thor ’14. Both authors released young adult novels this fall.

Lloyd-Jones’ fourth novel, The Bone Houses, is about a gravedigger with a sidekick undead goat in medieval Wales who wants to end a curse that causes zombies to interfere with her job. Thor’s debut novel, Tarnished Are the Stars, is about three queer teens from different social classes who must work together to save their new planet from a deadly epidemic.

In celebration of National Author’s Day on Nov. 1 and National Novel Writing Month or NaNoWriMo from Nov. 1 to Nov. 30, Lloyd-Jones and Thor shared their stories on how WOU provided a foundation for their careers as published young adult novelists.

Thor will sign her book 11 a.m. to 1 p.m. Saturday, Nov. 2 at the Reader’s Guide, 735 Edgewater St. NW in Salem. She will be joined by young adult authors Kate Ristau, who taught at WOU and is the author of Shadow Girl, and Deb Logan, author of Faery books.

Explaining Thor is her pen name and her WOU records are under her given name, Thor wrote the first draft of Tarnished are the Stars during her senior year at WOU. “That first draft had no heart and soul,” Thor said. “But as I revised it 10 times over the course of the next five years, I got more inspired with each draft, finding new threads and themes that got me excited about the story each time I went back to it.”

Thor said WOU’s Writing Center was a valuable resource where she learned to appreciate peer critique. “Even more importantly, I learned to cultivate a revision mind-set. Without that, I might never have returned to this novel as many times as I needed to in order to make it what it is today,” she explained.

The best advice Thor received as a writer at WOU was to major or minor in something other than writing or language arts. “I was told more than writing instruction, I needed something to write about,” Thor said. “Storytelling is a lot more than knowing where to put the comma. It’s about having something valuable to say and knowing how to say it.”

At WOU, Lloyd-Jones learned most authors are essentially small business owners responsible for managing their brand, websites and social media. “The most helpful classes I took weren’t actually related to writing fiction, but to the business aspect of being a writer. I took classes on public relations, business writing and marketing, and those classes have been invaluable,” she said.

Lloyd-Jones, 32, said she loves writing for writing for teens because they are unabashedly enthusiastic readers and if they love something, they will champion it hard.

“To be a young adult is to live through a time of transition. It’s that not-quite-adult and not-quite-a-kid time period,” Lloyd-Jones said. “It’s chaotic and frightening and full of possibility, and I find a lot of inspiration in characters that are still figuring themselves out.”

Both adult and teen readers like young adult novels because the themes of self-discovery and self-determination are universal, Lloyd-Jone said.

As a teenager, Thor, 27, read adult science fiction and fantasy novels because she found the young adult section in libraries and bookstores to be “pretty meager.”

When she started writing her novel at WOU, the young adult novel market had exploded with hundreds of sci-fi, fantasy and paranormal stories that “swept her off her feet.”

“What I’d lacked in high school became readily available a few years later, and I devoured those books. I think my choice to write young adult really speaks to the empty shelves I experienced as a teen,” Thor said. “I wanted to create what teen me didn’t have, what teen me would have wanted, and what I know now that teen me needed back then.” 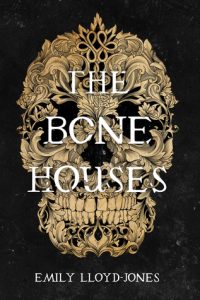 Two things happened on one night to provide Lloyd-Jones with the inspiration to write The Bone Houses. She read an article where historians put forth the theory that people in medieval times were dismembering the dead so they wouldn’t rise again.

“Of course, my first thought was medieval zombies would be a cool book idea,” she said.

Shortly afterward, she received a phone call that her last living grandparent was in hospice. “I loved her very much, and I ended up spending the rest of the evening thinking about what it’s like when family members leave us,” Lloyd-Jones said. “Somehow, the zombie idea and my own personal news ended up merging in my brain and I ended up with a story about medieval zombies that deals heavily with themes of family loss.”

Lloyd-Jones and Thor encourage aspiring writers to always be writing and learning and to find people who will encourage them on their journey. The road to becoming a published author is long and slow.

“Practice patience,” Thor said. “Learn to be at peace with waiting and utilize the time you spend waiting to create more stories.”

Lloyd-Jones said practice is the most important aspect of becoming an author. “Experiment with genres, with narrative voice, with prompts, with plot. Learn the rules and how to break them. And learn which rules shouldn’t be broken,” she advised.

Thor said writing itself can be a lonely endeavor so “finding people to commiserate with or swap writing tips with is key.” She and her housemate co-run the Corv 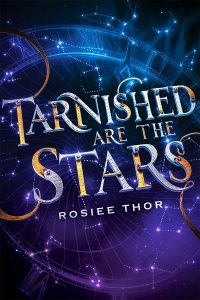 “My housemate is someone I met at a NaNoWriMo event. Making connections in person is amazing, but online is valuable too,” she said. “The NaNoWriMo forums are a great place to meet people, and the writing/author community is alive and kicking over on Twitter as well.”

Although Lloyd-Jones and Thor didn’t cross paths at WOU, they did become friends while attending a writing retreat organized by a mutual friend. Thor lives in Oregon while Lloyd-Jones resides in California.

“We spent five days hanging out, writing, and eating Tillamook cheese–and really, what better form of bonding is there than a mutual love of cheese,” Thor asked.

Perhaps that’s a question to be answered in an upcoming young adult novel by either Thor or Lloyd-Jones.