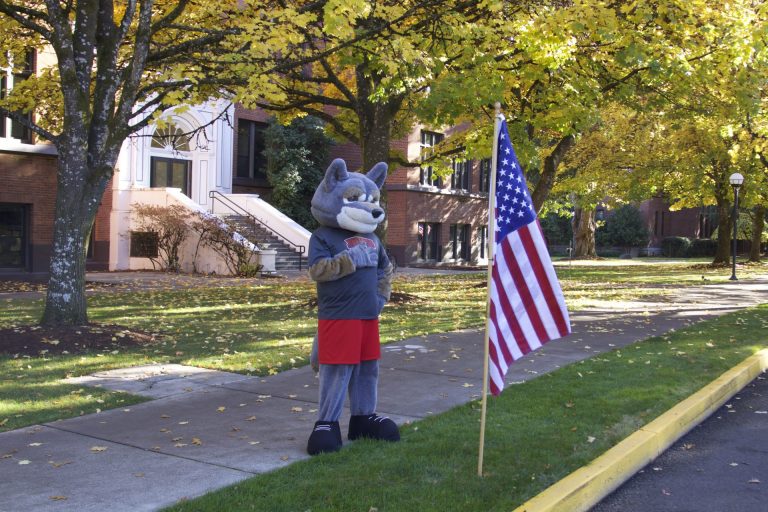 Colin Haines is now a different kind of warrior.

“When I was in the military, I was taking care of some blatantly obvious physical wounds,” Haines, 35, said. “Now, I am caring for the invisible wounds.”

The director of Western Oregon University’s Veterans Resource Center (VRC), Haines served 10 years as a U.S. Army airborne medic, and was deployed on five combat tours –two in Afghanistan and three in Iraq.

Injured during his last tour, he was departed the military to pursue his education back home in Oregon, where he earned his bachelor’s degree at Concordia University in 2016 and his master’s degree at Western Oregon in 2019.

As an undergraduate, Haines said he didn’t have access to student-veteran support services like he did as a graduate student at Western Oregon.

“As an undergrad, there was someone in the register’s office who processed my paperwork and must have done it well because my bachelor’s degree was paid for, but I never saw that person,” he said, adding that there weren’t opportunities or places for student-veterans to meet or receive assistance from a college staff member.

Veterans generally fall into one of two categories as college students, Haines explained. There are the student veterans who keep their heads down, do their work, and don’t interact with other students or participate in campus activities. The other type of student veteran is one that has a challenging time transitioning from the military to civilian life.

Although he was doing well academically as an undergrad, he struggled socially and experienced anxiety. He had trouble speaking and finishing sentences. It was not until he saw a speech pathologist that he received the diagnosis and treatment that he needed. Haines noted that his condition was one that other veterans would have easily picked up on if he were interacting with them on a daily basis.

“My experience transitioning out of the military and having my own pitfalls is invaluable in this job,” he said, adding it is his goal to make the center a place where everyone feels welcome and supported. “I’m no smarter or better that any of the student veterans in school right now, I’ve simply been in their shoes and learned my own failures and successes.”

Located in the Werner University Center, the VRC is a place for veterans to study, use the computers and printers, relax, watch TV or play video games, and most importantly connect with fellow veterans.

Haines works with student veterans and dependents to assist them in navigating G.I. Bill education benefits, veteran-veteran mentorships and work study programs. He also advocates for student-veterans on campus and at the Oregon State Legislature.

A Marine Corps veteran, Sutherby ‘19 is a work study student in the VRC. He will begin his master’s degree next fall.

Anxious to start college after living in a small town in Washington and serving in the military, Sutherby said he began visiting the center in 2016 to study. He soon met friends.

“The center is a safe, comfortable and friendly place,” he said. “Colin takes his job seriously and wants to help students succeed. He is always there to help anyone who asks.”

Including himself, he said laughing.

When he asked Haines if he could lend a hand coaching his son along with 5 to 7-year old football players, Sutherby said he already knew what Haines’ answer would be.

For Haines, it’s just second-nature to lend a hand.

“Jake needed some help and I was in the position to help,” Haines said. “If someone needs help it’s not OK not to help.”

As much as he admits to having his own issues, Haines said he left the military with a clean slate and equipped for the academic realm.

“There are so many vets who need support to make the transition to college life,” he said. “For me, it’s one of those things where if it’s not me, then who? Based on my track record, I am in a good position to advise and assist. It’s my primary goal to help people.”

Events to honor Veterans Day this week (all listed are open to the public):

Monday: There’s a student veteran panel at noon in the WUC Willamette Room. In this panel, student veterans will speak to their experience in the military and in academia.

Wednesday: They will be outside the Wolfstore in the WUC from 10am to 2pm handing out stickers to anyone who attempts the 22 Pushup Challenge. Twenty-two veterans leave us every day and this activity helps bring awareness to their plight.

Thursday: At noon in the WUC Summit, there will be an MREating contest; a contest to see who can eat a military MRE (meal ready to eat) the fastest.

Friday: Movie night, supported by Res Life Cinema. Hacksaw Ridge will be shown at 7pm in the Columbia Room.

More about the VRC:

Open 8am to 5pm Monday-Friday in the Werner University Center, room 108. The Student Veterans Club meets at 5:30pm every other Tuesday.

Call 503-838-9246, visit wou.edu/veterans or email hainesc@wou.edu to learn about the resources available for student-veterans and their dependents.