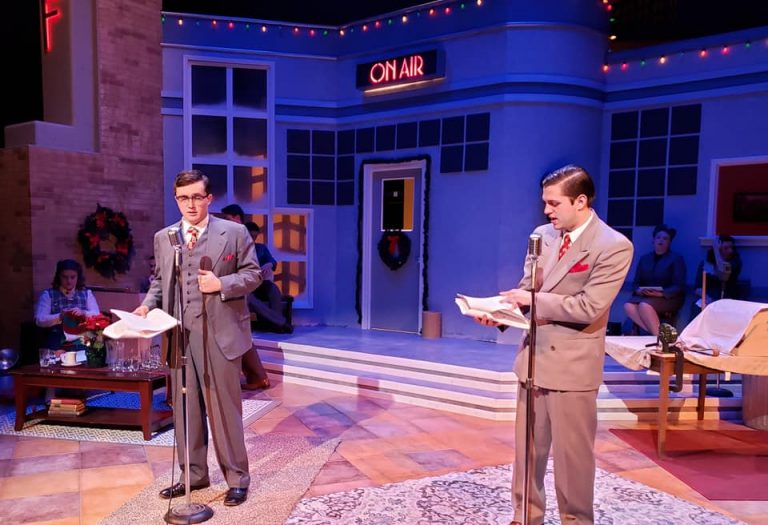 Experience the behind-the-scene escapades of a 1946 radio broadcast by attending the Western Oregon University Theatre Department’s presentation of It’s a Wonderful Life: A Live Radio Play on Nov. 14-16 and Nov. 20-23.

WOU Theatre Professor and Director Kent Neely said the live radio play is a great start to the holiday season for anyone who likes the classic film It’s a Wonderful Life, directed by Frank Capra, play adapted by Joe Landry.

“This is a play that families will enjoy,” Neely said. “Children will get a kick out of watching and hearing the sound effects, parents will identify with the challenges of having a family, and older folks will remember what America was beginning to be like after World War II. And everyone will love the story.”

WOU’s stage version of It’s a Wonderful Life: A Live Radio Play captures the charm of the WBFR studio in New York City on Christmas Eve in 1946. Relying on 10 students’ voices cast for a town’s worth of characters and “Foley” artists providing the sound effects, Neely said the play requires students to perform a different style of acting. The cast vocalizes a range of characters from crying babies and an old, cold-hearted businessman to an Italian restaurant owner and Irish police officer, and of course, the characters central to the story – Clarence, the angel seeking to earn his wings, and George and Mary Bailey.

“The actors have little physical interaction because they are depicting a performance for radio…so they speak to microphones,” Neely shared. “The emphasis is on what the audience hears. The actors have really risen to the occasion with different voices and accents.”

WOU students Lexie Warner and Bill Evans shared performing in the play has taught them how to let their voices do all the acting. Warner does the voices for five characters while Evans has seven roles. Warner said the play allows the audience to see and learn more about a live radio show, an art form of the past.

“One of the challenges of doing a radio show has been transferring the energy of a physical scene into just my voice,” Warner said. “We have to make the show engaging and understandable to the audience without presenting it visually.”

Evans plays Harry “Jazzbo” Heywood who performs the voices for Clarence, the second-class angel seeking to get his wings, to Mr. Martini, the owner of Martini’s Bar. “It has been fun finding the nuance and complexity of each character and a fun challenge to convey all of that through the voice,” he said.

Neely chose the play because he has always liked the holiday story. When he saw the film was adapted to a stage play, he thought it would be a good challenge for his students. He also treasures the story’s message.

Although Bedford Falls, New York may only exist in our imaginations, Neely said it’s the kind of small town that represents community values. The play’s main character, George Bailey, exemplifies this, even in the midst of his own personal crisis.

“George Bailey is a dreamer who wants to go places, build things and make a difference.  And that dream isn’t fulfilled but he learns that his personal integrity and love of his community in the face of crisis is a far more valuable acquisition and makes a far greater difference,” Neely said. “It’s a feel-good story about people that love one another and about a dreamer who finds out that some of the simplest accomplishments make a wonderful life,” he said.

Warner invites people to start their holiday season by seeing It’s a Wonderful Life: A Live Radio Play. “I would encourage people to see the show to get into that festive holiday state of mind,” she said.

Tickets are $14 for general admission, $10 for senior citizens and WOU employees, $8 for students with ID, and free for WOU students with ID. Tickets are available in person, by phone at 503-838-8462 or by email at boxoffice@wou.edu. You can also buy tickets online here.