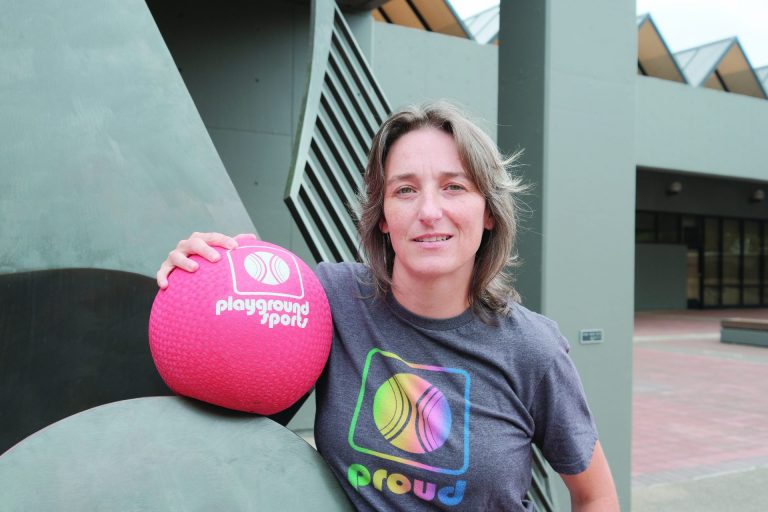 While pursuing a degree in health education with a minor in business, Bec Williams ’98 spent all
four years at Western Oregon University working at Campus Recreation. Many years later, as
owner of Eugene’s Playground Sports, which offers recreational sports leagues for adults, this
experience has served her well.
“I had a lot of skills I was able to apply to my company from what I learned at Western, from
timing the Turkey Trot and running tournaments like the Schick Classic to being creative with
programming,” she said.
In the 10 years since it opened, Playground Sports has expanded to include 14 leagues (think
kickball and dodgeball, along with more traditional sports like volleyball and basketball) as well
as athletic competitions for corporate picnics and fundraisers. And while this may sound like fun
and games, Williams is quick to point out that it’s much more than that.
“It’s social. It’s health and wellness, and I’m helping improve my community,” she said. “(And
it’s) all because I was shown what a good community was at Western.”
This notion of community was underscored when Williams started bringing games like
cornhole to tailgate at Western football. “I saw all the alums in the parking lot — younger ones,
older ones. It was great to see how Western touches people.”
So before the university’s annual Giving Day in March, she decided to give back, offering to
match $1,000 in gifts to the Stonewall Center, WOU’s LGBT*Q+ campus support center.
“I met my wife (Annette Leonard ’96) at Western, at a time when it wasn’t safe to kiss her
goodbye when I walked her to class,” she said. “I realized how far Western has come—the
world has come—especially these days when we are backsliding in some ways. The Stonewall
Center didn’t exist when I was on campus, so I want to make sure future generations have a
safe experience.”
After calling on her WOU community, Williams’ match was quickly met and surpassed.
“We are just getting started,” Williams said. “I put it out there to my friends, challenging them
to put our money where our mouth is. We took a lot, and now it’s time to return the favor. It’s not
a duty—it’s an honor to be able to give back to the school that’s given to me in so many ways.”