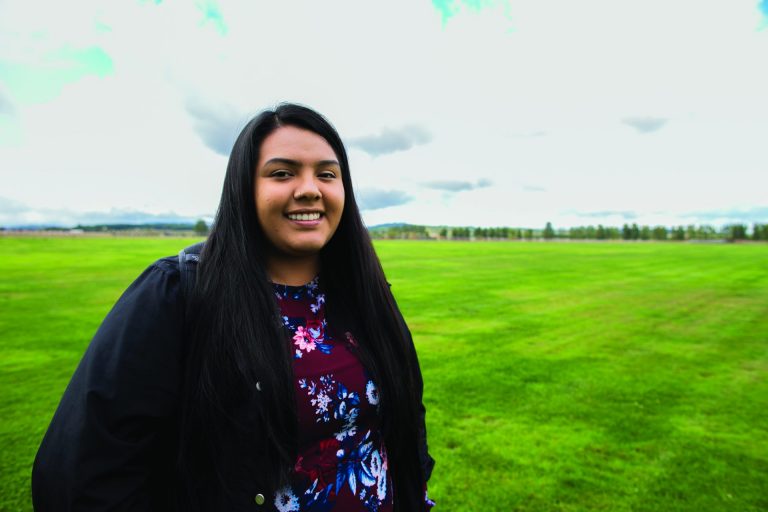 Future educator rises to all challenges

As a senior majoring in middle/high school education with a concentration in social science and
a minor in Spanish, Gabbie Acevedo-Solis’ dream job is teaching Latin American history in a
language immersion program. Given her strong work ethic and impressive grade-point average,
that goal seems well within reach.
She’s deep into student teaching this term at Waldo Middle School in Salem and this past
summer shared her feelings about her future. “I’m excited and nervous. I’m excited to get my
foot in the door with my career,” she said.
Acevedo-Solis does not hesitate in crediting her parents, who immigrated more than 20 years
ago from central Mexico, for her dedication to hard work and discipline. When she was a teen,
she went to work picking blueberries with her father.
“It was to teach me character but also to motivate me more to invest in my education and not
have to go through the struggles they went through,” she said. “Picking was the hardest thing I’d
ever done. We were up by 5:30 a.m. and in the afternoon it was so hot. I’d go home and shower
and then go right to bed.”
Her parents learned to speak English over the years and eventually earned their GEDs and
moved away from agriculture, but Acevedo-Solis still considers Spanish her first language.
Having to complete schoolwork in a second language has required a higher level of dedication
and perseverance, and she still says it takes her longer to do things than some other students.
Acevedo-Solis graduated from Central High School in Independence in 2016. She
participated in the Upward Bound program there and says the staff at every school she attended
encouraged her to study hard and seek higher education. Her outstanding grades earned her a
full-ride scholarship at University of Oregon and a sizable financial aid offer at Linfield College,
but in the end, Western Oregon University is where she fit best.
“I visited Eugene, but I didn’t see a lot of people who looked like me,” she recalled. “I didn’t
think I could connect with people there. Also, I am a big support for my family, being the oldest.
Whether it’s bills or translation or anything, I am the one to take care of it. I didn’t want to leave.”
At WOU, one of her cousins steered her toward the Student Enrichment Program (SEP),
which is a support program for first-generation students, low-income students and students with
disabilities that serves about 700 students. Acevedo-Solis had no idea what the whole thing was
about, but she applied and was accepted. The SEP proved to be a game changer for her.
“They were just like Upward Bound but in a college setting,” she said. “They helped me with
everything. SEP has given me a lot of support and advising. They know me and my
background. Now I work there as a student worker, which helps me pay for textbooks and other
things. I can help people like me who felt lost in college.”
One would never guess that she has struggled at all. She has been part of many different
offices, clubs and activities on campus and even traveled to Argentina to study abroad. She’s
organized major campus events including the annual pow wow and Nuestra Fiesta Latina and
worked in Student Engagement. She lived in the dorm her freshman year—thanks to a
scholarship—and loved it.
If you ask Acevedo-Solis, it has been the faculty and staff at WOU that have paved the way
for her success. She credits her English instructor Matt Haas with supporting her love of writing,
even if her skills weren’t initially strong. Associate Professor Carmen Cáceda gets high marks
from Acevedo-Solis for sparking her interest in bilingual education. Finally, she thanks SEP
advisers Gabriel Hernandez, Adriana Carrillo, Sheree and Chris Solario, and Marshall
Habermann-Guthrie, as well as Multicultural Student Services and Programs (MSSP) director
Anna Hernandez-Hunter, for their positive influence.

Now, Acevedo-Solis is eager to pay that support forward in her own classroom. “I just love
school. I love learning,” she said. “I’ve had a connection with every teacher that I had through
my educational experience. Often I would doubt myself, but they would reassure me that I was
smart enough and good enough to do it. I want to do the same thing for students who need that
support, not just in school but also outside. I want to be a role model for them.”
Attending WOU is now a family affair; one of her younger brothers is already a student, and
another is considering Western. “I tell people, ‘You should go to Western, and if you do go to
Western, join SEP. That’s all you need to know. Tell them I sent you,’ ” she said with a laugh. “I
also tell them to find a university that’s like home, but like a home away from home.”
As she works toward her degree, she’s also looking toward the future. She hasn’t ruled out a
master’s program as her next challenge, something she now has the confidence to consider
because of the growth she experienced at WOU.
“I’m the type of person who has a goal, and it doesn’t matter how I get there, I’m going to get
there,” she said. “I discipline myself a lot because I know that it takes work and I’m willing to do
that. I just want to be the best version of myself that I can be.”