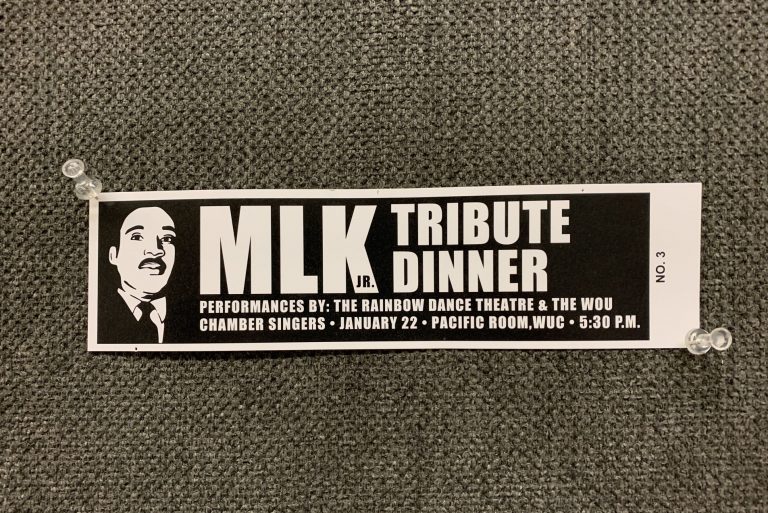 Patrick Moser, assistant vice president of Student Affairs, said the event is a reminder to ponder, “How far we have come due to MLK’s impact while reflecting on how far we still have to go.”

“This year’s celebration is special in that we have campus groups contributing to the program with performances by WOU Chambers Singers performing some of MLK Jr.’s favorite hymns and Rainbow Dance Theatre performing pieces in tribute to MLK Jr. and his contributions,” Moser said.

“This year’s essays highlighted the hope students have in their ability to impact the communities they interact with daily,” Peralta Cortez said. “Common themes in the essays were serving others with love at the center and what we gain when we help others. They were deeply personal essays as students shared the hardships and challenges they had encountered and the ways that MLK’s words still resonate with them and push them to make the world a better place.”

Associate Vice President of Student Affairs and Dean of Students, Tina Fuchs, said the event is a wonderful opportunity for the community to come together in unity to honor the civil rights leader’s work.

“It is so important to pay tribute to someone who worked so tirelessly to address the injustice many people experienced,” Fuchs said. “MLK was a trailblazer, a fighter and a person who influenced the advancement of civil rights in our country.”

Fuchs hopes guests will walk away from the event with an understanding of MLK Jr.’s impact on the world, adding he is a reminder of how one person’s work can make a difference.

“There are forces dedicated to keeping wide divisions between people,” Addington said. “It’s vital that we reflect on where we have been and learn from the leadership and wisdom of activists like MLK.”

Visit MLK Jr. Celebration to learn more about the dinner and get a ticket to the dinner before they are sold out.