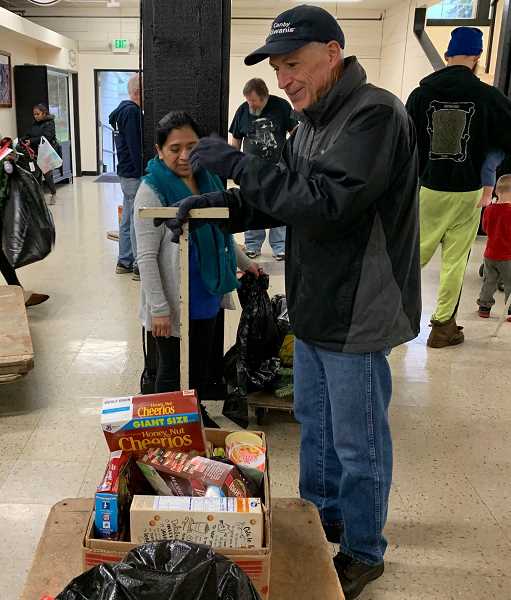 Most of us love to travel, visiting states in our homeland and occasionally taking a look at the countries that make up the world.

But few of us ever get a chance to work abroad, meet and live with the people in their culture and see what they think of Americans.

All that has been Tony Crawford’s life since last August. After the holidays, he returned to Egypt to live throughout the rest of the school year in Cairo.

Even though he’s retired, he’s having a great time in Cairo working as the academic dean for the Modern American School of Egypt, a day school located in the New Cairo district of the city. He lives in Madinaty, which means My City in Arabic. He says it’s a small town, only 600,000 people. He lives in a modern apartment building “…in a beautiful place that’s very green,” he said.

The school has 1,700 students and encompasses all grades from pre-kindergarten through grade 12. The students graduate with both Egyptian and American diplomas. The campus is an entire city block and is walled. It has five gates and security guards that wear the school colors of navy blue and gold.

Everything necessary is in the four-story tall building, which also has a floor below ground. There is a fully staffed medical clinic, a bank, a food service canteen with hot food and snacks, although most students bring their lunches. There are staff rooms for the faculty and, of course, classrooms for the kids. The majority of the students, 75 percent, are Muslim and 25 percent are Christian. There are 200 teachers, half from Egypt and the remainder are expats from various countries.

The largest number of teachers come from the United States and most of them are from Oregon; two or three are recent graduates of Western Oregon University. They get good compensation, a free apartment, full medical insurance and free transportation both to Egypt and daily to and from work, Crawford said.

His job involves overseeing the curriculum, doing staff evaluations and personnel matters. He also works on school training for teachers and administrators; helps improve teaching skills and sets student outcome goals. How does he do this? The way he learned—it’s the Canby method, he said.

“There are multiple ways of measuring student success,” he said. They don’t all have to do with testing.

Probably the most important aspects are passing on content and knowledge, skill set assets and teacher disposition. “It’s very important to build relationships with students, but it’s to more than the kids, its to parents and faculty too; that’s what makes a program successful,” Crawford told the Herald.

“The Modern American School of Egypt feels more like a big family,” he says.

Another of his jobs is training teachers, he said. Walking in he didn’t want to be seen as the all-knowing American. The teachers at the Cairo school are trained to integrate curriculum or build subjects together using math with science or history with English language arts and so forth. The curriculum includes music, art, religion—Islam and Christianity and American language.

“I took my time planting seeds to help teachers as they increase their range,” he added.

Some of the teachers lack a teaching certificate, he said, and he is working with them. He’s set up online graduate courses at MASE to complete certificate programs as well as refine teaching skills.

“I use my network here (Western Oregon University) for student teacher training.”

Teachers also are working to teach peace in the classroom; hands are not for hurting, he says. In some classrooms the kids are learning how to treat each other without bullying or hurting their classmates. The teachers give a specific lesson after which the children take a pledge, they won’t hurt their fellow students. Each then makes a handprint on a poster noting their commitment.

“When students slip, teachers quietly remind them of the pledge, making them understand what and how a commitment works,” Crawford said. Meanwhile the high school students are putting together strategies on how to overcome bullying.

His efforts, which follow his former years as a Canby District teacher, include building relationships between the students and the teachers. That’s the way to reach success, Crawford added.

“But we have more work to do,” Crawford said.

Nearly 100 percent of the students speak English as a second language. The school also offers classes in French and German and is starting to go into Spanish.

Crawford is considering creating classroom relationships with Canby District students. For example, the first such project would exchange artwork with Baker Prairie Middle School art teacher Heather Anderson. MASE already has a geography bee through National Geographic as well as spelling bees. They also provide a math Olympics and a science fair along with a STEAM program and computer programming.

As for Crawford, he’s is having a ball! When he talks about the school, its faculty, staff and students, his eyes light up and he gets excited. He talked about how welcome people are to come to Cairo and to visit Egypt and all of its gifts.

One interesting aspect he’s working on involves a teacher at the school. Ed Mohammed is from New Jersey. He and his parents came to Cairo three years ago for a visit. When they arrived, he was sent to the wrong customs window where Ed was declared Egyptian and given a visa for Egyptian citizens although he is an American, born and bred.

In his 20s, Ed became stranded in Cairo because of the wrong declaration and can’t leave because he’s not really an Egyptian citizen. Crawford is working with an aide from Kurt Schrader’s office to get Ed back to America so he can leave the city and return home to the United States.