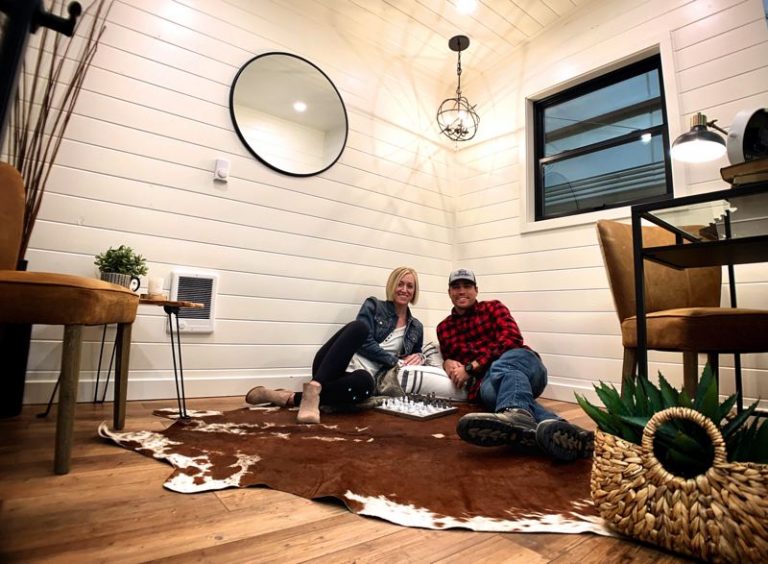 When Anthony and Jamie Taylor-Weber were looking for a work space to run Anthony’s home inspection business, they initially thought that a small space on a kitchen table in the family’s Tualatin home would work just fine.

“Even if we had a room in (our) home, it’s still loud,” Jamie Taylor-Weber pointed out.

With their two boys, Easton and Ryker, it was essential that Anthony have his own space, Jamie Taylor-Weber said. That prompted Anthony to build his own outdoor office in 2016.

Today, the couple run Outdoor Office LLC, a Sherwood-based company that specializes in what has in recent years been popularly referred to as “she-sheds,” a term whose popularity got a boost from a State Farm Insurance commercial in 2018.

“So now everyone talks about getting their own she-sheds,” said Anthony Taylor-Weber, who has seen studies that show demand for at-home offices will only increase with 30 million people predicted to be working from home in 2023.

He said the structures have proved popular because most people would rather stay where they are than to move. And he has tried to shy away from misconceptions that these are just places to store the lawnmower or other outdoor implements.

“We don’t like to see ourselves as shed builders,” said Anthony Taylor-Weber, although he suggested that if someone wants to use that term, they should think of them a “fully finished storage shed.”

“We like to call it a fully functional outdoor space,” he said, adding that the goal is educate people on an option they may have never considered before.

Acquainted with each other while attending Tualatin High School — Jamie was a state champion golfer and Anthony played baseball — the Taylor-Webers met again while students at Western Oregon University. (Jamie went on to teach at James Templeton Elementary School in Tigard.)

Jamie Taylor-Weber focuses on spreading the word about the business by using Instagram and getting the community involved. She said during the most recent Street of Dreams, a she-shed next to a $2 million home was the talk of the event. (A model shed inside a storage garage at their Sherwood business is loosely based on that model.)

A former aerospace and defense employee, Anthony Taylor-Weber not only has a construction background but also an eye for detail. He also did some research before moving forward with Outdoor Office.

“The more I looked into it, the more I found out there’s nothing like it out there,” he said. “I know of two other companies nationally, and they’re it.”

Anthony Taylor-Weber said while some people may compare the offices to Tuff Shed, he points out that all the Outdoor Office sheds are finished out.

“We actually use homebuilding practices, not shed building,” he said. “We use real 4-by-6 headers over the doors.”

They also use high-end windows and doors, and while drywall is available for the interior walls, the couple also uses tongue-and-groove pine as well as shiplap siding. Floors are plywood or wood decking. A slant-style roof makes the structures look roomy as well.

“Our completion time is four to five weeks,” said Anthony Taylor-Weber. “We pride ourselves in making almost zero impact on your life.”

The result: upscale locations consisting of anywhere from 80- to 200-square-feet that can be used to work on craft projects, for practicing yoga, or simply using the space as a small gym or home office, all with access to a full electrical hookup (provided by an RV-style plug) as well as heating and air conditioning if desired.

“Once that plug is available, we then just ‘plug’ in the office and you’ve got all the power you need — and if you need to move the office, just unplug it,” Anthony Taylor-Weber said. “Our standard HVAC system is a wall heater and programmable thermostat, you can upgrade and receive a ductless heat pump, which does do both heating and cooling in one unit. The ductless heat pump requires a slightly larger electrical upgrade, but everything we use is meant for small spaces, and we utilize a lot of the same materials and tools of the trade from ‘tiny homes’ and RVs.”

The units also are all fully insulated.

Illustrating how popular their products have become, the Taylor-Webers were recently featured on the nationally-distributed Shed Builder Magazine.

Fans of the HGTV’s cable show “Fixer Upper,” the former reality television series that featured home renovations completed by Chip and Joanna Gaines, the Tualatin couple has been in discussions with the network’s producers about the possibility of hosting a future show on the cable network

“We draw a lot of inspiration from Chip and Joanna,” said Anthony Taylor-Weber.

The business seems to be taking off. Ideally, the Taylor-Webers said, they would like to build two to three of the outside offices a month.

For the future, they would like to have the structures fully built and simply deliver them and drop them into place. Expansion could also be a possibility, but Anthony Taylor-Weber said, “We only want to grow our business if the local market demands it.”