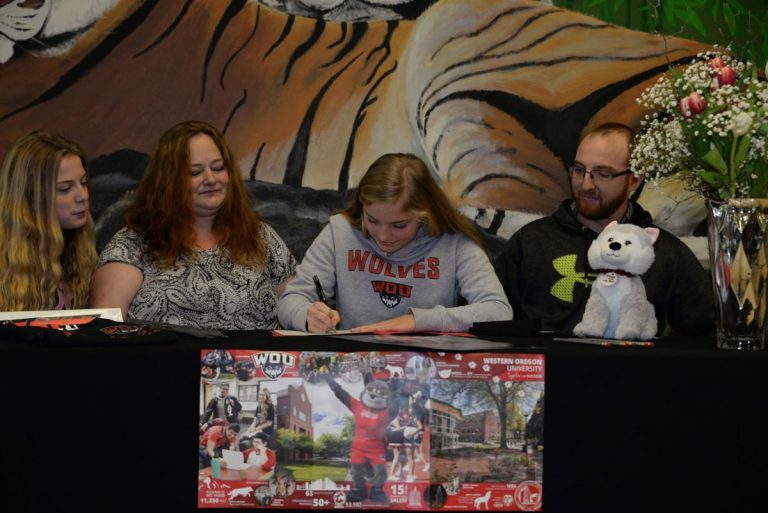 By John Gunther, The World

BANDON — Shannon Smith’s parents weren’t surprised she became successful at running even though she came to the sport relatively late — she didn’t start until the track season of her sophomore year.

It started from when she was born, 10 weeks early and weighing just 2 pounds, 1 ounce.

“She was definitely a fighter from the beginning,” said her mom, Lorraine.

Smith has proven to be a pretty good runner, and it will continue into college after the Bandon senior signed a letter of intent Wednesday to compete for Western Oregon University.

“I’m so excited,” Smith said. “I just want to see how much I can improve.

Smith had played basketball growing up, but she didn’t even consider running until her boyfriend, fellow senior Aero Franklin, encouraged her to try track when they were sophomores.

“When she went out for track, she said she wasn’t sure she even liked running,” Lorraine recalled. “I said, ‘You’ve got to try it.’”

The results were good from the start. She had a solid sophomore season and qualified for state in the 400 and earned a medal with her teammates when Bandon finished seventh in the 4×400 relay.

Then her first cross country season, she placed 24th at state.

Last spring she qualified for state in the 800, but couldn’t run after becoming ill the night before the race.

“I wasn’t sure she was interested in running at the next level,” he said. “Her senior year, she showed she’s invested.”

And she has a high ceiling for improvement, Hutton said.

“They were really excited to get her.”

In Monmouth, Smith will join Hunter Hutton, Brent’s son, on the cross country team. Two other runners who graduated with Hunter in 2018, his twin sister Sailor (Boise State) and Josh Snyder (Portland State) also are running in college.

“This is the one thing I really wanted to have out of my program, is that kids see they can run at the next level,” Brent Hutton said.

Franklin also had considered running in college, but instead plans to enter the Army with the goal of becoming a Ranger.

Smith is thrilled for the opportunity to run for the Wolves and study at Western Oregon. Her eventual goal is to be a dental hygienist and she can take some classes toward that.

She was also drawn to the school because of the small-town feel of Monmouth and the university.

Smith’s parents said they are proud of her and excited to see her get the opportunity to run in college.

“She’s put in a lot of hard work, a lot of dedication,” Gary said.