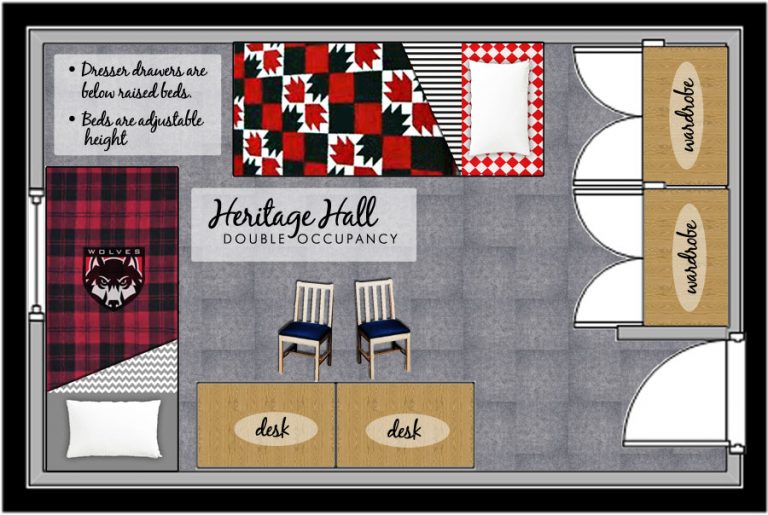 Heritage Hall is a four-story, stand-alone building that houses first-year students. The RA of Fourth Christensen, Leah Coyle, defines Heritage and its community as overall welcoming. The programs, environment, and atmosphere are interesting, safe, and inclusive. One of the notable benefits is the halls’ layout, shaped in a T formation with a community area in the center, titled the “fish bowl” by residents. Students have the opportunity to gather in the fish bowl and socialize, and Leah emphasized the camaraderie between coed residents, as they are not divided or isolated by gender. While Landers has pods connected by catwalks and parts of halls divided by gender, Heritage is inherently connected. As she directly stated, “It definitely is a great focal point, because they’re able to come out of their rooms, and especially because I have a coed hall, so it’s great to see [them] intermingling and talking and growing in that space. So, it’s really easy to have that heart of the hall.”

Heritage Hall’s resources are abundant. It is the closest residence hall to Hamersley Library, but if students do not want to travel to the library at night, there is a study room on every floor. On the fourth floor, there is a ballroom if students want to practice dancing within the residence hall. On the first floor is a conference room for group study sessions. There are also vending machines for late-night snacks, and Valsetz is also in close proximity. Additionally, with the dining hall’s ReWOUsable boxes, residents can easily bring their food back to their rooms or to other locations. RA’s themselves are always available to help residents, offering them information or guiding them to campus resources. Leah also stated that Heritage has a great neighbor system, meaning there is a considerate proximity between rooms, and residents tend to be friendly and accommodating to neighbors who knock.

The Heritage community, as described by Leah, is “a safe place for students.” Furthermore, the community is social, inclusive, collaborative, and involved–especially in hall government. “This year, we have a really welcoming, interesting area,” Leah stated, when speaking of her residents. She made note of how these residents are socially active and communicative with each other and those outside their own hall. Leah took particular note of their interest and dedication to learning braille and ASL. Heritage promotes a community-based curiosity and spirit of inclusion, creating the kind of atmosphere where first-years can learn, explore, and grow together.

As with all first-year residence halls, Heritage RA’s and communities conduct many fun and informative programs throughout the academic year. This past year, Leah helped create and participate in many programs, and she spoke extensively about two of them in particular. She and her residents participated in Alcohol Awareness, “our very first big program in Heritage […] that had alcohol-based games with hidden meanings in them. Then we did skits in the middle of the program, where we had the residents decide how to solve the situation,” such as party safety and stepping in when social gatherings took an unsafe turn. Additionally, they hosted the Big Summer Blowout. “We had 220+ attendants, which was really great, and it was just a way to get them excited for summer and to have some fun right before finals start, because we know we can’t just pull them away from their studying.” The RA’s work collaboratively and enthusiastically to create and provide community events that will educate, entertain, and engage their residents in a safe and positive manner. Ultimately, the first-year housing experience is centered in community and equality, and the Heritage RA’s and residents collaboratively strive to cultivate that atmosphere.