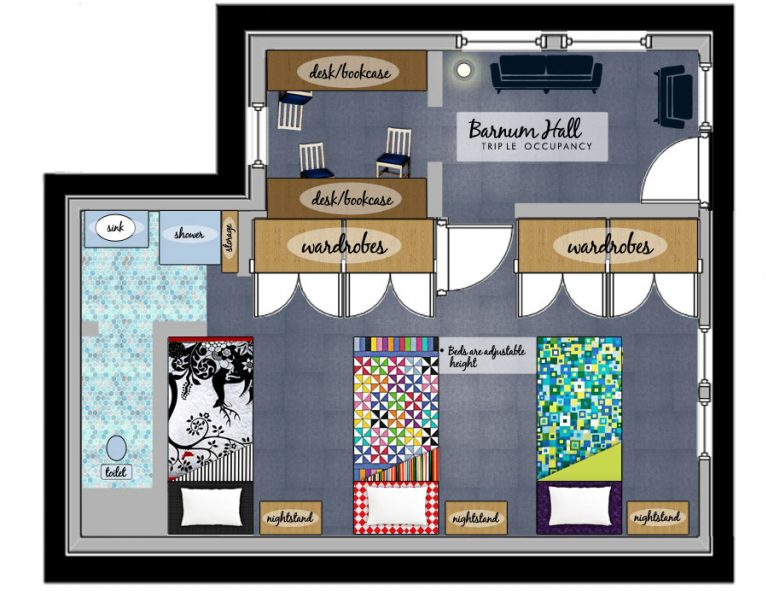 Of all the housing options at WOU, Barnum Hall differs most. Jojo McGee, a Barnum RA from this past academic year, characterizes the residence hall by its layout, as it is very similar in feel and practicality to an apartment. Because Barnum is not comprised of halls that share bathrooms and other gathering spaces, residents tend to grow most close with their roommates. As of next year, there will be three floors open to residents with two pods per floor. Each pod is made up of four units. Within one unit resides three students, and the space is made up of one bedroom, one bathroom, and one living/study area. The private space is overall large, and the separate parts of the unit allow students to find privacy and quiet no matter the others’ schedules.

Although pods aren’t connected by shared indoor halls, they do traditionally include a community pod per floor, which is comprised of a laundry room and a common lounge. The apartment atmosphere encourages further independence, but unit neighbors tend to be more friendly amongst each other than in traditional apartment experiences. Jojo describes the overarching community as a friendly environment. Furthermore, Barnum residents are still included in all the programs and campus activities intended for on-campus students. Jojo and other Barnum RA’s conducted their own residence hall-specific programs, most notably being the BarnLand Meet and Greet. It was designed to connect residents, and many Barnum students made friends within their dorm and even with some students from Landers.

Barnum is very close to the RSC, where students can pick up packages and use the residential computer lab. It is also connected to Valsetz and the C-Store through sheltered catwalks; the location is convenient for students’ schedules and lifestyles. As for the greatest benefit of the unit themselves, Jojo said that her residents enjoy the private bathrooms the most. Rather than using open bathrooms with multiple stalls, theirs are single-occupant. In the same vein, her residents share the sentiment that “Your space feels more of your own.”

Barnum encourages an independent lifestyle and strong connections between roommates. Despite the apartment-like environment, RA’s are always available to offer assistance to residents, and campus resources are available to Barnum residents as well. Barnum Hall differs from the atmosphere of other residence halls, but just like the other halls, it holds its own special appeal–Barnum’s being centered in a more private and self-driven lifestyle.

It is important to note that as of this article’s publication, Barnum will only be available for upper division students.