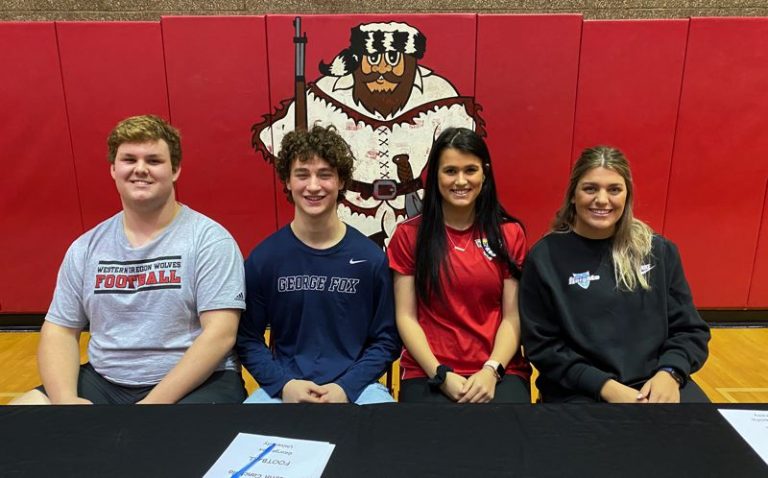 “This is what I’ve been working for ever since I started playing football in the seventh grade,” said Zumwalt, the 6-foot-2, 280-pound lineman. “This is the sport I love and I want to keep playing this as long as I can.

“It’s a pretty great feeling knowing that I get to play longer than some other people get to. So, it’s pretty special to me.”

Zumwalt was a three-year starter for the Pioneers and was twice named to the all-Three Rivers League, first-team offense, first as a guard his junior year and then as a center his senior year.

He considered an offer from Southern Oregon University in Ashland and also looked closely at some of the state’s top Division III schools, but settled on Western Oregon after making an official visit to Monmouth last month.

“It just felt like a good fit for me and it’s close enough to home that my family can come to all the games,” said Zumwalt, a three-sport standout who also lettered in wrestling and baseball. “I really like the coaching staff and everybody there made me feel like they wanted me there, which was a big part of my decision.”

Zumwalt signed his letter of intent Wednesday morning — the first day of the signing period that runs from Feb. 5 to Aug. 1 — and faxed his documents from the Oregon City athletic department about 7:40 a.m. with help from athletic director Andy Jones and athletic secretary Joan Ferguson.”Once I sent it over and the coach texted me to say that he got it, it was a relief to know that it’s finally official,” said Zumwalt, who plans to major in business and hopes to pursue a career in sports marketing.

Canchola’s decision to pursue an opportunity at George Fox was a natural choice to make, considering his older brother Alex played two years of football for the Bruins and was a multi-event standout on the track and field team during all four years.

“George Fox came and talked to me,” said Canchola, a 6-foot, 165-pound defensive back who earned all-league honorable mention as a senior. “I like the community and the small-school atmosphere, and on my visit, all the players were super-cool and easy to relate to.”

The school also offers majors in the two fields of study that interest Canchola the most — engineering and nursing.

“Playing football in college has been one of my goals since I was a kid,” he said. “I feel this is a big accomplishment to be one of the few that goes on to play in college.”

Feliciano transferred to Oregon City for her senior year from Union High School in Vancouver, Washington, and was drawn to Portland Community College through her club soccer connection with the Eastside Timbers.

Her primary position is defense and she hopes to play left back for the Panthers of the Northwest Athletic Conference.

She also plans to study early childhood education in preparation for a possible career as a preschool teacher.

“It really means a lot because I was in a car accident my sophomore year of high school and I wasn’t sure if I could come back,” Feliciano said. “I’m honestly super-excited and thankful for the opportunity.”

Willett decided to accept an offer from Warner Pacific in large part because “it was close to home.”

“I didn’t want to go far away for school or to be too far away from my family, she said. “Location was definitely a big deal for me.”

Willett earned first-team, all-Mt. Hood Conference and second-team, all-state honors as forward during her sophomore year when she scored a team-high 27 goals for the Pioneers. She then earned all-Three Rivers League honorable mention each of the past two seasons as an attacking midfielder — the position she hopes to play in college.

She also plans to pursue a degree in veterinary medicine.

“Two years ago, I made a decision that I didn’t want to play soccer anymore because I was really bored from constantly playing the sport,” she said. “Then I found out how much I missed the game, so I picked club soccer back up again and … here I am.”