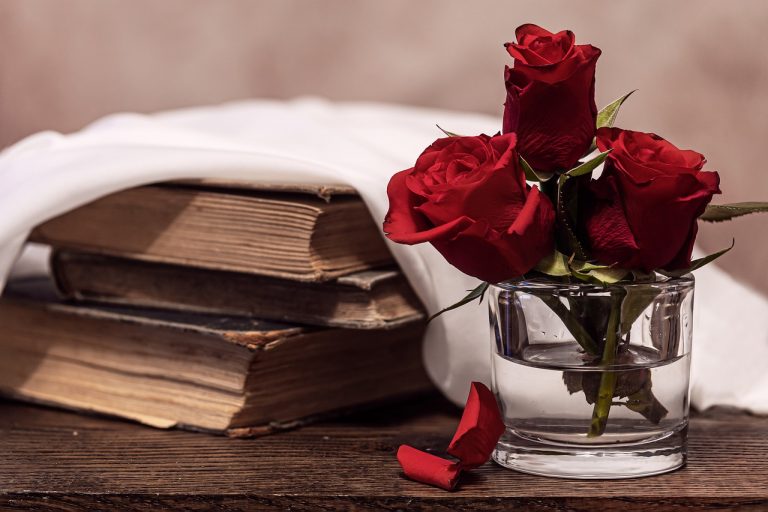 There are countless stories of how alumni of various eras met their spouses at Western Oregon University.

A high school friendship that grew into a romance.

A glance in a classroom that eventually led to a marriage proposal. Instant chemistry when meeting at an athletics event.

In celebration of Valentine’s Day, Today at WOU interviewed four couples who shared their stories of meeting at college, falling in love and getting married. 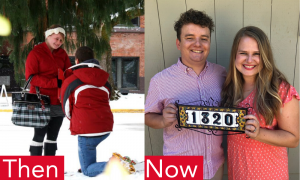 Daniel Tew ’14 noticed the poster with a picture of Kelsey Gray outside his residence hall room on move-in day. Reading it, he realized that Kelsey Gray, who was a peer mentor, and he had a great deal in common.

To his dismay, his mom mentioned that she thought Kelsey Gray was cute.

“I found this embarrassing as I was ready to leave the nest and make it on my own in college,” Daniel said.

They initially became friends and eventually started dating. He proposed to her under the sequoia tree on a snowy day. They have been married more than five years.

“Western Oregon was not only where we met but was a place where we made many lifelong friends,” Daniel said. “Our wedding party consisted of nine past, current and future Wolves.”

Kelsey ’13 said they have a family legacy at WOU.

“Both of us have siblings and fathers who attended as well as some cousins, aunts and uncles. WOU always feels like home, and we’re proud it’s such a big part of our story,” she said. 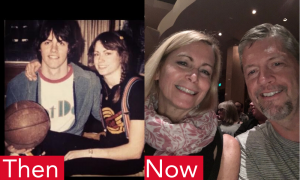 “My parents had brought me down to move into the dorms,” Ron, 59, said. “I first saw Kathy in the Landers Hall parking lot.”

They would see each other in their dorm hall or on campus. Their roommates became friends, which led to them becoming friends.

“I had a big crush on him winter term,” Kathy said. “He was cute, nice and taller than me.”

For Valentine’s Day, Kathy gave Ron a card with a Dalmatian next to a heart. “It read something like ‘There’s a spot in my heart for you,” Kathy said. “I did not give anyone else a card, but Ron thought it was just a normal card that I gave to many different friends. I was so nervous when I gave it to him, and then he didn’t even react to it.”

It wasn’t until after they started dating that Kathy told Ron he was the only person she gave a Valentine’s Day card.

The Clarks, who both graduated in 1983, have been married for 35 years.

Ron said he knows many people who meet their spouses in college. “The fact that you are both at the same college suggests you have some things in common,” he said. “But a long marriage requires more than similar interests. It requires mutual request, and a willingness to compromise. If both spouses care more about the other’s happiness than their own, they have a chance for a long marriage.” 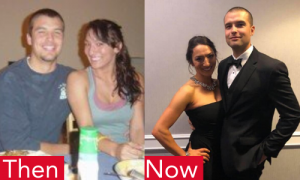 They met on a boat dock in the San Juan Islands before their freshman year at Canby High School. Jacque Postlewait was headed to soccer camp with friends, and Chris Helbling was with his parents to go sailing.

Although they spent time hanging out with friends that summer, Jacque Postlewait told herself they were just friends. Chris Helbling reminds her she did kiss him first that summer.

“Jacque spent most of high school allegedly thinking I was quite annoying, and two of our good friends dated in high school so we spent a decent amount of time around each other,” Chris Helbling said. “Things kind of fell magically into place in high school, setting us both up to attend WOU.”

“While we were good friends, she didn’t actually fall for me until the summer before our sophomore year at WOU,” Chris Helbling said.

They married before their senior year of college in 2008.

“The thing about our story is once we finally got together, the rest was history. As soon as we started dating I knew this was it, he was ‘the one.’ We knew each other so well already, and we just fit. It was and is still so amazing, and that is why we have what we have. You can’t run from the inevitable for forever.”

For their first Valentine’s Day, Chris Helbling made Jacque’s favorite dinner of crispy chicken salad with honey mustard dressing and minestrone soup for a powder mix while she was at track practice. A friend purchased a bottle of wine.

“The $11 bottle of Duck Pond pinot gris was the most expensive part of dinner,” Chris Helbling said. “Every year, we make the same dinner with our own wine now and eat with the kiddos in the dining room.”

They have been married almost 12 years, have four kids and keep busy running their family businesses, Whiskey Hill Winery and Postlewait’s Vineyards. 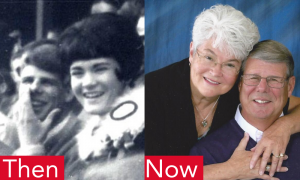 This fact is crucial to understanding the Pratton’s love story because even his friends were completely amazed he met the woman he would marry on the first day of their first college class in fall 1964.

“I noticed her because she was so pretty, a raven-haired girl in an era of blondes and so talented,” he said.

Norah Davenport was B-9, and Jerry Pratton was D-12 for their seating assignments in their math class. “I believe I paid more attention to her than Dr. Thompson’s lectures,” he said.

Although he saw her on campus and they talked briefly, Jerry Pratton was too shy to ask Norah Davenport out.

“You know, the guy thing where I was worried about rejection,” he said. “So, I decided to write her a note.”

He placed a note in her student post office box reading, “Dear B-9 would you like to go to the Homecoming Dance with me? — D-12.”

The next day, he watched anxiously as she sat down in math class.

“She turned and started counting rows and seats and when she got to D-12, she smiled and waved, much to my relief. After class, we met and walked and talked for some time,” Jerry Pratton said. “Norah was the last girl I dated.”

They finished college in three years, and they married June 10 in Portland, after taking a final the same day in Monmouth.

“We have been married for 53 years and Miss B-9 is still my girlfriend,” he said. “She is still a delight.”