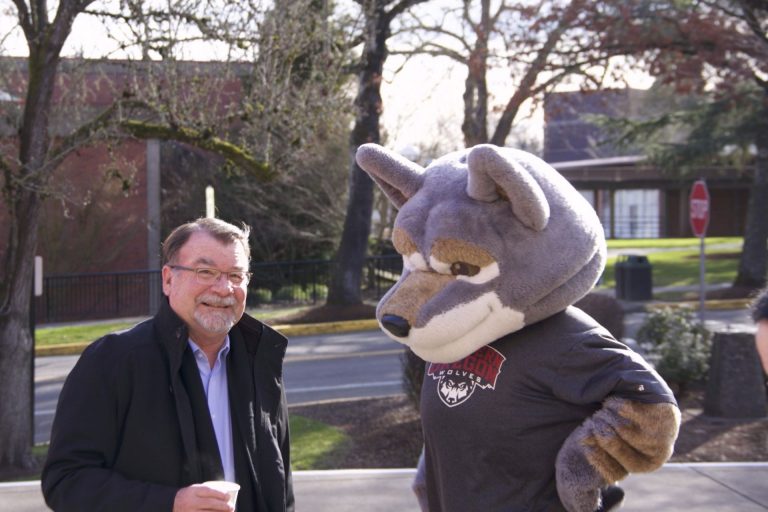 This is the first in a series of stories highlighting WOU employees.

By Cheyan Swan and Erin Worley

We all have big aspirations as children, but the careers we follow in our adult lives can be just as important as those we dreamed of. In Western Oregon University’s president’s case, Dr. Rex Fuller aspired to be a professional baseball player when he was a kid, spurred by his love for the Los Angeles Dodgers. As he got older, he discovered an interest in analytics, and he pursued a Ph.D. in Economics from the University of Utah. However, his path soon changed to administration, which ultimately led him to WOU.

In honor of Presidents Day, we chose to visit our university’s own president to ask him about his career, his aspirations, and our community of Wolves.

Fuller’s office is a large and surprisingly welcoming space. Aside from his wide desk, the primary furnishings are comprised of a fluffy sofa by one window and a round table in the center of the room, coaxing conversation and intimate meetings. His walls are far from bare, one picture close to the door displaying a map of the entire WOU campus. Most notably is the artwork situated directly across from Fuller’s desk, a rather minimalist piece that captures a mindset the president abides by: “look ahead.” While the bottom of the image resembles intricate, winding pathways, it grows broader higher up, the layers changing like earth’s strata. The top section looks particularly like silhouetted mountains and a hazy horizon beyond. Rather than focusing on small issues and the details of the day to day, Fuller strives to keep himself focused on the long-term. What big projects are most going to benefit the staff, faculty, and students that this community is comprised of?

When initially inquiring for an interview, we noticed how accessible Fuller makes himself. We easily got in contact with LouAnn Vickers, Fuller’s executive assistant, and were able to set up an appointment for a meeting in his office rather soon after reaching out. Of course, we had to ask about that aspect of his job, and why it is so important for him to be accessible to everyone in this community. Fuller replied with simplicity and confidence: “What we do matters.” This is not his first job in education, so Fuller has an acute understanding of the importance of communication and consideration. Public education is a vital resource for upcoming generations, and it should be treated as such. To improve the experiences of WOU’s students, they must be shown care and assistance. Education raises understanding, and that critical consciousness impacts more than just the students who graduate from this university–it affects the people our graduates interact with, as well.

Before he became the president of the university, Fuller stated that he, “wanted to come to campus when people weren’t trying to impress me, and I wasn’t trying to impress them.” He and his wife Susan walked along the paths at WOU, and he mentioned that they were treated with the same respect then as they were during the interview process. He suggests to prospective students and parents to, “walk the campus, imagine yourself being here. That’s what this decision is about.” There is a level of inclusivity to WOU that you don’t always get with other universities; WOU is a genuine campus that treats strangers the same they do esteemed faculty members. He calls the university’s widespread inclusivity “the Western way,” and it can be seen through how faculty engage with their students, and how WOU supports all types of student experiences and backgrounds through clubs and cultural events. 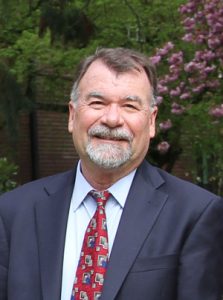 Fuller holds staff and faculty to the same standards as himself, encouraging an “eyes up” philosophy, especially among newer and younger faculty. WOU is intended to be a welcoming and inclusive community, and to attain this standard, employees pay special attention to students and any troubles that they face. If a student seems off or upset, WOU staff and faculty seek to provide help and care to get them back on track. It’s all about engaging with fellow community members.

Fuller wants to ensure that he’s experiencing the full array of student events. He tries to attend plenty of celebrations and events, from music to theater, to athletics and more. This, he says, allows him to get a better understanding of the campus experience, in order to best serve the student community.

When asked about his favorite annual event on campus, in true diplomatic fashion, Fuller couldn’t choose just one. He mentioned that commencement is one of his favorite days of the year: seeing students, many of whom are first-generation, walk across the stage and enter into a new stage of life. On the other side of that, he said that he enjoys the sunrise tradition, wherein first-year students wake up early and head to the stadium to watch the sun rise. It’s the beginning of a new chapter for the first-year students, and Fuller enjoys the chance to experience it alongside them.

He likes to stay up to date with current events. In fact, on Saturday mornings when he is not involved with a WOU activity, you can find him catching up on the news by reading national newspapers and drinking a cup of coffee. When the weather gets warmer, he might head out for a round of golf on a sunny weekend. He likens these activities to self care, which he mentioned is important to everyone’s mental health.

As for where Fuller sees the university in the future, he mentioned that he is excited about the development of WOU:Salem, with its focus on hybrid classes and courses that better suit students with other responsibilities. He also sees a development in the health and sciences department. In the next 10 years, Fuller predicts that there will be a rebalancing of undergraduate and graduate courses. He mentioned that there will not be a diminishing of opportunities for undergrads; rather, new paths for graduate students continuing their education. In the future, when potential students are deciding their top three Oregon colleges, Fuller wants to see Western Oregon University on every list.

2 comments on “Get to Know WOU’s President: Rex Fuller”