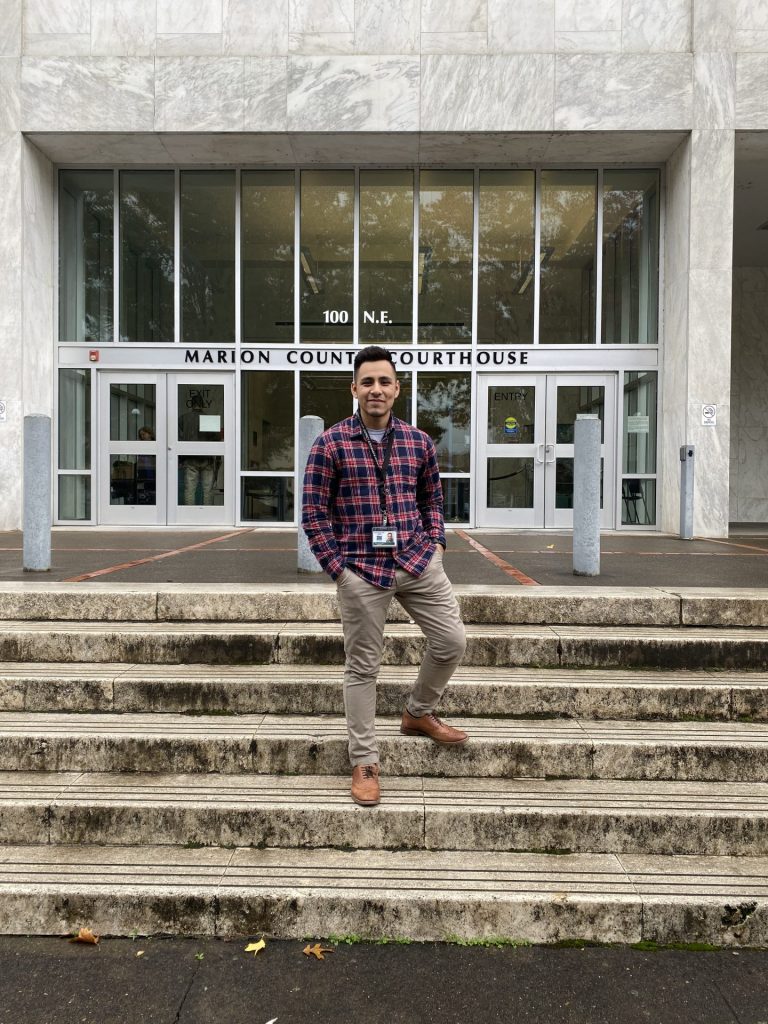 At WOU, many students have participated in internships that correlate to their career goals. One of those students is junior Leo Marquez, a Criminal Justice major who completed an internship last fall with the Marion County District Attorney’s office. As a student intern, Marquez informed victims of their rights, provided assistance to these victims, attended district dttorney hearings, among other vital tasks. He mentioned that the interns helped provide emotional support and reassurance to the victims while remaining professional and confidential.

Marquez discovered this internship through a career fair at WOU, where he met the coordinator of the Victim Assistance Program. After he completed the initial application, he underwent an interview process and a background check. Marquez began his internship in March and finished up in mid-October, but plans to stay on as a volunteer with the DA’s office.

When asked about the most challenging aspect of the internship, Marquez was quick to answer with the mental aspect. He mentioned that some might say the hard work and the grueling amount of cases, but ultimately what challenged him was the details within the police reports and the struggle to deal with the violence and abuse cases he was privy to. To combat this, the DA’s office was incredibly supportive and continuously checked in with the interns to ensure their mental health was not being negatively affected.

Marquez’s favorite aspect of the internship was the satisfaction brought about by positively affecting the lives of the victim. Working with victims, especially those of violent crimes, means your assisting people at what can be the worst moment of their lives, so it is often a thankless job, but Marquez was able to obtain gratification through the positive outcomes of some of the cases. Another aspect of the job Marquez enjoyed was learning to “understand the dynamics of a crime and why crimes are committed, the psychological aspect, especially.” By understanding the motivation behind a crime, it’s easier to prevent it from happening again.

As for his advice to other students interested in this same internship, Marquez mentioned that frustration will occur, especially in the first few days, so it’s important to mentally prepare before entering into the position: “Be patient. There’s going to be a lot of hard days. Frustration is inevitable in the criminal justice system.”

Marquez actually has an incredibly personal reason as to why he chose to pursue this internship, and Criminal Justice as a major. When he was just 12 years old, Marquez and his family were victims of a home invasion. He said that it “changed the way I perceive a lot of different things about law enforcement,” in that the support he and his family received after the home invasion was surprising. Officers took time to explain to Marquez’s family what happened, ensuring they were okay, and connected them to resources available to them. He recognized the positive impact law enforcement had on him during the troubling time, and he wants to be that for other victims.

Ultimately, Marquez’s goal is to become a member of the FBI, and can even relate to former FBI director James Comey, who was similarly faced with a home invasion at the age of 16. When asked why the FBI, Marquez responded “I just want to be able to have that challenge, that responsibility to be there and make a difference in other people’s lives.”