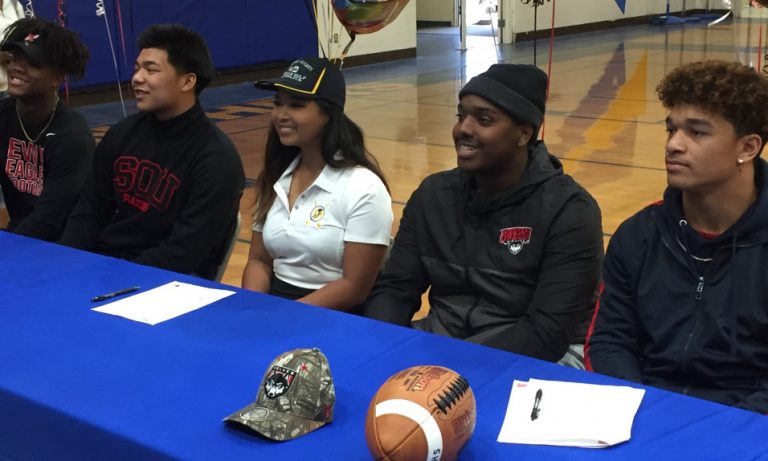 Five Benicia High student-athletes recently found their true north and their decisions were celebrated at a Thursday ceremony where they signed their letters of intent for college.

While golfer Angel Antonio will remain in the North Bay by attending Dominican, Benicia High football stars Derek Campbell and Maurian Burrell are headed to Western Oregon, Braeden Yee is going to Southern Oregon while Kameron Lane’s drive will be even further north as he will be attending Eastern Washington.

Coaches, students, teachers and ex-teammates came out during lunchtime at the school.

Lane made his decision to attend the Division I school before his senior year, but it was still an exciting day for the senior, who played all over the field for the Panthers.

“As soon as I officially signed in December, it was a big relief, just knowing where I was going to be for the next four years and having a full-ride scholarship,” Lane said. “Today is definitely a celebration as this has been a dream of mine.”

Lane, who plans to major in nursing while possibly minoring in business, said Eastern Washington plans on using him in a few places on the field.

“They liked me as a quarterback on offense, but on defense they want to be play a lot of cover safety,” Lane said. “They’ll probably have me returning the ball on kicks. They told me that they like that I’m a playmaker and they want to put the ball in my hands.”

“Kameron is an unbelievable athlete,” Holden said. “He can do a variety of things and he’s talented at everything he does. I don’t say that lightly but he actually is. I don’t want to make his head any bigger but he is, he’s talented at everything he does … He’s very coachable and he’s a big team player. He was our quarterback for three years, but his senior year he only played about 50 percent of the snaps at quarterback because we had a sophomore who needed reps. He benefits our team better with that and him at wide receiver or somewhere else and he was not selfish about it. He’s helping us develop the younger kids and that shows a lot of maturity on his part.”

The athlete staying the closest to Benicia of the five athletes signing was Antonio, who will continue her career on the links at Dominican in San Rafael. Antonio, who has a 3.4 grade point average, began playing golf at the age of 11.

“I liked Dominican because they are very lenient when it comes to school. If you have a lab one day they will let you skip practice to focus on that,” Antonio said. “I met some of the team and they were very welcoming of me, even though they didn’t know me and I wasn’t on the team yet. So I feel very excited to go there. It’s the college of my dreams.”

Both Campbell and Burrell are headed to Western Oregon, and Burrell, who plays both offense and defense, admitted that Campbell urged him to go there.

“When I went there (Western Oregon) I really liked the vibe,” Burrell said. “I liked the connection I had with the coaches. And yes, he (Campbell) was convincing me to go there. That’s another reason I chose Western Oregon, it will be fun playing with him again.”

Campbell said he felt like he was at home when he first visited Western Oregon and he also liked the campus.

“It was large enough to be a big college campus, but not big enough that you get lost in it,” Campbell said. “When I went there I stayed overnight and that’s not something I’m usually comfortable with, but I was comfortable there.”

Holden had kind words for Campbell at the ceremony.

“He wanted to play quarterback, punter, kicker, just about every position besides what we thought would be his best position,” Holden said to a few a laughs in the crowd. “But at some point the light bulb clicked on and he realized he could be a dominant, dominant defensive player for us. In the summer I saw him change, and it happened in the weight room. He dedicated himself in the weight room and then we went out on the field and he dedicated himself on the field.”

Holden said the player he will most likely watch the most in college is Braeden Yee, as he will be joining Holden’s son to play for the Raiders.

“He’s a team player in all sense of the word,” Holden said. “He switched positions the offensive line and also had to change his number. Not only did he do that, but he did an unbelievable job at that. Why? Because he’s smart. For college I would say he might have to do the same thing and my advice is do what will get you on the field faster. I know he’s going to be a dominant player at Southern Oregon.”

“I liked that it’s not too far away, but also not that close to here,” Yee said. “I liked how their environment was family friendly. The coaches said I’ll most likely play defensive line or tight end. I think they liked how much I respected the game. So I’m pretty excited because ever since I knew I wanted to play football in college I have been waiting for this day.”