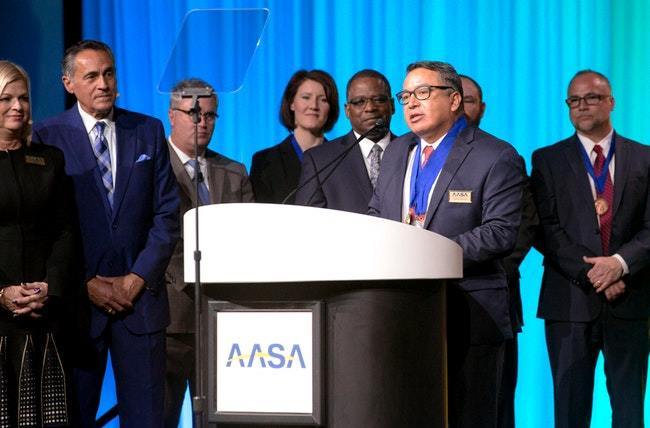 Balderas has led the Eugene School District since 2015.

The award, given by the national School Supertintendents Association, honors school leaders across the country who are influencing students’ lives.

Balderas was one of four finalists. He thought the award was going to someone else.

“It’s humbling and unexpected,” he said. “It’s an honor to be recognized for all the work we’ve done in Eugene.”

Balderas, who in September was named Oregon Superintendent of the Year, said the award is a testament to the collective work that’s been done in his district.

He said he’s most proud of his part in reducing the achievement and opportunity gaps in Eugene.

Since he started working there, graduation rates overall have improved by 14 points. For Latino students, the number shot up by 19 points.

Still, Balderas is not yet satisfied.

“We are not where we need to be,” he said, but his district has seen marked improvement among marginalized kids and students in poverty.

READ At the Sherborn Library – Enterprise News
When he got to Eugene, Balderas said the system that covers 32 campuses and about 17,000 students was decentralized.

Schools would buy their own curriculums and have individual systems.

“That causes inequities,” Balderas said, “because you have the haves and the have-nots.”

Equity can seem like an overused term, said Balderas. But he’s seen first-hand how intentionally focusing on kids most in need can pay off.

In Eugene, he said, “We tried to work to standardize and have a viable curriculum for all kids.”

It wasn’t just about the systems, he adds, it was about people too.

Balderas has worked to diversify the workforce in his school district. In Eugene, he said 39% of principals are leaders of color.

Representation is not everything, he said, but it matters. And it’s one of the variables that creates success.

“There’s a lot of research that speaks to the power of having someone – either a teacher or an administrator – who looks like the student body or speaks the language,” Balderas said. “A lot of research speaks to kids performing better academically and behaviourally because of the connection they have with those folks.”

“We also worked with families,” Balderas said. “It’s not just about the students, it’s also about their families.”

Speaking of his own family, he shared memories of living in a now-shuttered labor camp in Nyssa by the river for a few years after his parents moved from Washington, where they picked berries.

READ Today’s Question Feb. 19 – Sentinel & Enterprise
His family bounced around and he, too, worked in the fields.

He went through the public school system, graduating from Nyssa High School in 1985 and Treasure Valley Community College in 1987. Balderas went on to Western Oregon State College for his teaching degree, and then Portland State University for a masters, before completing a doctorate at the University of Oregon.

Balderas, the first Mexican-American to receive the national superintendent award, said he comes from humble beginnings. His mother still lives in Nyssa. He’s excited to serve as a model for other students who may relate.

His message to them?

“It’s all about following your dreams and passions,” he said. “Be strong, be resilient. There will be people in your life that will say you can’t.”

“My strong belief is that everybody can with the right support,” he said.

His award comes with a $10,000 college scholarship that will be presented in his name to a student who graduates from the same high school as he did, according to a press release. That means a Nyssa senior will qualify.

“Going from there to where I’m at now is pretty humbling,” said Balderas. “It’s a tribute to the great teachers I had growing up. If I can inspire one young student who looks like me back home to do what I’m doing now it’s all worth it.”