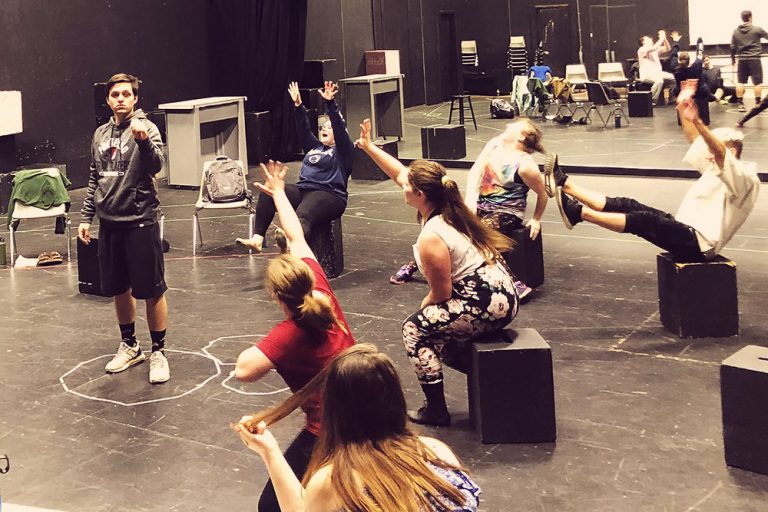 What happens when a hero challenges a sinister government official who has imposed a fee for citizens to pee?

The only way to flush out the answer is to attend the Western Oregon University Theatre department’s presentation of Urinetown, The Musical on Feb. 27-29 and March 4-7.

A tale of corruption, greed, shenanigans, love and revolution, Urinetown is a musical satire bound to having audiences blushing and bursting with laughter. WOU’s version of Urinetown takes place in a Gotham-like city experiencing a severe drought. Citizens are forbidden to use their private toilets, and they must pay to use a public one. Anyone caught breaking the law is banished to the inescapable Urinetown.

“The show is super well-written, and some of the jokes are straight-out hilarious,” said Fritts, who plays the hero, Bobby Strong. “Urinetown is not your average musical because it takes every musical stereotype and messes with it.”

Weinstein plays Soupy Sue, a sweet pauper trying to hide her crush on the play’s hero. “Urinetown is an over-the-top acting experience that many actors don’t get to have in musicals in college,” Weinstein said. “The best part for me is to just experiment with my character and try some crazy and creative things.”

WOU Theatre Professor and Urinetown Director Michael Phillips encourages the audience to see how many references they can find to well-known musicals and films weaved into Urinetown. “Some are in the music, some in the lyrics and some in the lines,” he said. “We even included some new references in the staging. At times, the references are glaring, but often they’re quite subtle, so have fun trying to identify them all.”

Rosenau, who plays Dr. Billeaux, said Urinetown takes a satirical stance on topics such as capitalism and class division. “The playwright Greg Kotis analyzes those topics in a humorous way using clichéd theatrical elements, references to other musicals and caricatures of everyday people,” she said. “WOU’s production of Urinetown will make people laugh and will win their hearts.”

Tickets are $14 for general admission, $10 for senior citizens and WOU employees, $8 for students with ID and free for WOU students with ID. Tickets are available in person, by phone at 503-838-8462 or by email at boxoffice@wou.edu. You can also buy tickets online here.