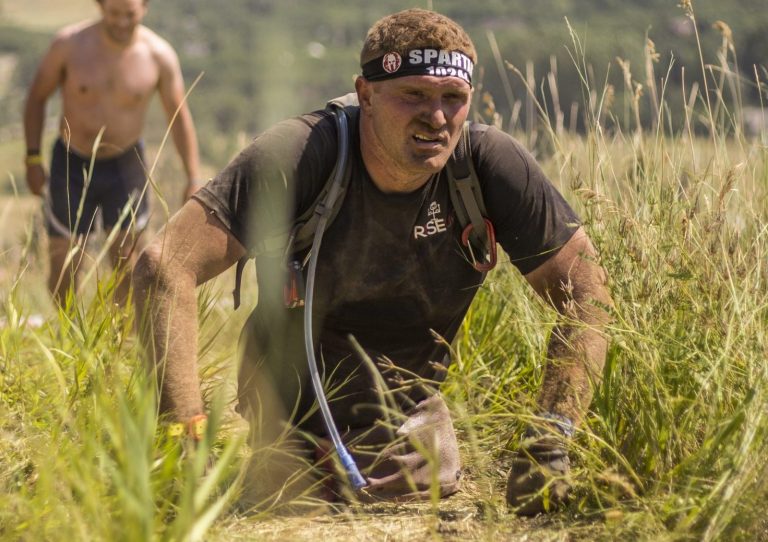 When he was 6 years old, McCallister attempted to run across a divided highway and was struck by a semi-truck. He believes he was incredibly lucky to survive; the accident severed his left leg, then his right leg had to be amputated.

McCallister still remembers his mom telling him after the accident that if he wanted to do something, he would have to find a way to make it happen.

“My life has never been one of calm indifference. From an early age, I learned that life is to be lived, not just survived,” McCallister, 33, said. “Even before the accident, I knew life was an adventure. After the accident I found the ability to conquer unimaginable things.”

From being a three-sport athlete at McNary High School in Salem to competing in endurance obstacle races, McCallister has discovered a way to do the “hard things.” He walks and runs on his hands and knuckles.

“I mean, who could imagine that a guy without legs could complete a 50-mile hike, make it to state championship wrestling or become an Eagle Scout?” he said.

Now a motivational speaker, McCallister said his most recent challenge was writing his book, When Life Gets You Down, Rise Up!, which he calls a testament to his message to find a way to persevere.

“I was an awful writer, but like everything else in my life I kept at it until I was able to transform myself into someone capable enough to write an incredible book,” he said.

McCallister acknowledges his story may be uncommon from everyone else in the world, but that is kind of his point.

“All our stories are different. Nobody has gone through the exact same thing as anybody else, but we all must put the same principles into practice,” he said. “When we fail, we need to use it as an opportunity to learn.”

During this uncertain time caused by the coronavirus pandemic, McCallister said many people are frozen by fear, frustrated by the unknown and disabled inability to effect change.

“We must change. How? I don’t know as I am still figuring that one out myself,” he said. “But I am not afraid because I know that even if I do it wrong, I will be able to try again to do it better.”

McCallister believes every trial people endure will push and challenge them to obtain their full potential. For him, it was losing his legs. For others, it may be school, work, parenting or just dealing with the complexities of day-to-day life.

McCallister encourages people who are struggling with physical, spiritual or emotional trials to find a way to learn how to be resilient and to thrive amidst life’s challenges.

“The thing is, all of us can gain these skills,” he said. “If you are struggling with basic things in life, then get out there and do something truly hard. Choose your hard. There are parts of life that truly are difficult, but if we know where we are headed in life then those challenges can only help us on our way, no matter the setbacks.”

To learn more about McCallister or his book, visit Rise Up.