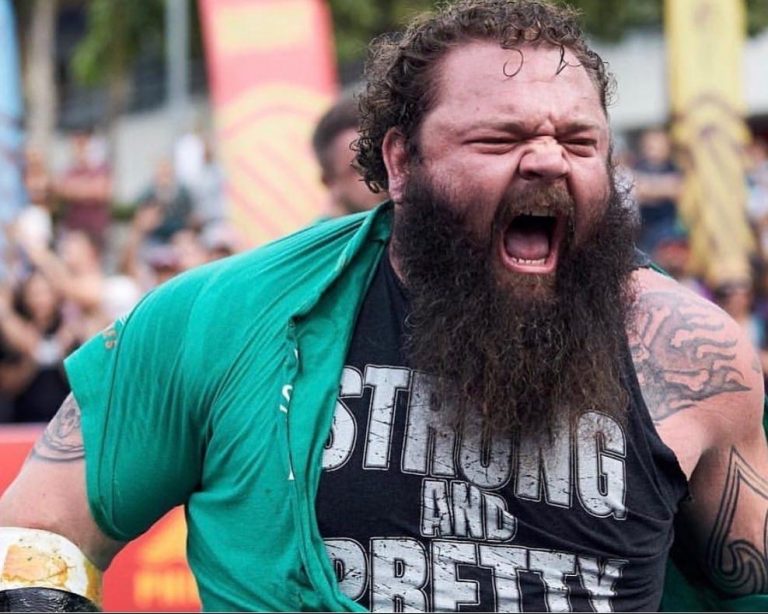 Picking up logs with his bare hands, carrying a grand piano on his back, lifting a 40,000-pound monster truck and starring in “The Strongest Man in History” are a few of Robert Oberst’s accomplishments.

A Western Oregon University alum, Oberst ’11 is a professional American strongman who has competed in the World’s Strongest Man competitions, reaching the finals five times.

None of those accomplishments compare to the one that matters most to him.

“Being a dad to my 4-year-old son, Atlas Bear, is what brings me happiness and fulfillment,” Oberst, 35, said. “Everything I do, I do for him. I want him to have the ability pursue his own happiness.”

Currently quarantining at his home in Idaho, Oberst is training for the 2020 World’s Strongest Man competition in November in Florida. The competition was scheduled for May, but it had to be postponed due to global health concerns regarding COVID-19.

Known for his iconic scruffy beard and boisterous on-stage personality, Oberst is 6-foot, 7 and ¾ inches and weighs between 400 and 410 pounds. He eats on average of 8,00 calories a day, the average man consumes 2,500 calories to maintain his weight. His daily protein equates to 40 quarter-pound burgers or 800 grams a day.

“In my line of work, I have to be exact about my height and measurements,” he said, laughing.

Growing up in Watsonville, Calif., Oberst never imagined he would have two homes, travel the world, be a business owner and achieve international status as a professional strongman.

One of 10 kids, he remembers his family has electricity only on the weekends when his dad brought home a generator from his work.

“We bounced around a lot when I was a kid,” he said.

When he was in high school, he said his parents split, leaving him to care for a parent. When things got to be too much for him to handle, he moved out and slept under a mail truck parked at the local airport.

“While things were tough, my mom gave me my drive and she believed I could be anything I wanted to be,” he said.

Throughout his life, he participated in athletic activities including football, hockey and skateboarding. He played football at a junior college, then found himself bouncing around until he landed a job working long hours in a backer board factory in Reno.

“It was the worst job especially breathing in the dust,” he said. “When a friend called me to say the football coach at WOU was interested in me playing there, I jumped in my car and drove to Monmouth.”

After playing two years at WOU, Oberst said he had a brief stint playing professional football before deciding he had enough of it and took a job working as a bouncer at a nightclub in California.

“I worked with a bouncer who was obsessed with strongman competitions and that’s all he talked about. He encouraged me to train for Strongman events,” he said. “I didn’t even know what Strongman was until I looked it up on Google.”

It was a seamless transition from football player to strongman for Oberst. He recalls his first log press competition in Australia when Arnold Schwarzenegger showed up. Before his turn, five other men tried to grip the log.

“I knew this was my shot, I had to take this for my buddy, Mike. I remember that I threw it up, and it felt so easy,” he said. “I just held it up over my head and I looked around. I made eye contact with Arnold, threw the thing down and just lost it. Just roared as loud as I could. It was one of the best moments of my life.”

Oberst has dealt with the setbacks in his life by adhering to the lesson he learned on the football field.

“No matter what the situation, the hardship or how tough things got, I always think about what’s my next move,” he said. “In football, I was taught not to dwell on what went wrong but instead to plan what I need to do next.”

About three years ago at competition in Africa, Oberst ripped his bicep in half, and a doctor told him he was done competing.

“I remember sitting out by this river, just like bawling my eyes out, thinking I missed my opportunity. I fell all the way back down and fought my way back,” he said.

Oberst recently starred in “The Strongest Man in History” on the History Channel, along with professional strongmen Nick Best, Eddie Hall and Brian Shaw. He also appeared in many commercials including for Subway and Planet Fitness and in the movie, “The Hunger Games.”

A history major at WOU, Oberst shared he finds the history of strength to be awesome. “You look back at the Scots, who weren’t allowed to have weapons, so they would train with stones and sticks,” he said. “Strength is something that has captivated people since the very beginning. Socrates said that no man should ever grow old not having known the full strength and power of his own body.”

Oberst plans to compete in strongman competitions for a few more years. He’s already working on his next careers, including a comedy show and assisting nonprofits benefiting children.

His advice for WOU students and others is to always be thinking, “What’s my next play.”

“It doesn’t matter where you come from. Everyone starts at zero,” he said. “Where you go, depends on how hard you work, and how you do anything is how you do everything.”