By Aaron Kunkler at the Issaquah Reporter 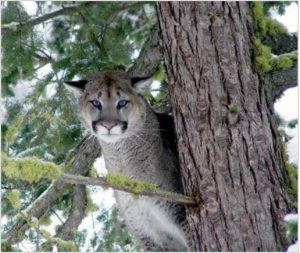 Hunters in some areas of Washington state will be able to hunt more cougars after Washington Fish and Wildlife commissioners voted last month to increase limits in 19 areas.

The new guidelines will allow more cougars to be hunted in several areas of the state. The goal of the changes was to increase hunter opportunity. Washington state Department of Fish and Wildlife game division manager Anis Aoude said there has been more interactions with people in some areas of the state.

“We had public comment from folks saying that there should be more hunting opportunities in those areas because they’re seeing lots of cougars,” Aoude said.

The state doesn’t manage cougars to reduce their population, but to manage surplus. They look at the intended rate of growth and base harvest guidelines on them to keep the population stable.

The decision has caused concern for Debra Chase, CEO of the Mountain Lion Foundation. The organization works to promote cougar population health across the U.S., and Chase said she’s opposed to hunting the animals.

Part of that is an interest in preserving cougars, and another is helping to keep other populations in check.

“As a keystone species, the cougar supports a myriad of life underneath it,” Chase said.

Cougars help thin the ranks of deer populations. As an opportunistic predator, it often goes for sick or old animals.

Chase is also concerned that interaction with humans could increase if cougars are over-hunted. She pointed to a recent paper written by John Laundre, of Western Oregon University.

The paper surveyed state and federal wildlife agency documents, and found “no evidence that sport hunting of pumas has produced the management outcomes sought by wildlife managers aside from providing a sport hunting opportunity.”

It said it’s unknown whether hunting cougars increases the number of deer. It further said several studies suggest that hunting increases the rate of cougar interactions with people and livestock. As evidence, it said higher kill rates for cougars coincided with higher numbers of these interactions in Washington and Utah, where data was available.

Still the risk of a cougar attack is extremely low, with about two reported per year across the 15 states where they’re found in the U.S.

Aoude, with Fish and Wildlife, said he was aware of some papers that looked at these issues, but wasn’t aware of any studies that showed causation.