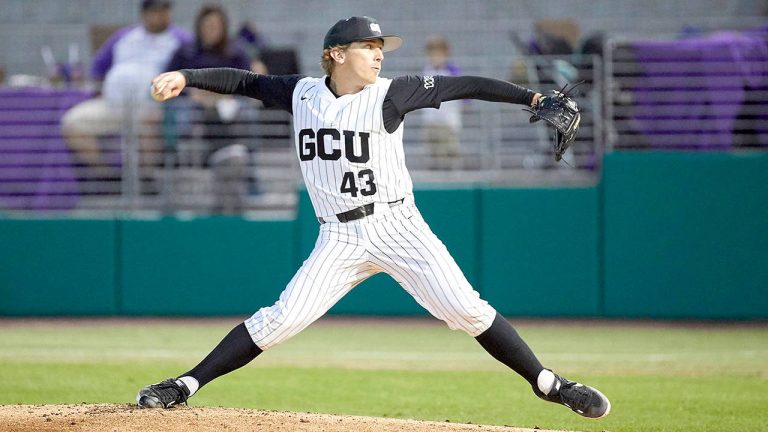 By Pierre LaBossiere at the Peninsula Daily News

PORTLAND, Ore. — Kade Mechals, who pitched for the Port Angeles Lefties in 2018, was selected by the Chicago White Sox in the fourth round of the Major League Baseball draft.

Mechals, a McMinnville, Ore., high school graduate, has pitched for Skagit Valley College and Western Oregon University in Monmouth, Ore. He pitched for the West Coast League’s Kelowna Falcons in 2016 and 2017 and the Lefties in 2018. In four innings for the Lefties, he struck out eight batters and allowed two hits.

Mechals was drafted in the 40th round last year by the Miami Marlins but he didn’t sign and re-entered the draft this year to pitch at Grand Canyon University in Arizona, getting selected much higher in the fourth round. He allowed just a .189 batting average at Grand Canyon.

Four other WCL alums were also selected in the draft Thursday and Friday. Garrett Mitchell was selected with the 20th overall pick in the first round by the Milwaukee Brewers. Mitchell, a UCLA outfielder, played for the Walla Walla Sweets in 2017.

Holden Power, also of UCLA, was taken in the third round by the Washington Nationals with the 94th overall pick. Powell pitched for the Bellingham Bells in 2017.

The University of Hawaii’s Jeremy Wu-Yelland, a Spokane native, pitched for the Wenatchee AppleSox in 2018. He was picked in the fourth round by the Boston Red Sox.

The Seattle Mariners picked Taylor Collard from Cal Poly-San Luis Obispo. Dollard went 6-0 with a 1.92 ERA for Yakima Valley in 2017.

There were only five draft rounds this year, greatly reduced from the draft’s normal 40 rounds, so a number of other WCL alum are expected to be signing professional contracts as non-drafted free agents.