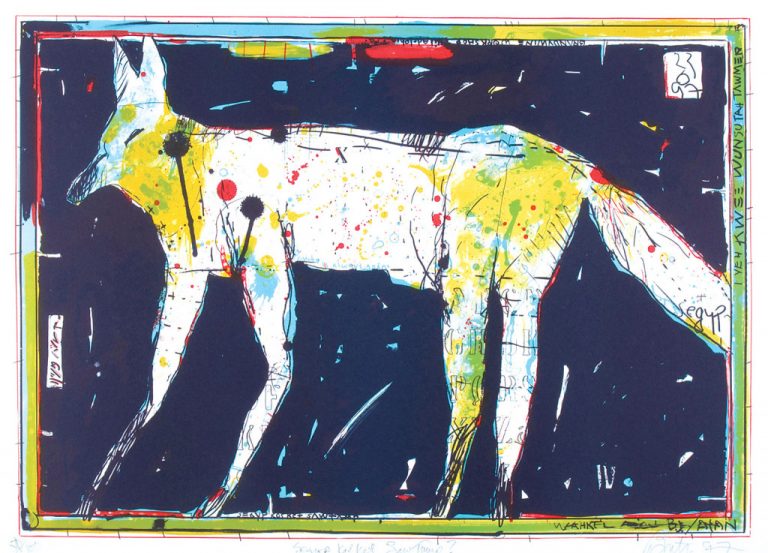 By the Newport News Times

The creative work of Rick Bartow (1946-2016) — one of Oregon’s most well-known artists — is now included in the Oregon Coast Online Art Show, presented by the Oregon Coast Council for the Arts and the Newport Visual Arts Center.

“Rick Bartow had a great commitment to the Newport community and artists in the region,” said Karen Murphy, a trustee with the Bartow estate. “This new online format is the type of project that Rick would certainly support.”

“Having an original Bartow lithograph in the Oregon Coast Online Art Show lifts the prestige for all the artists in the show,” said OCCA VAC Director Tom Webb.

Bartow lived and worked in Newport. In 1969, he graduated from Western Oregon State College with a bachelor’s degree in secondary art education. He was a Vietnam veteran, a life-long musician and songwriter, a widower, an enrolled member of the Mad River Band of Wiyot Indians and is considered one of the most important leaders in contemporary Native American art. His art is held in more than 100 public collections and was subject of over 100 solo exhibitions at museums and galleries, including the retrospective “Things You Know But Cannot Explain,” organized by the Jordan Schnitzer Museum of Art at the University of Oregon in collaboration with the Froelick Gallery in Portland. The Froelick Gallery has represented Rick since we opened in 1995 and continues to represent his estate.

The Bartow work included in the Oregon Coast Online Show is titled, “Segyp, Kos Ket Saw Temp?” (Yurok for “Coyote Where Are You Going?”). It is an offset lithograph/five colors, created at the Brandywine Workshop. The work’s size is 53.34” x 73.66,” and print 81 of 100 is available for $1,800. Nine additional prints are available as each one sells.

“We are showing one of Bartow’s coyote pieces that asks ‘Where are you going?’” Murphy said. “Coyote is the trickster, the magician, the teacher. His tales offer us lessons in making mistakes and the gifts in unexpected outcomes. Segyp reminds us we are the ones we’ve been waiting for.”

The Oregon Coast Online Art Show was created by OCCA in response to the COVID pandemic, when most galleries, museums and art spaces are shuttered to the public, and artists don’t have the opportunity to show or sell their work. To date, the exhibit has generated in over $4,200 in sales since going live on May 29. The exhibit will remain open through Labor Day.

The Oregon Coast Council for the Arts manages the Newport Visual Arts Center and the Newport Performing Arts Center for the City of Newport, and serves as the regional arts council for Oregon’s seven coastal counties.