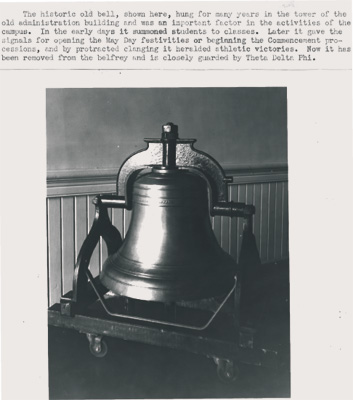 Ever wonder about the history of the bell at Western Oregon University’s Werner University Center? Here are six fun facts:

The text on the image above the bell reads: “The historic old bell, shown here, hung for many years in the tower of the old administration building and was an important factor in the activities of campus. In the early days it summoned students to classes. Later it gave the signals for opening the May Day festivities or beginning the Commencement processions, and by protracted clanging it heralded athletic victories. Now it has been removed from the belfrey and is closely guarded by Theta Delta Phi.”