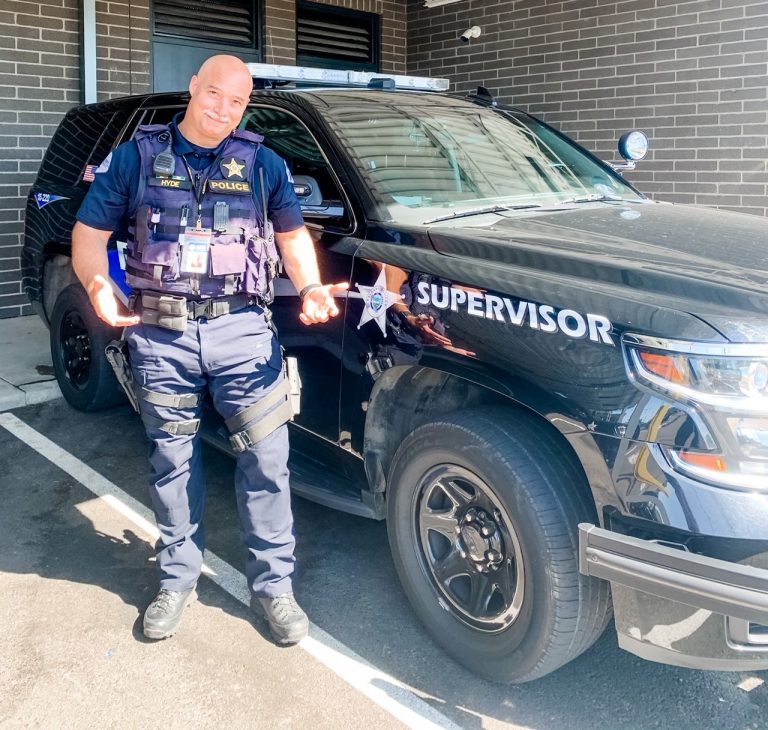 Sitting at a table, Western Oregon University alumnus Albany Police Lt. Curtis Hyde ’93 is reviewing paperwork when a colleague walks up to him and then uses a Clorox wipe to clean his bald head. Hyde gives his colleague a quizzical glance while another colleague stifles his laughter.

Hyde and his two colleagues joined others in the Albany Police Department to create a TikTok video using Britney Spear’s song “Toxic” to emphasize the importance of hand-washing. It’s one of more than a dozen videos to positively communicate the department’s values and priorities with the Albany community, especially the younger audience.

Hyde said he volunteers to be in the videos because he believes it is important to show the human side of police officers.

“We rarely get a chance to share our true, fun side with the public,” Hyde said. “I think this is good for our relationship with people of all ages.”

TikTok is a social network where people can create short videos of themselves lip-synching, singing, dancing or talking. The Albany Police Department ranks first in U.S. police departments on TikTok with more than 252,000 followers and nearly 2 million likes. To put this in perspective, the Los Angeles Police Department has 21,900 followers in a city of 4 million people. Albany’s population is 53,000.

Albany Police Department Crime Prevention Specialist Laura Hawkins said Hyde is always eager to volunteer to be in a video. She and Hyde have known each other since their freshman year of high school.

“He understands what we are trying to do as an organization. He comprehends the concept of humanizing the badge and isn’t afraid to look silly,” Hawkins said, adding Hyde is also a closet TikTok fan.

A tradition in law enforcement

Hyde, 49, decided to attend WOU for its Criminal Justice program and to play football. His father was a police officer with the Albany Police Department.

“I have been around law enforcement all my life and thought it was the right choice for me. I wanted to be part of something with a greater purpose and to stand up for those who can’t stand up for themselves,” Hyde said.

He did his practicum with the Albany Police Department his senior year at WOU. “Shortly after graduating, I was able to place high enough on the hiring list for Albany, and I only had to wait a few months before being hired after graduating,” he said. “I graduated in December of 1993 and was hired Feb. 28, 1994. I have worked with this department ever since.”

Hyde encourages WOU students who are considering working in law enforcement to make sure that it is the right job for them by learning as much as they can about the actual job. “There are several people who don’t make it for many different reasons. This job takes a toll on a person both physically and mentally,” he said. “A person needs to understand this and have the ability to deal with the everyday stressors that come with the job. Communication is the key. A person who can talk with others is useful in this line of work.”

Hyde said law enforcement professionals are responsible for enforcing laws, regulation and rules which tend to focus on the negative aspects of human behaviors.

“Dealing with tragic events daily can sometimes numb an officer’s impression of the world. It can also have a negative impact on a citizen’s view of police,” Hyde said. “What I like about TikTok is that it allows us to share our true nature with the public as well as send out positive messages. It is also relatively easy to do and does not take much time to orchestrate.”

TikTok has a feature called “Beauty Mode,” where someone looks normal until they turn on the beauty mode feature to appear dressed up. In the department’s “Beauty Mode video,” Hyde puts a twist on the norm. He thought it would be funny to mix up the predictable beauty mode video with a female officer and then switch to a male.

“I chose to be in the video because I am a complete contrast from Officer Gina Bell, who participated in it with me. I don’t think the video would have been quite the same if a handsome male officer with hair would have participated,” Hyde said.

Hyde said his department’s positive social media posts hopefully show their community members that the department is there to support them.

“In my opinion, now is not the time to try and prove we are a great police department but to hope we already have made a worthwhile impression,” he said.

https://vm.tiktok.com/Tqe9La/ (Hyde is the one getting his bald head wiped down.)

https://vm.tiktok.com/TVThhA/ (alum is the second floor)