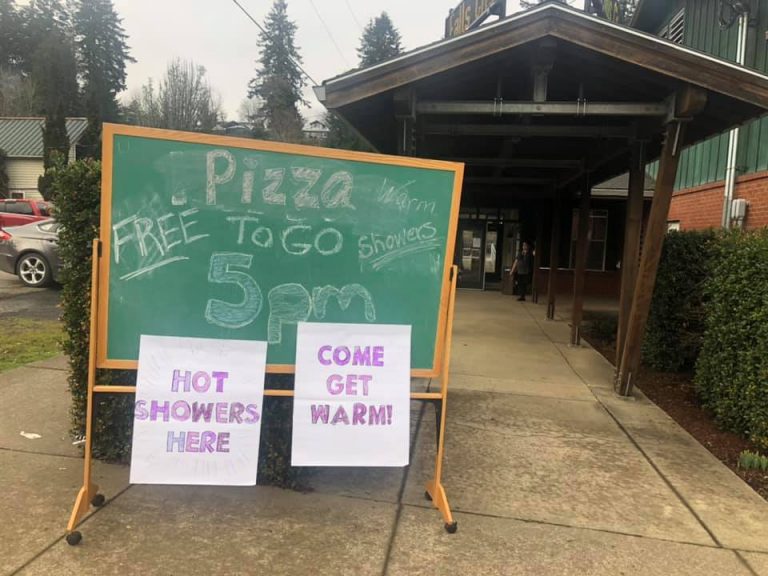 During the February ice storm and subsequent power outages in local areas, Dr. Dana Schowalter helped create a pop-up soup kitchen in the Falls City Community Center. Her collaborators were WOU alumni Lynn Bailey and TJ Bailey, WOU student parent Amy Houghtaling, as well as Jami Kidd and Donna Creekmore. For two days while serving their community, and four days preceding the project, these volunteers did not have power at their own homes. Schowalter took time to explain the context and details of the soup kitchen.

Who initiated the idea to create a pop-up soup kitchen?

A few days into the power outage, and once we realized the power was going to be out for quite some time, Lynn Bailey and I had a brief conversation about whether it would be helpful to have a community meal for people in need. After some asking around, we decided it would be a good idea, and decided to make large batches of soup for a take-out style, COVID-friendly meal. Because the power was out and communication was difficult, we rolled a large chalkboard outside the community center that just said, “Free Soup, 5pm.” We had no idea who or how many would show up. It was a real “If you make it, they will come” moment.

What was the process of creating the kitchen and warming center?

Lynn and I organize and cook an annual Thanksgiving meal that draws several hundred people from our area, so thankfully we had a good idea of what we would need and how to scale up for a large meal. We also managed to do so during COVID, so we were well-versed in how to hold an event of this kind while maintaining health guidelines during the pandemic. We were so thankful for that experience, because it made this a fairly whimsical process for us, without requiring so much advanced health planning. 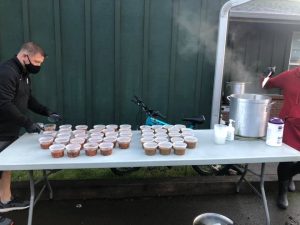 The Falls City Community Center had power, though the rest of the community did not. So, we just commandeered the community center kitchen and got to work. The first night, we made four different kinds of soup using food from our own refrigerators that was going to go bad due to lack of power. Between the three of us cooking, we had enough spare food to put together tasty meals for a variety of dietary restrictions. We ended up serving approximately 130 people.

The next day, we secured a donation from my mom (thanks mom!) to serve pizza, and we also let people know they could use the community center during the day to stay warm and take showers, if needed. We had a pretty steady stream of people take advantage (ourselves included, since we were all still without power in our own homes). We also put out a message on Facebook encouraging our friends to donate, and we received enough donations to do the same thing for a third night.

How long did you keep the facilities up, and how many local residents did you aid in that time?

We served dinners for three nights. We got power on at our own homes after the second night’s dinner, but decided to continue serving food for a third night because we knew not everyone in town was so lucky. Also, those with power had to throw away most of their food, so having a hot meal already prepared eased the burden for folks whose refrigerators were suddenly empty. We served 130 people the first night, and we served approximately 100 people the next two nights.

How would you suggest other members of WOU get started serving their communities during times of need?

Once the power company estimated that it would still be several days before power would be restored, we saw a need and just stepped up and helped. So, my advice would be that when there is a chance to help, just step up and help. I know it isn’t always that simple, but sometimes it is.

So often people wait for others to organize and plan, or they wait for people to ask them to be involved. Or we also make excuses. At first, I thought about my own family’s needs, especially how I could explain our circumstances to my four-year-old and how I could ensure that my own family stayed fed and warm. Certainly, in that moment of crisis, we all felt rather helpless and consumed with our own safety.

But one thing I love about Falls City is that people always go out of their way to help. And when I talk to people from other places about why I love Falls City, the real community-minded, helping each other mentality is one thing that impresses them. That feeling isn’t something that just happens. It exists because people make it that way. People step up and help each other, even if they weren’t asked specifically to do so. They see a need and they do whatever they can to make it better. So, my advice would be to do that, in big ways and in small ways, to make life easier for each other whenever you can.

And I’ll also say that helping made me feel a sense of purpose in an otherwise very difficult time. Parenting a young child and working from home during the pandemic, distanced from my students and our friends and living far away from our family in Wisconsin, has been difficult to say the least. Adding a nearly week-long power outage made it significantly more difficult. But we were able to help people, and we got to connect with other people in our community who were also suffering. We also got to see that we were making a difference–we could see and hear that people were grateful for that brief moment of comfort. So, stepping up was also just good for my soul.