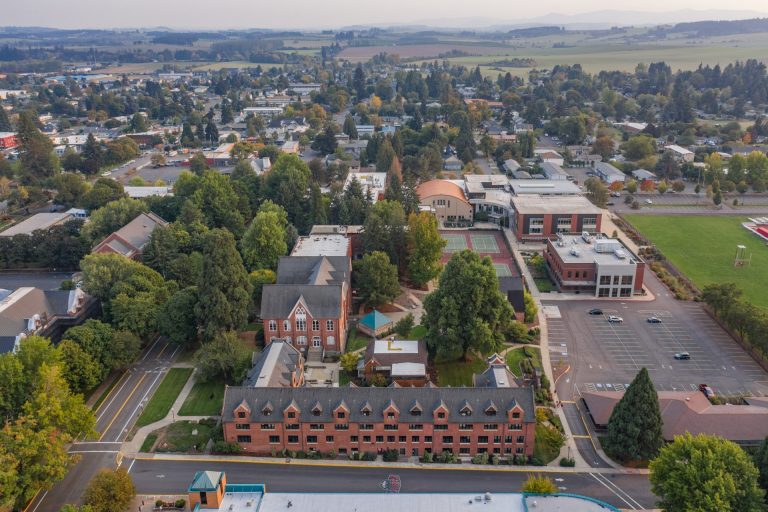 Recently, we had the opportunity to speak with student Quentin Kanta ‘23 about a peer-reviewed paper he co-wrote with visiting assistant professor in the Sociology Department, Dr. Evan Shenkin. Soon, the paper will be published in the United Nations Encyclopedia of Sustainable Development. Kanta, a Political Science major and Social Science minor from Grants Pass, let us know more about the paper, as well as his experience with Model UN and various leadership roles around campus. Check out his answers below.

The eight Millennium Development Goals (MDGs) were the predecessor to the United Nations’ current Sustainable Development Goals (SDGs), which target international problems like extreme global poverty, lack of universal education and clean water access, child labor, and other crises. Our paper focuses on the inability of the SDGs to effectively tackle global wealth inequality, from which extreme poverty flows. Dr. Shenkin and I address the ideological motivations behind development-based goals to eradicate poverty and how they often fall short in lessening the severity and cloaking the causes of poverty. I would say that the main idea of our paper is that poverty is a political choice, and that the responsibility for global poverty extends well beyond local government and personal choices.

What was the development process of this paper like?

I was taking SOC 340 (Community Organizing) with Dr. Shenkin during Fall term, my first class with him. We pretty instantly hit it off in class chatting about politics and our organizing philosophies, so he reached out and asked me if I would be interested in writing a paper with him about the SDGs. Having a background in Model United Nations (I was on WOU’s team my first year), I already had a baseline knowledge of the goals and their lackluster success. Piecing together the paper came really naturally because of our shared politics and the fact that both of us had researched and written about the United Nations in the past. We met over Zoom during winter break to consolidate our ideas and assign sections of the paper, and it’s one of the best writing experiences that I’ve ever had. I’ve always considered myself an okay-to-good writer, but I think that working on this with Dr. Shenkin really helped me internalize that feeling, and I’m a much more confident writer after this experience.

Congratulations on this paper’s upcoming publication through Springer Publishing! How rewarding is to have your paper published?

Thank you! I remember submitting a paper that I wrote for HST 457 last year (20th century Latin American history) on the violent introduction of neoliberal economics to El Salvador in the early 1980s for publication in WOU’s Digital Commons, and the excitement that I felt when it was accepted. Writing this paper and getting acceptance from the publisher was that feeling tenfold. It’s always been a dream of mine to publish at some point in my life, but I never saw it happening during just my second year of university. Some of my personal heroes are academics, so it’s really cool to be able to say that I share something in common with them: I’m a published author in an academic journal. It’s also been great to be able to spend time with Dr. Shenkin outside of class and get to know each other better. Writing with someone else is such a different experience, but he is so understanding and cooperative, and I think that the two of us worked together really well. I look forward to future writing opportunities with him.

I was an avid competitor on the speech and debate circuit in high school, really embracing it as the first thing that I had ever excelled at. Debate is actually why I chose WOU; the OSAA Speech and Debate State Championships are held at Western every April, so I had an intimate familiarity with campus without ever taking a tour. While Western doesn’t have a competitive debate team, Model UN was the next closest thing so I was eager to jump back into competitive public speaking. Though there were many other students on the team with similar backgrounds in debate, I found that the experience was wholly different, and while I enjoyed the research and writing aspects, the experience was different enough that I chose not to return to the team this year during a time of virtual conferences due to COVID-19. That being said, my time on the team certainly enhanced my research skills and provided me with the necessary background knowledge to be able to write this paper with Dr. Shenkin.

I am also a member on the Incidental Fee Committee, which has been the honor of a lifetime during this past year which has been marked by layoffs and assaults to budgets across campus. I feel a sense of duty and responsibility each week when I attack the assumptions made by certain members of this administration that the best way to fix WOU’s financial situation is laying off faculty and staff members, cutting entire academic programs, and continuing to shift the cost burden of higher education onto students, collectively known as Article 15. As a student leader, I’m proud to fight for my department and others on campus. My time on the committee hasn’t been without its frustrations, but it has become a central part of my life and I think that I’m leaving Western Oregon University better than I found it.

Congratulations to both Quentin Kanta and Dr. Shenkin for this accomplishment, and be sure to keep an eye out for their upcoming publication in the United Nations Encyclopedia of Sustainable Development, through Springer Publishing.