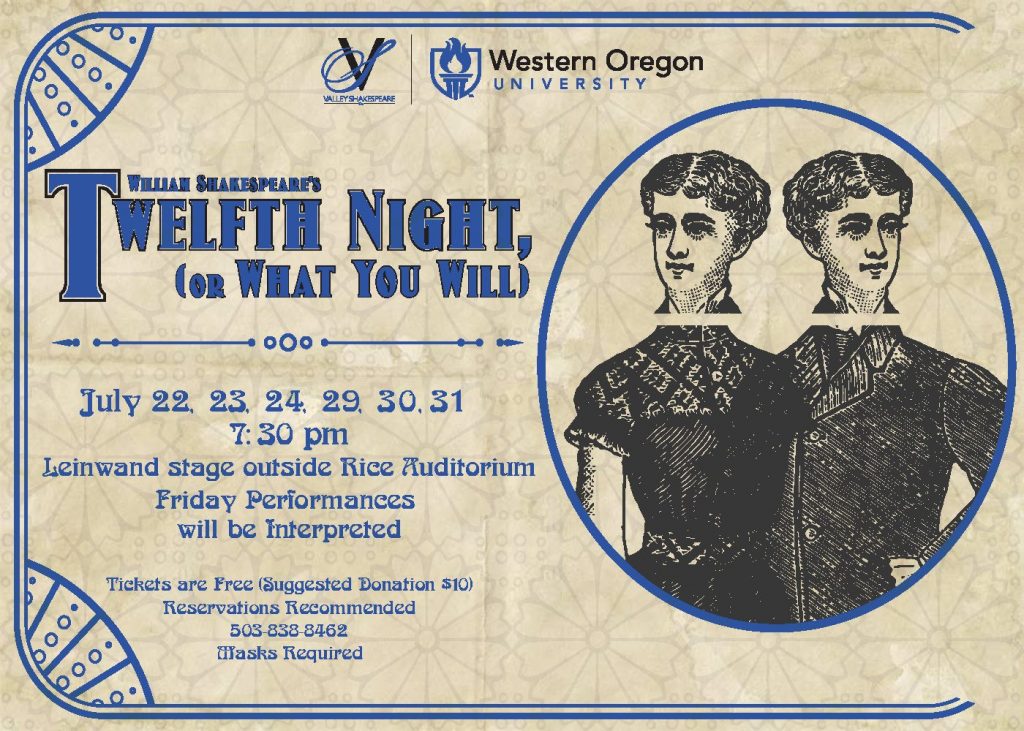 The Valley Shakespeare Company at Western Oregon University (WOU) will present Twelfth Night (or What You Will), one of Shakespeare’s most popular comedies, on the Leinwand outdoor stage at WOU for a limited live audience. Performances will be held at 7:30 p.m. nightly July 22-24 and July 29-31. The Friday performances will be interpreted in American Sign Language.

Uproarious shenanigans, gender-bending disguises, ill-fated desires. The fun is all too close to home in one of Shakespeare’s most noted comedies, where stumbling romance and misunderstanding are in full bloom. Separated from her twin brother after a shipwreck in Illyria, Viola disguises herself as a man to work in the local household of Duke Orsino. The closer they become, the more Viola gets acquainted with Orsino’s crush, the beautiful noblewoman Olivia. Much to their dismay, the trio is inevitably thrust into a love triangle of mistaken identity and wanton foolishness. Director David Janowiak, WOU theatre professor and chair of the Creative Arts Division, will be resetting this classic tale of love and misunderstanding on the Atlantic City Boardwalk during the 1930’s.

The Leinwand stage is located outside of Rice Auditorium on campus. Seating will be divided into socially distanced areas that can accommodate up to five people each. Masks are required. Audience members are invited to bring low lawn chairs and blankets. Reservations are recommended, but unreserved seats will be available until the time the show begins each night. To reserve tickets, contact the WOU Box Office at 503-838-8462 (open 10 a.m. to 4 p.m., Monday through Friday). Performances are free and open to the public. There is a suggested donation of $10 per person. The running time of the show is approximately two hours and twenty minutes with one intermission.