The Mario and Alma Pastega Award for Excellence in Scholarship honors a full-time faculty member who demonstrates outstanding creative or scholarly accomplishments. After nominees are received, the Honors Committee votes by secret ballot on whether there will be a recipient that year, and if so, whom the recipient will be. 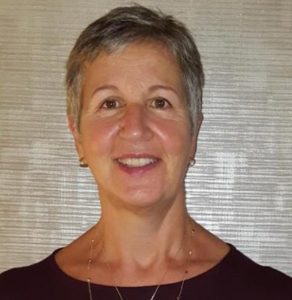 The Mario and Alma Pastega Award for Scholarship recognizes an educator’s career-long scholarship and the effect the scholarship has on their field of study. This year’s winner, English Studies Professor Cornelia Paraskevas, fits the bill perfectly; she has had multiple books published and has contributed greatly to research in her area of expertise. But in talking to the linguistics and writing specialist, it quickly becomes clear that her 30-plus years at WOU have been equally about being a consumer of scholarship as much as being a producer of it.

“I still remain very curious,” she says. “I’ve constantly asked a lot of questions, and I’ve been very fortunate that, when I am brave and ask questions, people are happy to have an exchange. That has helped me a lot.”

When she got arrived at WOU with a doctorate in theoretical linguistics, she found that that academic focus didn’t match what students needed to learn in order to become English teachers; most of her students were Teacher Education majors. So, she had to figure out “How do I make myself useful to my students? How to I give them knowledge that is useful for them for what they are going to do, rather than what I wanted to teach?”

Paraskevas sought help from colleague Tom Rand, who arrived at WOU at the same time and whose office was next door. She recalls darkening his doorstep just about every day.

Eventually, she identified an intersection between linguistics and writing that allowed her to develop courses that met the needs of students. Then she was off to the races, creating classes such as Linguistics 450, called Register, Style and Genre. But that endeavor also required a lot of learning for Paraskevas.

“I wanted to see how practicing teachers talk about language in their classes and how they evaluate work,” she recalled. “So I called the Oregon Department of Education, and I asked if I could come and get training to score the Oregon writing assessment that they used to do the writing samples. I wanted to see how teachers scored and really what was beneath the surface, how much they actually considered language issues, and in what ways they considered them. So that shaped a lot of the [original] Linguistics 450 class.”

She also created a class, Linguistics 209, for students majoring in early childhood studies. That course, too, sent her on a new journey of discovery.

“I had to learn to beef up on language acquisition, and then as I started reading more about language acquisition, I ran across a talk about teaching writing to children in kindergarten and earlier,” she explained. “They don’t write, but they could draw, so how do you use those as storytelling? The class was taught only once. But, like so many other things in my work, someone asked me a question and it prompted my curiosity.”

Most recently, this quest for knowledge led her to best practices for online learning and grading, which were required as the university moved to all-online teaching during the pandemic. She spent the summer of 2019 reading about the topic, and about contract grading and specifications grading. Eventually, she was able to parlay what she devised into two published pieces. Then there is the new OER textbook she created for Linguistics 310, which allowed her to replace a resource that was cost-prohibitive for students. “Again, there always been some kind of a stimulus, some kind of nudge from some place. And I’m still doing that.”

Paraskevas’ colleagues, too, appreciate the love for knowledge she has shared with them. Dr. Deborah Dean, a professor at BYU, said in a letter of support for Paraskevas: “Cornelia has shown warmth and encouragement to newer scholars, encouraging and influencing us to continue our growth as professionals. Her influence is felt through the people she has mentored, as well as in the works she has had published.”

Her learning will likely never come to an end, but Paraskevas’ time at WOU eventually will. She is near retirement age, and she’s ready to join her husband, who retired last year.

“I realized early on that a Ph.D. is the beginning of scholarship, not the end,” she said.

One comment on “Mario and Alma Pastega Award for Excellence in Scholarship: Dr. Cornelia Paraskevas”