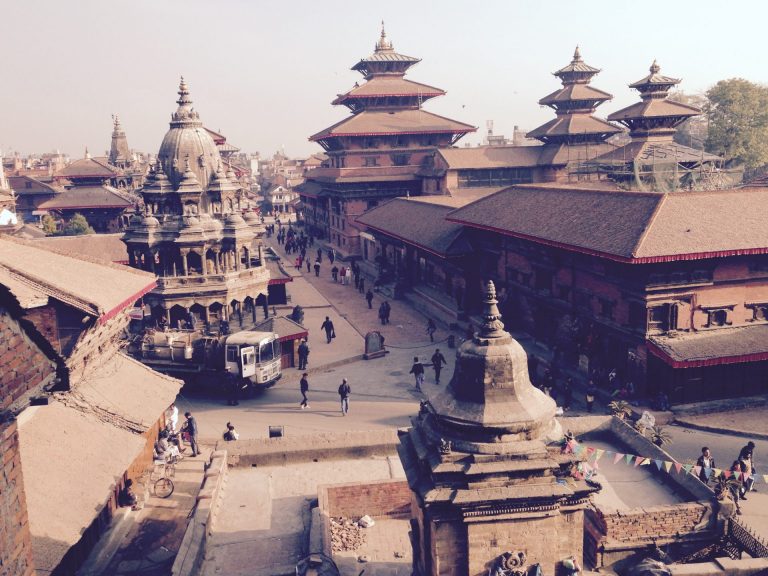 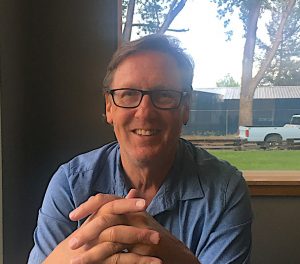 Dr. David Hargreaves has been a professor of linguistics here at WOU since 1998. He has recently published a collection of original poems, titled Running Out of Words for Afterwards. I had the pleasure of interviewing him about this new book, and how it was inspired by his experiences studying the Nepal Bhasa language in Nepal.

Q: I’ve read in your bio that you once translated a poetry collection titled The Blossoms of Sixty-Four Sunsets by Nepal Bhasa (Newāh) poet Durga Lal Shrestha. What’s the story behind that? Were you in Nepal?

A: One of the things you do as a graduate student in linguistics is you take a field methods class. You simulate what it’s like to be in the field, learning a language that has never been documented before. Obviously, the native speakers know their own language, but they normally can’t tell you anything about the grammar; they just know how to speak it. So I got connected with speakers of a language called Newari, or Nepal Bhasa (is the name they prefer). And since the mid 80s, I’ve been traveling back and forth to Nepal staying there, studying the language. It’s a minority language in Nepal, nowadays, it’s endangered, meaning each generation there’s fewer and fewer children learning it, because they’re influenced by the larger national language, and English. So it’s important to document it.

My Ph.D. research was not translating. It was really a documentation of some of the characteristics of the language that made it interesting in terms of comparing it with other languages of the world – sort of what linguists do professionally.

I happened to stumble across a collection of this poet, Durga Lal Shrestha. I started to read one of the first poems, and I was like, “this is really interesting, from the point of view of how poetry works. This guy is a really interesting and talented poet.” I thought, well, I should try and translate a couple of poems.

At that point, I’d never met him, but I found someone who knew someone who knew him. So we got together with some other people since he didn’t speak English, and they asked me to read my translations. A couple of the people who were there were poets themselves, and their English was good enough that they could recognize: “Wow, these are really good English translations of his poems.”

Translations of his poetry in the past had been done by Newars, who were obviously fluent in the language, but having studied English in a British colonial context, the way they were translating him made him sound like he was a Victorian poet or something, which was totally inappropriate for his poems. He didn’t sound like that at all. When I translated his poems into colloquial American English of the type that you find in modern American poems, they went, “Oh, this is great. You want to do the whole book?” And I said, “Well, okay.” It took many years. I mean, it took several trips back and forth to Nepal, emailing back and forth, getting revisions back and forth. It was a long process, but it was really rewarding in the end.

Q: How has the process of translating The Blossoms of Sixty-Four Sunsets influenced the creation of your own collection?

A:  How I got interested in poetry, and became more serious about writing poetry, was through the translation. I asked myself…if I’m going to translate this, what kind of English poetry is most like the poetry of this poet in this language? And so for many many years I just read massively in English language poetry, both old and new, and international poetry from all over the world just to get a feel for what’s the right kind of style and voice that would be the most accurate for translating into English. Along the way, I started feeling my own voice emerging, so then I just started writing poems, putting them together and keeping them and starting to see themes develop. That’s how a book of poems comes together. You start to see in your writing, there are themes that come over and over again.

Q: What are those themes that appear in Running Out of Words for Afterwards?

A: One is the limits of language, or the difficulties of having your experiences be reflected in language. Also, having lived in Nepal and interacted with people there for many years and having read a lot of Buddhist writings, you start to get this sense of a few concepts that are just so fundamental that I really find intuitively appealing. It’s the idea that our personality or the self, who we imagine ourselves to be, is really an illusion. We are fixed on this idea of being a person, an individual, but that it’s really a kind of an illusion. You’re a different person today than you were a year ago. This ‘essence’ of you, the unique individual, with all your thoughts, beliefs and desires, is transitory, an illusion. And then you die, and you’re nothing. There’s a lot of poems that explore that in different sorts of ways, so the illusion of the self or the illusion of identity is a major theme in a lot of the poems.

Q: What advice would you give to prospective writers about the publication process?

A: Basically, be prepared to be rejected over and over again. I mean, because you can submit manuscripts online, poetry journals get flooded with thousands of poems a month from very experienced poets to some pretty inexperienced poets. They have to sift through all of this, month by month, to try and come up with what they want to publish. So, you’re part of what they call the “slush pile.

It’s easy to get published in the sense that you can publish yourself online anytime you want to, but it’s really hard to get recognized at a higher level that you would want to be recognized professionally. I had my manuscript rejected probably fifty, sixty times over four, five, six years, and then I’d revise it and I’d get some more feedback from people. Eventually Broadstone Books read it and they said, “we want to publish it.” Just be prepared to be rejected over and over again and don’t be discouraged. But also, be objective and critical about your own work and what you can do to make it better.

Q: What classes do you teach here at WOU?

A: I teach a course on semantics called Meaning and Context. I’ve taught courses on style and poetics. And then I teach courses that are often taken by education majors. There’s one called Linguistics 314, which is language study for early childhood elementary teachers. The bread and butter for me is Introduction to Linguistics and Language Study for Early Child Elementary Teachers. Those are the mainstays of my teaching. The Linguistics program also has a Teaching English as a Foreign Language certificate program. I was involved in getting that certificate up and running, and I sometimes teach courses that are related to the TEFL program.

A: I like the fact that we have such small classes and that I can really interact with students, pre-COVID, of course. Things are all different now and certainly not as enjoyable as it was in the past. It’s kind of frustrating. But I know faculty that teach at other universities, both private and big public universities, and the idea that I can interact with classes that are anywhere from 20 to 35 students, compared to giant lectures of 70,100, 200; that’s something special about Western. That’s a real plus.

Q: Do you have any plans for future projects?

A: Well, I’m continuing to write my own stuff. Because of COVID, I haven’t been back [to Nepal]. But if things do open up, and I can go back, then I’ve got some more translation projects that I want to work on, but it’s hard to do it over the internet. I need to be face to face with people so we can talk through poems and talk both in English and in Nepal Bhasa back and forth. That’s the real process. So I’m looking forward to that, if things get better soon.

You can pick up a copy of Running Out of Words for Afterwards from the Hamersly Library, the Book Bin in Salem or Corvallis, or directly from Broadstone Books’ website. I hope to have copies in the WOU Bookstore and other stores around Oregon as well. That’s a part of being a writer that I’m not used to and not very good at; you have to get out and promote your writing.

Hargreaves will be reading from his new collection at the book launch on Thursday, November 11 at 4 pm in the Willamette Room of the Werner University Center.