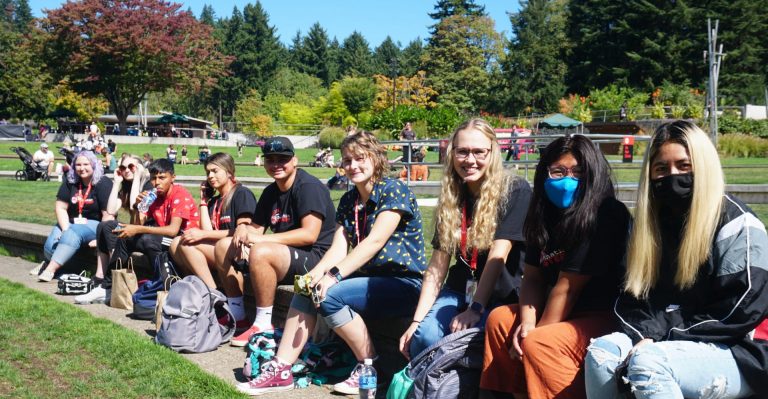 Destination Western (DW) is an all-new two-week residential program that wrapped up prior to the start of the 2021-22 academic year. I had the dual pleasure of not only participating in the program itself, but also interviewing some of the brilliant minds behind it. Megan Habermann is the director of new student and family programs at WOU, and was responsible for the design and management of Destination Western. Dr. Leanne Merrill is an assistant professor of mathematics here at WOU, and was responsible for designing and teaching one of the two classes specifically made for Destination Western. Through the insight of these two professionals, and through recounting my own experiences with the program, I hope to give you an accurate picture of what Destination Western is, and what it means to the people involved.

So what was Destination Western designed to do? Megan Habermann explained to me that the inspiration behind the program was two-fold: “The idea was that students coming into Western that had a rough last couple of years in high school or with remote learning at their community college or another school, or students that were transferring, or matriculating in directly from high school didn’t have the same preparedness as traditionally. They didn’t have the same college prep, they didn’t have as many college visits, there wasn’t the same social and academic preparedness. Math and writing are fundamental to being successful in college, because it’s integrated in basically every single major; almost every class is going to have some version of math or writing. So we wanted to focus on those topics, to help prepare students, and also create social opportunities to help ease students back into socializing. It’s hard to go from high school to college with socializing, even in the best of times, and with this not being the best of times, we wanted to make sure to give people the advantage there.”

I think Megan’s ideas accurately reflected my experience as a first-year student at Destination Western; it’s a very big jump. I had been doing remote learning for over a year before arriving at WOU, so both my in-person classroom skills and my social skills were in need of refreshing. It’s nice to know that the program I attended was designed with students’ needs in mind. 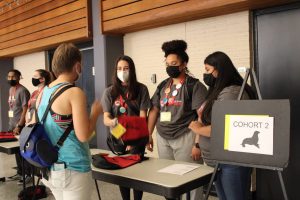 Destination Western is more than just a theory, however. The day-to-day schedule of a DW participant is designed to meet the program’s overall academic and social goals. One of the key features to the structure of DW are cohorts: small groups of around 12 students that spent a lot of time together throughout the program. “I think the cohorts worked really well,” Habermann said. “I think having the small groups created some bonds, and it gave consistency. I think it really helped with the social events and in the classes. In educational theory, time and time again, you learn better that way.” Cohorts were led by three members of the DW Peer Advisor team and would have morning check-ins together before heading off to class.

All students at DW took two classes, titled The Writing Experience and The Math Experience. Those classes were designed to refresh students’ skills in these subjects and get them acclimated to college academic life. Merrill, who designed and taught one section of the Math Experience, was excited to create a curriculum around the needs of first year students. “I have always been very passionate about the first year transition between high school and college. I think it’s a really crucial time for a lot of people. There’s a lot of students who I think make or break depending on what their experiences are, and whether or not they’re connected with the right resources, and whether or not they develop the skills they need. If I can take folks who are feeling unsure about math—people coming in with so much anxiety and belief that they’re not able to do it—and give them any kind of help to say no, actually, you already know a lot of math, college math is different from high school math, so you may like it a little bit more, and here are some resources and some tools that you can use to succeed. I think that that’s really important because I think that’s a pretty common experience for freshmen coming in.” 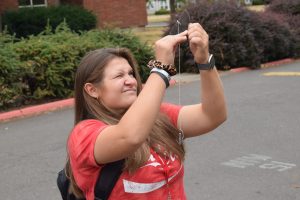 In accordance with the goal of meeting incoming students where they were, the content of these two classes was project-based, rather than assessment-based. In the Writing Experience, we created public service announcements about procrastination, and in the Math Experience, we applied the trigonometry concepts we learned to measure the height of the Ackerman and Heritage halls here on campus. Merrill said this was her favorite moment from the program. “I was seeing people genuinely engaged with mathematics and problem solving, working together and thinking realistically about mathematical questions. That is something I don’t get to see as much if I teach, let’s say algebra, and just give worksheets. It’s a really different experience of mathematics. I texted Megan and I was like, ‘This is the math class I always want to teach.’”

Between classes were mealtimes and breaks that allowed students to work on their assignments, and for students to meet with their professors during office hours. Then, in the evening, there would be a social activity, including but not limited to movie nights, laser tag, arts and crafts, trivia, and more. Later in the program, participants split up to go on excursions that they had selected beforehand, like paintball, hiking, ziplines and painting. These activities certainly helped achieve DW’s goal of giving students opportunities to be social.

While there was some precedent with similar programs in the past, DW was a largely new program, so there were undoubtedly obstacles and challenges to overcome. As director of the program, Habermann was very familiar with such issues: “I think honestly the biggest challenge was all of us coming back from quarantine. Some people literally barely left their homes because faculty have been teaching remotely. It was their first time back on campus in almost two years. One of those unsung things was that University Computing Solutions had to spend two or three days just trying to make sure all the computers would turn on still, because some of them hadn’t been turned on since March 2020!”

Merrill agreed. “I came to have a bigger appreciation for how many aspects of campus go into making sure campus runs smoothly, in one way or another.” Merrill also said that from a teaching standpoint, the mindset shift from a 10-week course to an eight-day bridge program was very important. “Destination Western didn’t have grades. There were tasks that you needed to complete, but there were no exams. The goal was to meet people where they are and support them. Having it in that eight day period, and thinking of it as a totally formative experience, I think, is a difference. It is definitely a different experience, but I was really impressed at how flexible and open-minded the faculty were.”

All this talk of holistic formative experiences sounds good and all, but did Destination Western actually accomplish what it set out to do? “Yes. The early data is showing that it did.” Habermann said. Participants took a survey at the beginning and end of the program about their confidence levels with math and writing. The result? “There was growth in every single section of our survey, usually at 10% or higher, including a roughly 30% increase in confidence and skills in math and writing.”

Habermann also has a hunch that DW helped participants overcome their anxiety and engage with college life. “In the old summer bridge program, [participants] almost inevitably did not attend New Student Week, but we found that Destination Western students were actually some of our most engaged students with New Student Week. Both the top two prize winners were Destination Western participants, and like, a third of the people in the Variety Show were Destination Western students. I think it’s because that barrier of being nervous about where something is, or walking into a space and not knowing anybody was gone for those students.” I certainly think that’s true. If I had not gone to DW, navigating New Student Week would’ve been a very stressful experience.

Finally, DW was also a success in retaining students. Habermann described it this way: “The university does what’s called a Week Four Census. We basically see how many students we have enrolled by week four. And then we compare week four every term to see how many students we’re losing and use that as a retention tool. One-hundred-percent of the Destination Western students were still enrolled by week four, which is actually a miracle. Our institutional research person, Dr. Mike Baltzley did not believe me. He said, ‘there’s no way it’s 100, Megan. Why would you think that?’ I said, ‘I see them around Mike!’ He emailed me back in ten minutes. He said, ‘the suspense was killing me: it was 100%.’ On average, you’re taking almost two credits more than your peers. All those early indicators show higher likelihood of success.” 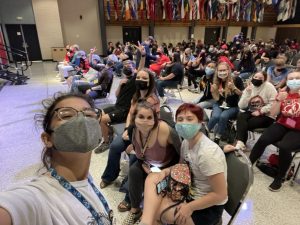 I think Destination Western had a deeper impact than what mere census data can show, however. In a very real way, Destination Western restarted my life. I had spent the last year-and-a-half in remote learning, disassociated from the routine and people I used to define myself by. I was jaded from the changes that occurred, and I was ready to leave it all behind, but I had nowhere else to go. I felt like I was adrift; detached from everything and attached to nothing. Destination Western changed that for me. All at once, it gave me a routine to follow and new friends to follow it with. It gave me things to look forward to and tasks to accomplish. It gave me something to care about for once. I was invested.

Before the program even began, Habermann had a similar insight about such investment. “When I was designing the program, I was creatively inspired by a children’s book. It’s called Bear Came Along. It’s about different characters engaging in an adventure and a new experience, and how the experience impacts the characters, but also how the characters impact the experience, it’s holistic. My daughter just picked this off the shelf at the library. I did not know it existed before. As I was reading it, I started crying. I thought, ‘this is orientation, because the new students make such an imprint on our university, and they don’t even realize that they’re making an imprint because they’re busy being imprinted by the university.”

In other words, the college-to-student relationship is symbiotic; both are investing in the other, feeding off each other’s passion, creating something beautiful. If I could sum up how I felt at Destination Western, I felt invested in. And as such, I would gladly return the favor.