The Mario and Alma Pastega Award for Excellence in Teaching honors a full-time faculty member who demonstrates excellence in teaching and relationships with students, both in and out of the classroom. After nominees are received, a screening committee submits a list of finalists to the president, who then chooses the recipient. 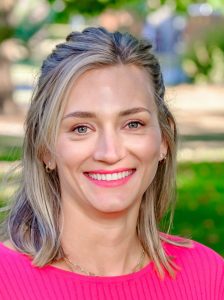 Associate Professor Jaime Cloud, this year’s winner of the Mario and Alma Pastega Award for Excellence in Teaching, is known for bringing her innovative and engaging approach to every classroom she graces, whether the forum is virtual or in real life. Students find her lecture notes, often punctuated by trendy memes and silly sound effects, hold their attention better than more traditional sessions. Her methods earn her high praise from students struggling with complex concepts, such as research statistics.

But Cloud admits her effort to make the subject matter fun and approachable is just as much for her as it is for students.

“Recording lectures is one of my least favorite things to do. I absolutely hate it because I am such a perfectionist,” she said. “But since I realized I can make this fun for me, too, by searching the internet for the perfect meme or the best sound effect to illustrate the point I’m making—and knowing that every time I goof, that’s a blooper cut I can put at the end of the video—that takes so much of the edge off.”

Cloud’s tactics in classes such as evolutionary psychology, research methods and social psychology may be a little unorthodox, but they get the job done. During the eight years she has been teaching, her course evaluations and verbal feedback reflect the extra time she takes to keep things interesting.

“I have gotten a lot of feedback from students who say ‘Oh, my gosh, your bloopers are so funny and relatable’ and ‘Your lectures are so manageable and easy to watch,’ ” she said.

It took Cloud a little while to develop best practices for student engagement. In her early years, teaching at Alabama’s Birmingham-Southern College and then at WOU, she struggled to find the right balance between being authentic and being professorial; after all, she was only a few years older than most of her students and younger than some. Authenticity won out, largely because being professorial is just not in her comfort zone.

“There were non-traditional students in my classes who were older than me. I detected a lot of hostility and suspicion from them,” she recalled. “I tried to be as professorial as I could, but I think in the end the hostility I experienced was because I wasn’t being real. There was no moment where I gave up my façade–it just wore off. I started sharing more about myself, and then the clouds parted.”

These days, Cloud continues to hold herself to a high bar of relatability. She knows what WOU students need to learn effectively, and it just so happens that her personality is a perfect fit for the task.

“It’s so important to be accessible and approachable and make that personal connection with [students] so that they feel comfortable asking for help, swinging by your office hours so you can explain a concept to them again in a different way,” she said. “My students are learning the material and are comfortable in this college environment, so that’s a win for me.”