The Award for Excellence in Service recognizes faculty accomplishment in service, honoring work that engages and inspires students, going beyond the typical scope of faculty service. 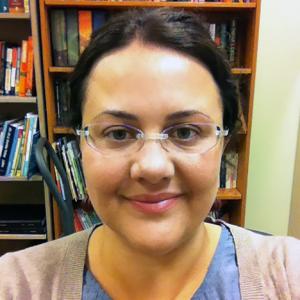 The 2021 Mario and Alma Pastega Award recipient for Excellence in Service, Melanie Landon-Hays, has been told she does too much service on campus, that her many hours spent each week doing committee work are beyond one person’s responsibilities. Landon-Hays, a professor in the College of Education, isn’t having it.

“[I’ve thought about] whether I liked what I was doing and if it gave me joy,” the Idaho native said. “And it did. I really like getting outside of my own division. I like meeting people across campus. I like conversations about the big picture, you know, and so service allows me to do that.”

When pressed, Landon-Hays can list many of the committees she serves on and important roles she plays on campus. She’s on the executive council of the (faculty) union and a faculty senate executive, posts that blossom into obligations on multiple other committees. She’s also the chair of the Graduate Studies Committee and coordinates the Master of Arts in Teaching program.

She is happy to share the wealth, though, and wants other faculty members to know that WOU is not a place where they have to get tenure before they are allowed to speak up about important issues.

“I think I’ve done a good job of trying to reach out to new faculty and helping them to know that you don’t have to wait until you’ve been here for decades before you can serve,” she explained. “You can be new and ask questions, and no one’s going to make you feel like you don’t know anything or that you shouldn’t speak up.”

Her colleagues are deeply appreciative of the work she has done during the past several years, as shown in the letters of support submitted in along with her nomination for the Pastega award. They tout not only the hard work and action-oriented approach Landon-Hays exhibits, but also the supportive and caring human being she is.

“The kindness extended by Dr. Landon-Hays reminds me that we are more than just cogs in a wheel trying to keep an institution running but can be a community of caring individuals,” wrote Associate Professor of Criminal Justice Misty Weitzel. “It is not hyperbole to say that Dr. Landon-Hays will leave an indelible mark in all of the areas in which she has served.”

In the end, Landon-Hays believes she learns important lessons about herself through her extensive service roles, especially her capacity for leadership, which she appreciates greatly. She’s also learned a lot about the university and its mission.

“A big part of what I’ve learned is just how much everybody at Western really does have students’ best interests in mind,” she said. “And the talents of the people that work here are vast. It’s a safe and a good community.”

Still, she would love it if others were empowered to serve in order to make WOU and its students as successful as they can be. Part of that goal is casting service to the campus community as gratifying, a topic she discusses with—you guessed it—another committee, this one called “the committee on committees.”

“One of the things I’m interested in is looking at how we promote more equity in service. I would love it if the conversation about service was framed in that it’s rewarding and that you get something from it,” she said. “I would love to continue to be in those conversations about how we make it a safer and more equitable endeavor for everybody. Service is one of the best ways to get to know WOU as a whole and to feel like you are part of a community.”